To see all the pictures of the event:

Simon Ridley, Group Financial Director at Standard Bank, has been elected South Africa's CFO of the Year for 2014. The coveted award was handed out on Thursday 15 May 2014 by jury member Victor Sekese, CEO at accounting and auditing firm SizweNtsalubaGobodo, during a riveting black tie event in the Summer Place in Hyde Park, Johannesburg. The evening was attended by some 200 CFOs and prominent business leaders. Other prestigious awards were won by CFOs Colin Brown (Super Group), Anoj Singh (Transnet), John King (EOH) and Aarti Takoordeen (JSE Limited).

Accepting the award with gratitude, Ridley thanked Standard Bank for "allowing him" to fulfil the CFO role. "One of our CFOs, Ben Kruger, calls me one of the quaggas of the company. That means I can reflect on a few things." Ridley says South African CFOs are known worldwide for their honesty and skills. "Our CFO community is incredibly strong and punches way above its weight."

The experienced Ridley garnered the most jury points of 22 nominated Chief Financial Officers, a shortlist of the best finance leaders in South Africa business at the moment. A full list of nominated CFOs and jury members can be found on www.cfoawards.co.za. The CFO Awards are now a landmark event on the South Africa business calendar and at the end of the evening many CFOs said already to be looking forward to next year's event. 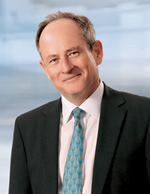 Ridley was CFO at Absa from 1989 until 1999, when he joined Standard Bank as Director Finance and Operations. Since 2005 Ridley is executive director and since 2009 Group Financial Director. In his interview with the awards jury Ridley described himself as a "career CFO" who tries being an "absolute partner" to the CEOs without "usurping responsibilities". Due to his longevity Ridley has been part of a series of successful international acquisitions as well as disposals, sometimes of the same companies or assets.

Chaired by Business Day's Semeyi Zake, the inaugural CFO Awards were a tremendous success with the cream of crop of South African finance leaders present. The formal dinner was preceded by a number of round table discussions and a Master Classes presented by Dianna Games (CEO Africa @ Work) with input from panellists Sabine Dall'Omo (CFO Siemens), Jo-Ann Pohl (CFO Standard Chartered), Tryphosa Ramano (CFO PPC), Andrey Bogdanov (CFO JTI) and Bikash Prasad (CFO Olam). After that, all eyes were on the awards show.

The Young Talent award, a pearl on any CV, was won by Aarti Takoordeen, who joined JSE Limited only last year but has made tremendous strides in modernizing the finance department of the stock exchange by letting it operate in a more strategic fashion. The award was handed to her by Taddy Blecher, CEO Community Individual Development Association and Maharishi Institute and one of the World Economic Forum's "Young Global Leaders of the World". He called Takoordeen an "incredible role model".

Takoordeen said that CFOs have a role to play in making the job more attractive for young talents, which was the reason why she gladly accepted the award. "I thank CFO South Africa for organizing this and I thank the jury for reading through 160 pages of interview material and making an informed choice between the nominees."

Super Group's Colin Brown received the Finance Transformation award and the Strategy Execution award from jury members Asher Bohbot and Anton Roux, CEOs of respectively EOH and Aon Sub Saharan Africa. Brown joined Super Group in 2010 when the company was "close to collapse", as he told the jury members in his interview. He managed to get the company back on the road to success by earning back the confidence of lenders and shareholders, crafting a B-BBEE shares scheme for employees and - ultimately - issuing a bond to raise finance.

Brown said he felt "overwhelmed" by the honour of winning two major awards. "I can't actually believe it. The story of Super Group is important here, because a few years ago it was one of the biggest disasters in the country." Brown had warm words for his colleagues at Super Group and for CFO South Africa. "It is such a great honour to win and the awards are such a great initiative for South Africa. It is something that has worked well in The Netherlands and tonight I am really impressed with our first inaugural South Africa awards evening."

The other double award winner of the evening was Anoj Singh, who first received the Compliance & Governance Award from jury member Claudelle von Eck, CEO at The Institute of Internal Auditors South Africa. Later, jury member Richard Etemesi, CEO South Africa & Southern Africa at Standard Chartered Bank, handed him the Public Finance award. Singh has propelled Transnet to become one of the most successful parastatals since his appointment as CFO in 2009, the first few years in and acting capacity. Singh thanked the judges for "recognizing Transnet" and was particularly proud of the Compliance & Governance award. He dedicated the award to his team, present in the room: "This one is for you, guys!"

The High Performance Team Award was won by John King, Group Finance Director at IT-solutions firm EOH since 2008. The award was given to him by jury member Rob Otty, Managing Director at law firm Norton Rose Fulbright SA. ""It is a great honour and it is especially nice to win this particular award, because EOH is really a great team," King said. "Our philosophy is that when you have the best people, you have the best business. So it is very gratifying to win this award."

Join our next CFO Event on Corporate Growth
We invite you to join us July 10 2014 at the Saxon Boutique Hotel and meet 100 top CFOs. Register here.

Join us on Twitter & LinkedIn
Stay up to date on what is happening in the world of finance by following us on Twitter @CFOSouthAfrica and LinkedIn. Next to that you can keep track of newly published interviews with CFOs and CEOs.

CFOs need to embrace disruption and uncertainty or get left behind

Community Conversation reveals that businesses will be left behind when they don’t embrace change.