Marnus Broodryk told the Finance Indaba that everything they believe about entrepreneurship is wrong.

To a chorus of admiring calls from the audience on day two of the Finance Indaba 2018, self-made millionaire and entrepreneur Marnus Broodryk shared the following markers of his success with the audience:

“I paid my school fees by washing cars until I was eighteen. By 24, I was a self-made millionaire. By 30, I was worth 30 million. I was the youngest Shark on Shark Tank South Africa. I’ve started many businesses. I live in Sandton. I wrote a book called 90 Rules for Entrepreneurs, which was named as one of the top-five books for 2018. When I go to Umhlanga, I stay at the Oyster Box. Today, I am part of a JSE-listed company, and I am on my way to building my first billion-rand company.”

The audience responded enthusiastically to this resume, but then he followed with, “But that’s just part of the story. That’s the part they use to introduce me at these talks and that the media write about. That’s the part everyone loves. But no one is telling the other story. No one is telling about the failed businesses. About the restaurant that failed dismally. About the tech startup that was launched to a lot of hype, but got not one client. About late nights at the office, and the people that no longer talk to me. About the boy who struggled with his sexuality. No one is telling you that. For the world it’s happiness, success and money, but at night time it’s fear, anxiety and self-doubt. No one wants to stand up on stage and be vulnerable. But that’s why I am standing on stage and telling you this. We need a reset, for what success is, and for what entrepreneurial life is. We need to reset those expectations.”

And that is just what he proceeded to do…

He cited a range of international research that shows that unrealistic expectations are the number-one reason why entrepreneurs fail.

“I have worked with hundreds of small business owners and they feel unfulfilled. They feel that they are failures and everyone else is crushing it. And that’s why I want to share my experiences over the last 33 years with you, and be damn honest. I want you to be uncomfortable, and I don’t want you to like me for the way I feel about the world. We live lies and believe we are failures because of the lies. Because the world is telling us that everyone else is nailing it.”

He shared the story of his childhood. He grew up ashamed of what he had and where he lived. For his 16th birthday, his father brought out a plate with two toasted cheese sandwiches on it as his present.

“I was devastated because my friends got quadbikes. They went overseas, but we couldn’t even go to Margate.”

He paid his way through high school washing cars, and then worked 15-hour days studying part time and doing his articles through a local accounting firm. But this, for the first time, gave him an insight into the realities of the friends who he thought had it all.

“The reality was completely different. Some had huge debt. Some had illegal business dealings. Some were just as unhappy as hell. For the first time in my life, I realised that you can never look at someone on the outside to really understand the inside.”

This was an observation that the audience responded to, and many nods were seen and affirmations heard around the conference room.

“People think that success has one definition, but that’s not true. Albert Einstein famously said if you judge a fish by its ability to climb a tree, it will spend its like believing it’s stupid. If we look at someone on the cover of a magazine, we’ll say ‘wow, I want to have that body.’ We look at Richard Branson and say, ‘I want that success,’ but we forget to consider his family life or his health. Our experience of success is very subjective.”

Marnus then shared the story of his childhood in Harrismith, where homosexuality was something you didn’t dare to mention.

“I didn’t dare to think about accepting it. But then I moved to Joburg and fell in love for the first time, with a guy, and was as happy as hell. For so long I’d lived a lie, not because I didn’t know it, but because the world didn’t accept it. If I hadn’t come out, I don’t believe that I would be as happy and successful as I am now.”

And then he shared another story.

“For 25 years, I loved meat. And then I started to question it. I said, ‘How can I be OK with very cruel factory farming? How is it OK to respect some animals and slaughter others?’ It’s because we are conditioned to believe it’s OK. And all of this led me to believe that the world can indeed be wrong.”

Another thing that he says the world tells us to believe is that money can’t buy happiness. “My experience tells me something different. I have so many memories of crying about money. When I started my first business I wanted to make R100 000 a month. I started the business, and things went great. I got to R100 000 and then I wanted R500 000 per month. Then I got to that and something happened… I couldn’t spend it all.”

He says that this was the point at which things fundamentally changed for him. This tallies with Gallup research of 1.7 million people in 164 countries that affirmed that money does make people happier – up to a point. And that point for South Africans is R116 000 per month, after which it increases their happiness no more.

“I listened to an interview with Bill Gates recently, and they asked him what does it feel like to have all that cash. What’s the best thing? And he said, ‘It’s amazing. I can buy all the books I want. I love reading.’ But everyone here can do that – but the richest guy in the word, that’s what he values most about being rich.” 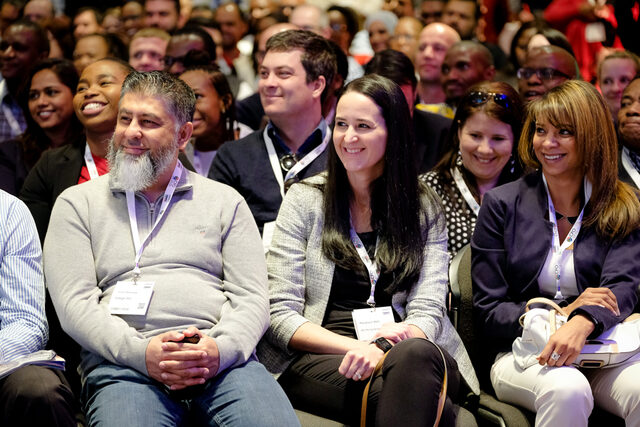 Marnus explained that entrepreneurs and business people are always in pursuit of the one big singular thing in life.

“We are always waiting for a destination that will never happen. But life is a journey and we should celebrate it every day. If you are sitting here, that makes you one in a million. You’re actually doing OK. I challenge you to go to a person on the streets of Delhi in India or right here in Sandton, and tell them how you drove here, or where you slept last night and what you ate for breakfast and they will think that you are absolutely in heaven. This is the first time I have done this talk. And my quest is to find 5,000 South Africans who can relate to this. Come and give me a high five, and let’s stop living these lies and start living our lives.”

The audience, who had been vocal in their agreement throughout the presentation, were silent as they appreciated his final message. As he walked out, people raised their hands to offer the high-fives that he requested.

Workday joins the Finance Indaba Network as a Diamond Partner

The enterprise cloud applications provider will be headlining the Indaba on 15 October.

The expense, invoice and travel management provider will be headlining the Indaba on 15 October.

BlackLine joins the Finance Indaba Network as a silver partner

Auto-Reconciliations in the Cloud enables efficiency of digital transformation programmes with up to 90% improvement in reconciliations time, and 75% reduction in write-offs.

Explained: How AI is shaping the future of ERP software

Maricelle Boshoff: Although AI is still in its early stages for ERP, the demand for the technology is rising.

CFOs must embrace automation to improve their financial processes

BlackLine gets its message out there: It's possible to have finance automation control and visibility.

Finance shouldn't cost your company more than 1.5 percent of your revenue

Altron Karabina's Paul Morgan says finance teams that use technology wisely can have a huge impact on results.