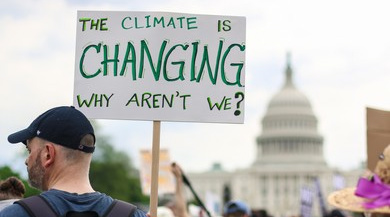 Tax changes should be targeted to help Covid recovery and boost fight against climate crisis.

Tax incentives should be used to enable positive global outcomes, such as economic recovery from the pandemic and averting climate crisis, according to a report by accountancy bodies into the tax system.

A survey of 8,000 people across South Africa, the G20 countries and New Zealand concluded that two-thirds (66 percent) were strongly in favour of using the tax systems to help individuals and small businesses to recover following the effects of Covid-19.

They were also very much in favour of similar tax breaks to support efforts to tackle “global megatrends”, such as the fight against climate crisis and efforts to support retirement savings, with 66 percent believing these would be appropriate incentives.

Perhaps surprisingly, the survey, from the Association of Chartered Certified Accountants (ACCA) Chartered Accountants Australia and New Zealand (CA ANZ) and the International Federation of Accountants (IFAC) discovered that support had fallen in 15 of the 20 countries, including South Africa, for international collaboration on tax.

This is despite the fact that 2021 has seen historic advances in international tax cooperation, including agreement by G7 countries to enforce a minimum rate of 15 percent corporation tax.

The Public Trust in Tax study, which was carried out in the first quarter of 2021, follows two previous reports on the subject in 2017 and 2019.

Other key findings included insight on whether taxpayers in different countries felt they were paying a “reasonable amount of tax”. Overall, most respondents were likely to agree that their tax rates were reasonable across all pay grades.

The picture was not much more positive about taxation of companies. Only 16 percent believed South African companies paid a reasonable amount of tax and just 7 percent when it came to multinational companies.

Despite this suspicion, 49 percent of people overall were in favour of using tax incentives to attract multinational business.

Accountants are also seen to contribute to the efficiency of the tax systems by making them more efficient, effective and fair.

The survey also asked questions about the trust people in various countries placed in their media and social media on the issue of tax. Social media was the least trusted source, distrusted by more than 40 percent and traditional media fared little better, scoring over 30 percent for distrust.

In South Africa, there was a very high level of distrust in social media (50 percent) and only 17 percent expressed any trust in it on tax issues. Traditional media was trusted by 36 percent but distrusted by 29 percent.

“The relationship between taxpayers and governments, and between businesses, society and tax systems, will be fundamental to the shape of the economies that support us all, over the coming years.

“Public trust is central to tax morale, which is the tendency for individuals and businesses to pay their tax voluntarily and without intervention by tax authorities.

“Anecdotally, many respondents stressed the importance of financial education from an early age, so that people understand the purpose of tax. Our experts agreed that citizens need to comprehend where their tax money is going and what benefits it pays for.”

“Alongside the uncertainty of the pandemic, this year has also seen historic advances in international tax cooperation, with political agreements at the G7, G20 and OECD Inclusive Framework that began not long before this series of reports.

“Tax policies to help address challenges such as climate change and ageing populations are no longer issues on the horizon, it’s here and now. Well-functioning tax systems and high levels of taxpayer trust backed by a robust accounting profession to design, implement and navigate the tax implications are vital as we look to shape a better future.”

“As leaders in the global accountancy profession, we are proud to see the high levels of trust in professional accountants. This embodies the profession that we know. At the same time, we understand that there is always more to do to sustain and strengthen that trust.

“No matter the cultural differences or divergent views on who is paying enough taxes or how the funds raised should be spent, the correlations between social well-being and an effective tax system and economic growth are clear.”