Economic uncertainty, a weakening rand and government policies are the most pressing concerns for CFOs in South Africa. Although a decent number of finance leaders are optimistic about their own companies, they are generally pessimistic about the overall economy. Results from the latest quarterly Duke University's African Business Outlook survey, which can be exclusively reported on by CFO.co.za this morning, reveal a mostly gloomy picture.

Seriously worried? Join us at the Finance Indaba Africa

Duke University has surveyed CFOs around the world every quarter since 1996 and since 2013 the South African Institute of Chartered Accountants (SAICA) is involved in creating the African Business Outlook. In December, 60 African CFOs from a wide range of industries participated in the survey, of which 55 from South Africa. "We are very much interested in expanding the number of respondents, both in South Africa and beyond," says Duke University's Professor John Graham, who is in charge of the Global Business Outlook. 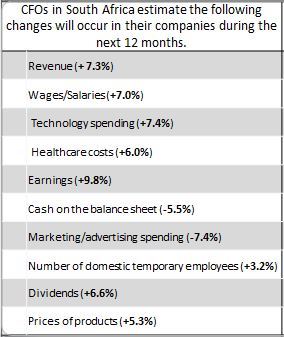 African optimism about the next 12 months remains low, the survey concludes, with the 10 biggest worries for CFOs being:

African CFOs believe that there currencies will devalue relative to the US dollar in 2016 with as much as 4,5 percent. They indicate that the following factors will affect capital spending plans over the next year compared to a "normal" economic environment:

When asked what has improved the growth rate of productivity within their companies, 83% ascribed this to automation and technology, 74% saw the benefit of process change and 64% said a new business model had helped.

While 41% of CFOs believe that increased payout of dividends or share repurchases constrains investment, most finance leaders don't believe that's the case. Around 57% of South African CFOs report that the nature of their businesses will require more intense capital expenditures in future years. While the negativity about labour costs was relatively muted this quarter, most South African CFOs believe that economic conditions have no effect or a negative effect on the growth rate of productivity within their companies.