Just like CFOs, internal auditors have been widening their scope over the last few years, says Claudelle von Eck, CEO of the Institute of Internal Auditors South Africa (IIA SA). “Internal auditors are moving beyond compliance, beyond being seen as the watchdog. These days they need to be the right hand to audit committees and a best practice advisor to the organisation as a whole.” That role is not limited to a financial one, Von Eck emphasizes. “Often, when it gets to the financial reports, it is already too late to do something.”

The well-spoken and determined Von Eck – whose name betrays some German ancestry – has been working for IIA SA since 2006 and was appointed CEO in 2010. “When I was offered the job, the key question for me was: do I want to be the voice of the internal audit profession? I said yes. This is not a job, it becomes your life. Internal auditing is such an important profession. I feel like I am in the service of my country, through the organisation I work for.”

Von Eck describes IIA SA as a “small but complex organisation” with 33 permanent staff and 6 more positions recently approved by the board. “My job was to turn the ship around. I am not good at maintaining a status quo as I get bored easily. I can become destructive when I am bored. In the last few years we have started doing much more advocacy and we offer much more in the technical department – we have really made a quantum leap.” Recently the IIA SA has also become the second largest institute in the IIA global network, after the United States. “We have overtaken the UK. At the moment we have about 8,500 paid up members and in total just under 10,000.”

According to Von Eck internal auditors in the private sector typically report administratively to the CEO and functionally to the audit committee. “We advise against reporting to the CFO, although this sometimes happens. The CFO oversees many parts of the organisation that are audited, so we don’t think it is wise that the same person is responsible for the audit.” At the same time Von Ecks calls on CFOs to work more closely with the internal auditors of their company, because they’re working towards the same goal. “Instead of having an adversarial relationship with CFOs, internal auditors should be seen as a welcome pair of extra eyes and ears that provide assurance. In successful organisations we see the relationship between CFOs and internal auditors growing into partnerships.”

Von Eck acknowledges that in practice there sometimes is a fair amount of hostility from the finance department towards internal auditors. “There is that idea of ‘he is coming to expose me’. We talk about those things with our members and emphasize the importance of building relationships. We are not there to catch people out or play policeman. I compare it with the Argentinian tango. If one can dance, but the other can’t you don’t get a pretty picture. If you both hear the music and interpret it and almost feel what the partner is going to do before he does it, it looks great.”

Approximately 40 percent of the IIA SA members work in the public sector, which is plagued by issues of bad governance, lack of compliance to laws and poor or non-existent reporting levels. On top of that, highly skilled and experienced internal auditors usually prefer a job in the private sector. “There are big problems in the public sector when it comes to governance. You only have to look on the website of the Auditor General to know what the extent of the problem is.” Together with the National Treasury, the IIA SA is currently rolling out its job training programs, which amount to serving articles,for public servants in internal auditing departments. “The Treasury also has a representative on our education and training committee, so we work closely together.” 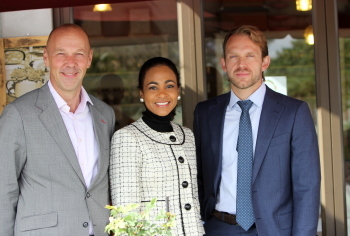 Von Eck is a specialist in institute management and change. “I am not a Chartered Accountant or internal auditor myself. Internal auditors are people who deliver analyses and critique, which is quite different from a decision making role like mine.” She has noticed there is a small percentage of CAs that makes the move into internal auditing. “Typically they have trained to be an external auditor, but find the broader scope of internal auditors more exciting. It is important to realize that the background of internal auditors is very diverse – we’re not only talking about finance people here. At a company like Eskom there are for example a lot of engineers in the internal auditing team.”