When a global corporate underwriter like Allianz gives South Africa the green light, it’s a sign that something good must be brewing. “South Africa is a springboard into Africa for many companies. We follow our customers into the continent,” says Burkina Faso-born Delphine Maidoo, who has done a substantial amount of homework to prepare for her role of CEO in Johannesburg for Allianz Global Corporate & Specialty (AGCS). Her conclusion: “We’re investing in Africa, because we believe in the continent.”

CFO South Africa recently spoke to Maidou in the Allianz offices. She explained that although Allianz, which has its headquarters in Germany, has had a presence in Africa for years, mainly in support of the African operations of big multinationals, the company has made a serious move into the continent since last September. Headed by Maidou, who previously worked in Canada, AGCS now offers its services to an increasing number of South African and African clients. The operation in Johannesburg is growing quickly. This is not just an experiment by the multinational underwriter, says Maidou. “There is no looking back.”

Allianz offers companies property, financial lines, engineering, marine, liability and energy insurance from its South African office. The company also provides access to all the complementary products and services offered by the Allianz Group and its network in over 150 countries. They also offer specialist risk consulting support. “We usually deal with a company’s risk management unit, which tends to report to the CFO,” says Maidou. 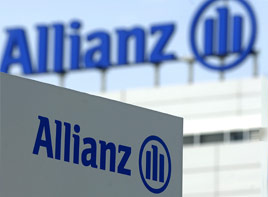 Although AGCS has set its sights firmly on Africa now, Allianz has been in South Africa since the 1980s in different forms. “Historically we have been servicing global companies that were investing in Africa, like Heineken,” Maidou says. “Since September there has been a complete shift and we’re focussing our efforts on insurance for Africa-based companies. South Africa is a springboard for the rest of the continent.”

This change only came after Maidou headed a project team of mainly African Allianz employees in January 2012 tasked with investigating the opportunities in Africa as a result of the firm’s decision to have a more significant presence in emerging markets. “We all had full time jobs at the time, so we did this research on the weekends and in the evenings, but there was a lot of passion behind it. We were asked to tell the company if we should move into Africa or not and what this move would entail. We did a lot of work and did not use one consultant. The decision was to make the move and I was asked to come to Johannesburg and lead the changes.”

“It is interesting for me personally to establish a strong brand in Africa,” continues Maidou. “There were a lot of concerns about finding the right people locally, but we have been pleasantly surprised.” Maidou has recently hired twelve new people, mostly recruited from other insurance companies in South Africa. “We have a strong team that understands the market locally, but it’s quite a culture shift for AGCS from a service entity for the global company to a local organisation looking for business. I have spent a lot of time making the company ready for expansion internally, but I also had to be market facing and get known – fifty percent of my job is being visible. As an insurer we want to meet the person behind the risk, so we’re not just a piece of paper. Understanding the person behind the paper puts your mind at ease. We’re not only an invoice at the end of the month.”

Being CEO of a very strong brand helps Maidou fortify the position of AGCS in South Africa. “We are not a market share grabber. We want to have a strong presence and be the lead insurer in the areas where we have expertise. We want to grow, but we are not rushing to grow. At the end of the day, we are an underwriting: for the right risk, we make capacity available.” Nevertheless, the opportunities for such a reputable insurance firm are growing with the growth of the African economy and Maidou admits she already has to rent more office space than planned. “I think we will double our size in two or three years.”

Allianz now has a presence in fourteen African countries. “We have a double AA rating, the strongest financial position. We haven’t been overly affected by the crisis either,” says Maidou. “Companies maybe pay a bit more with us, but your insurance is secure.” Although many Allianz-products were already available for large South Africa firms, the move to boost ‘Johannesburg’ is already paying dividends. “Lots of CFOs and risk managers in South Africa like it when the premium ‘stays here’. We are now making our capacity available locally and are hiring locally. Previously, CFOs asked us ‘why should I pay a premium overseas?’”

Maidou has seen that “a lot of South African companies work on risk as if they didn’t have insurance”, a positive sign for an insurer. However, she has also noticed “there is not always enough info for us to assess the risk” at South African companies. “If we have time, we go on site and assess the risks ourselves, for example at a construction project. Our recommendation can be to spend more money now, to save insurance premium or a loss later on.”

The lack of required risk information does not surprise the experienced Maidou, as her project team had already concluded as much during their assessment of the continent. “We were a global company that didn’t know Africa that well, so we had to learn everything about the market here. Our capacity comes from Germany and as a regional office we have to be able to explain it to them when there is a problem. If we do not have enough information, we have to explain what we do to mitigate that.” Part of that mitigation is professional risk advice. “It is better to prevent a loss. If there’s a fire in a building, it still is destabilizing even if the insurance pays out.”

If you also would like to share your ideas with the CFO community, don’t hesitate to get in touch with us to arrange an interview. Please contact Jurriën Morsch on [email protected]