Finance Indaba Africa off to a roaring start with a thought-provoking presentation on land reform.

The Finance Indaba Africa 2018 got off to a roaring start on 3 October at the Sandton Convention Centre with a presentation by Mqondisi Gumede, speaker and knowledge merchant at Iconoclast Knowledge Bureau and self-proclaimed “master of uncommon sense”.

Mqondisi kicked off the programme with a topic that is at front of mind for South African business and society today – land. But it wasn’t obvious from the start of the programme what stance he was going to take.

He presented a variety of statistics and figures to build his argument. He started in 1789, when people from the cities went into the tranquil countryside, to the seat of the French Monarchy, to make a demand for bread. “The people they were demanding bread from ate cake. The people they were demanding it from didn’t know bread. They were eating cake, which has a higher calorific content. The great princess in this tale responded, ‘I know not of this bread. Give them cake.’”

For the French nobility, Mqondisi points out that the ingredients for creating a national wealth cake were in place: Land + Labour + Capital.

“It is no stretch to say, if you see the palatial accommodation of the landed gentry, that land was the dominant ingredient for economic success in 1789 France. If you had land, you could house the people to build you chateaux of this kind. Not every noble was quite this rich. Some had to make do with smaller accommodations. But however you look at it, it was a much better life than the backbreaking work of the peasantry – the proletariat demanding bread.”

However, Mqondisi then showed that land as a percentage of GDP has plummeted since the 1700s. Today, the income generated from land ownership is just more than 10% in Britain and if you take the average of high-income countries, it is only 4.5% of GDP.

He then showed that there is complete randomisation between a country’s land mass and the amount of GPD per capita that each country has.

“Even for an optimistic guy like me, no correlation can be drawn between the amount of land available and the amount of wealth that you have.”

He then looked at the world’s most valuable companies, and considered their land and buildings as a percentage of their value. For Apple, this amounts to 1.48% of wealth, and for Amazon, 2.61%.

He showed that this is what the South African cake looks like: South Africa’s GDP per capita is $5 274. The average for the top nations is $46,082 with more than five million people. “However we express it, however energetically we protest, what we vociferously demand are the same lifestyles as the people we can observe in other rich, industrialised nations. This to me signifies a price - $46 082 of GDP per capita. That is what we need to bake.”

He then turned to figures from the Statistician General that stated that the value of land in South Africa is R538 billion. Or, if work in progress is taken into account, R1 trillion.

“So if we were to take this land and to give it to all the adults – children can make do without land – we’re dividing it among 30.2 million people. We would get R36 180. It’s worth noting that the minimum wage in South Africa is R42 000 per year, which is not a number I like. So the R36 180 once-off fee would not even approach the minimum wage,” he said.

He then pointed out that Germany, in the wake of World War I, were so poor that they could only afford to print deutschmarks on one side of the paper. And yet they were able to rebuild their country. They did it again in the aftermath of World War II and this time they added an interesting additional solution.

Due to their joint steering of companies with more than 2,000 employees, they were able to arrive at valuable determinations to both parties.

“They realised that their post-war economy was not going to be sufficient to meet their needs. So they decided that when capital was being put into big business, the shareholders and the workers would share the responsivities of setting up the company. They would jump into the same ship and decide how the company would be formed. What happened was that when both the workers and the shareholders were looking at the returns they expected, they built companies that benefited both. Building a cake large enough and for the benefit of all can’t be the sprinkling on the cake – the shareholders can’t set up the business first and then provide for the workers later. It has to be baked into the batter – the flour of the land and the water of labour and the capital that is the eggs and milk and all that other stuff. And once it’s baked into the batter, you can never separate those things out again.”

He says that this presents a solution for South Africa, where we live in a dual economy. 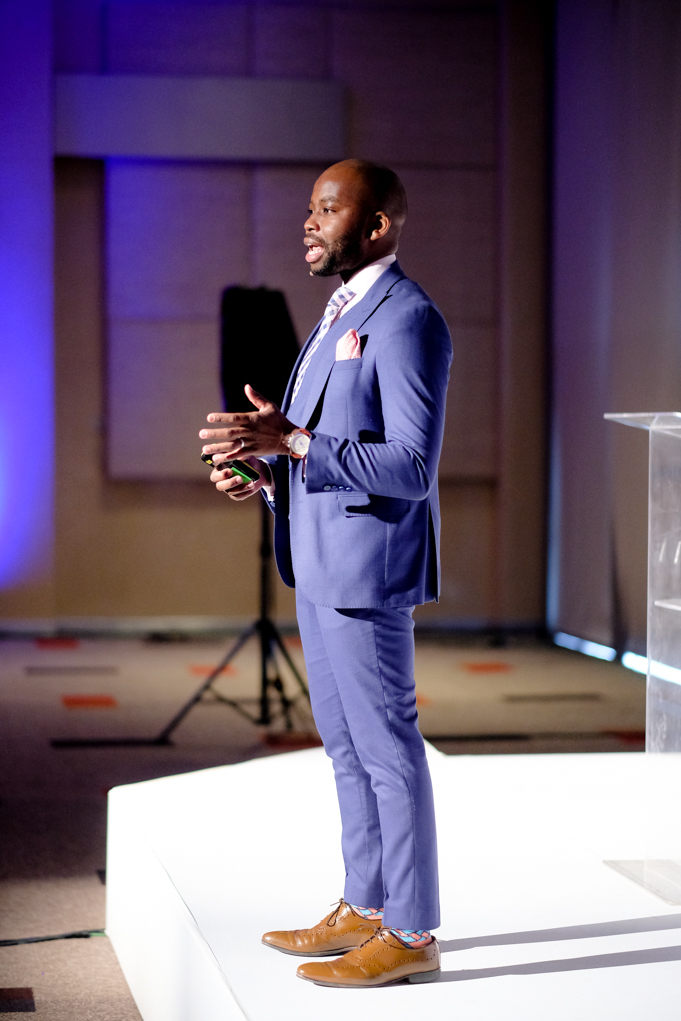 “It’s better to be in one ship – the Germans call it ‘mitbestimmung’ which means co-determination. And this is a model for us to stop the diversions of things that do not give us even one year’s wages. What we should be asking for is what we need. The macro-economic pursuit for every one us of here to bake a cake that produces that $46 082.”

On this resounding note, Mqondisi concluded his presentation. The audience’s appetite whetted for further thought-provoking content, they headed out to attend other presentations and meet with partners on the expo floor, two days of learning, networking and inspiration ahead of them.

In a post-presentation interview, Mqondisi admitted that he had run out of time and had still more provocations that he wanted to share. In the first instance, he thought it would be useful to deracialise the capital class and address the issue between haves and have nots.

“This adds a marginal amount of black people to the predominantly white haves and will exclude a marginal number of white people.”

He boldly asked whether the capitalist class has what it takes to put into a similar pot with workers in a company 49.9% of their capital for a return that will not only make the workers far richer but also leave the capital contributing class far better off.

With raised eyebrows, he noted that his pitch should be considered for no other reason other than that everyone else is far more likely to make much more money. He cited that the shareholders of German multinationals are far richer in the scheme than they were likely to be without it.

Mqondisi is quick to share that he is a devotee of appealing to someone’s self-interest and believes that a voluntary contribution of land and other capitals will lead to a greater likelihood of reaching the GDP per capita target of $46,082.

He sees that as a key driver of the German economy, the catalysing companies necessarily have to think for “we and me” and therefore build far larger companies to meet that expectation.

He thinks it’s crazy to be in a place so desperate that people are calling for the land to be taken, when a voluntary inclusionary scheme with productivity with its goal has worked for another large industrialised nation. 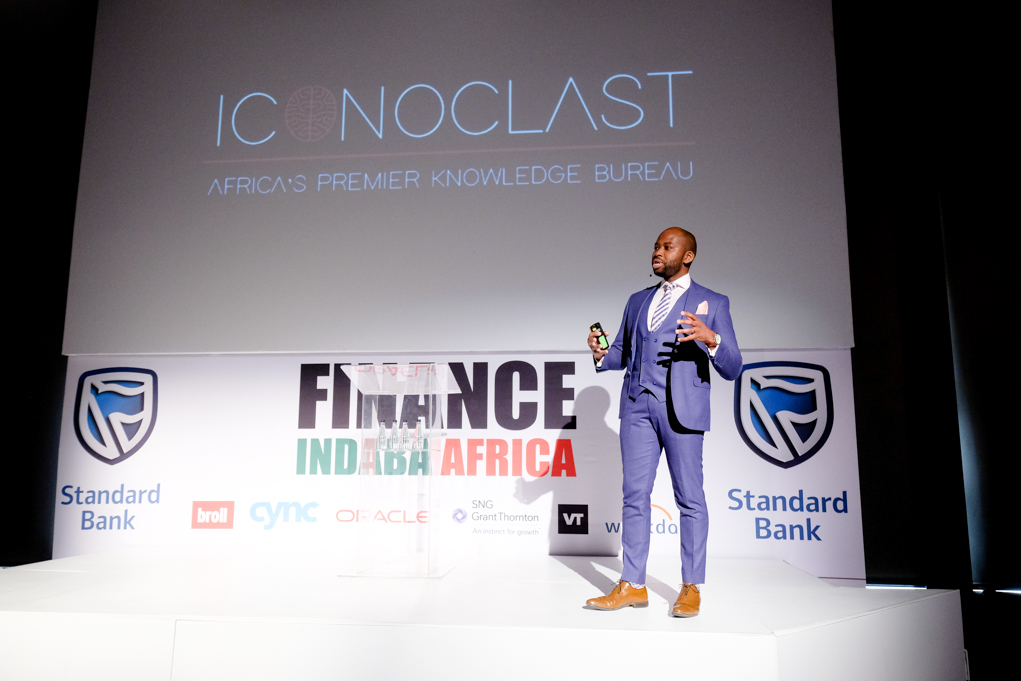 Mqondisi was keen to stress that land should be contributed to the mix perhaps in greater measure than other capitals but ensuring that the outcome leaves contributors of land and other capitals and the workers in companies into which contributions have been made with a clear line of sight to our targeted GDP.

Mqondisi said that it seems that the land redistribution program as has been conducted since 1994 should be made faster so that we can see who else desires land as he points out the record of the register so far shows that a significant portion of the people would prefer another form compensation, which currently is cash.

In order to make the contribution worthwhile he suggests both capital contributors and works would need to more than double the size of their sales, value and output so that it has been worthwhile. Mqondisi says he suspects that workers and capital contributors will have to conclude that South Africans need to sell more to people outside of South Africa harkening back to his encouragement at Finance Indaba in 2017.

However land reform is concluded, he says three things need to happen: justice and social justice must be pursued to the extent that they can be, and that land must been seen as an ingredient that gives poor South Africans the luxury of choice that a high income brings but that this can’t be brought about by land alone.