As a leader, are you a router or a firewall, asks Futurist Craig Wing

“Leaders are sometimes unable to act. They stand frozen with too much information. But in today’s world you need to be able to act fast. In the context of how quickly the world is moving, you cannot wait for new information and rest on your laurels. The next big thing will be for leaders to act on imperfect information,” says Craig Wing, partner at FutureWorld International, an organisation that helps corporates understand the emergent future and how technology will affect their businesses. Bursting with energy and ideas, Craig will be speaking at the upcoming public sector breakfast on 13 September, where he will talk about some of the game-changing technologies currently shaping our world, and how best to use these.

"The challenge will be for CFOs to ask how they will react to the changing future; irrespective of technology, how do you put the customer at the centre of everything you do?"

What are some of the challenges that today's global context presents?
"We're entering the perfect storm. The world is fundamentally changing: technology has completely reshaped every facet of our lives. There's the trust crisis. There's a shift of power - power is decentralising. There's the issue of speed - things are moving far more quickly these days. There are different non-traditional competitors and convergence of industries - is your car a shared resource, is your bank your insurer? But the biggest change of all demographics of people. The world has always had different demographics but society is fundamentally changing. We are past a world of command and control and are starting to ask how we can find solutions together where no one is left behind."

What are some of the global trends affecting leaders today?
"Leaders are sometimes unable to act. They stand frozen with too much information. But in today's world you need to be able to act fast. In the context of how quickly the world is moving, you cannot wait for new information and rest on your laurels. The next big thing will be for leaders to act on imperfect information. To ask, "How do I understand the world and how can I see the world within various different boxes?" The best solution is one formed from the viewpoint of various stakeholders together. Ask, can you as a leader really think about the future in a pertinent way? It's not about a two or three-year plan. Within the context of the perfect storm, what is the vision of the leader, what is the 'why' that you inspire in people? What's the path that you are moving towards?"

How is technology and the emergent future changing business and in particular, government?
"Government is essentially trying to repave the cow path - adding a technology layer over existing process and controls. This is fundamentally flawed. To give you another example, previously, the business model of many banks was about foot traffic. They said the world they are in, and which they will always be in, is branches. Fast-forward and introduce the internet. Now you've got the digital bank and the normal bank. Digital bank may already have surpassed profits at a lower expense base than traditional banks. The problem is it's the same bank. You need to see them as the same, not separate bassed off a history when you had no idea how to integrate the internet into your more traditional business model"

"Consider blockchain and Bitcoin. This is fundamentally huge. How do we decentralise money flow and control? How do companies and regulators become disruptors in the industry? Some of the other technologies that will have a huge impact include artificial intelligence, 3D printers, which can decentralise production, self-driving cars and new innovations in energy."

How can one leverage corporate culture to accelerate change and optimise business?
"In my mind, these must go hand in hand; strategy and culture reinforcing each other. There is this misunderstanding that there exists a perfect culture - you hear about Google and Facebook and open innovation and free time. But that's not necessarily the best implementation of culture for every company. Imagine a logistics company where employees' primary job is to take boxes off a truck and move them around. That company would fall to pieces if they offered their staff 20% time to innovate new solutions. So it's a question of identifying right up front the kind of culture you want in an organisation and ironing out the elements from there. What's important is for the leader to ask, why do we do what we do. From there you can leverage everything else, because that will underpin everything else in the organisation.

What is key as far as changing corporate DNA is concerned, to create a happy and efficient workforce?
"A lot of it is predicated off a common vision. Why am I here? What's this organisation's vision - its MTP, the Massively Transformative Purpose that's beyond profits? It's having a common purpose, and being clear on what you trying to achieve. You need to think about "why" then "how" do you operate as a company with transparent and open value sets. It's about not blocking. Ask yourself - are you a firewall or a router; do you hinder or enable? That's a big part of this whole equation."

"It's important to allow people to work the way they want to. I'm not talking about giving everybody free reign, just think about it logically: How can you hire the most talented people and then constrain them in terms of how they want to work, essentially constraining the creativity and innovative thinking you hired them for in the first place?"

"Something else that's got to go is the notion of employee annual feedback. You work for a year and then at the end of the year get feedback from your manager on something that happened months ago, perhaps in Q1. You need to implement constant feedback loops, not bi-annual or annual feedback sessions."

What can CFOs do to accelerate change?
"Don't look at the short-term Return-On-Investment (ROI), because a lot of those ratios are predicated on a short-term view. ROI is a flawed metric. Part of the challenge we see in the world we are in now is looking at immediate returns. So CFOs must understand that the decisions they make today have a longer term view. Rather take decisions slower and take into account the future. You need to ask how do you learn, unlearn and re-learn. So how do you turn this instead into a return-on-innovation (ROI) or return-on-futures (ROF)?"
"If you look at some of the greatest companies, especially those in Tech - Google, Facebook, Apple and Amazon - they say we're going to take our money and invest it in innovation to create a future we can dominate." 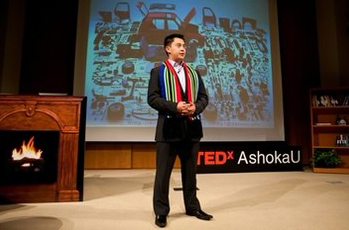 Craig is an "engineer by qualification, an entrepreneur by passion, and a Googler by spirit". He holds two Masters degrees and two provisional patents, and has started four companies over the years, including a non-profit in Silicon Valley. His experience includes advising the Department of Science and Technology, Allan Grey and Deloitte, although the culmination of his "corporate" career was as Head of Small Business Marketing for Google South Africa. He was previously selected as an AshokaU changemaker, driving the importance of global social entrepreneurship.