The Chinese currency renminbi (RMB) now accounts for more than 30 percent of payments between South Africa and China. According to recent SWIFT data, the number of South Africa’s renminbi payments increased by a staggering 191 percent over the last two years. 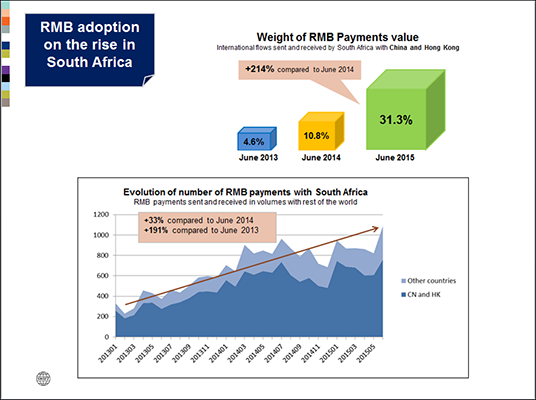 The SA Reserve Bank's indicators showed increases in eight out of 10 components.

RMB Holdings' Herman Bosman steps down from FirstRand board

Herman will be stepping down as RMH completes the unbundling of its shares in FirstRand Bank.

RMH's Herman Bosman: The unbundling ends a multi-decade relationship between RMH and FirstRand.

Markos joins FNB South Africa from RMB, where he has been serving in finance roles for 12 years.

Kruger has worked in a variety of roles in the FirstRand Group, including CRO at RMB.

CFOs reveal their worst days - and what they learnt from them

Having to let people go, self-doubt and regulatory changes keep these CFOs awake at night.