David Gleason, Owner of DealMakers Magazine: There are deals cooking

“There are several merger and acquisition deals on the table at the moment,” says Business Day columnist David Gleason, who publishes the quarterly M&A magazine DealMakers. He says those deals are being “worked on and discussed”, but they’re “cooking in the pot for now” because of the political uncertainty in South Africa. “We have to get through the elections and see what sort of cabinet we will get. If it is a team of reasonable people, it will unlock a lot of energy for the economy.”

With more than twenty years of experience as a business journalist in South Africa and a particular interest in mergers and acquisitions, Gleason is in a strong position to assess the current dynamics of the South African economy. “M&A has not been particularly energetic of late,” he says. “It has been slow and the value as well as the volume of deals has been disappointing.” That doesn’t mean the business world is short of investment capital, says Gleason. “There is a hell of a lot of money in the corporates, but it’s currently not being spent.”

Gleason says foreign investors and market watchers need to understand that politics plays a much bigger role in the South African business world than in, for example, Europe. “I think the reason for the underspending is the uncertainty about the country’s economic direction. There are elections looming and corporates are currently sitting on their hands to wait and see what happens. We used to be the gateway to Africa, but we already stuffed that up. We’re being overtaken by countries like Kenya, Rwanda and Nigeria.”

There seems to be a considerable faction within the governing party (the ANC) that is in favour of a larger role for the state in the economy. Some of this faction seems to be considering ways of nationalizing private enterprises. Labour unions are also influential and the make-up of the current government – “with as many as ten communist ministers” – worries Gleason. “Politicians need to realize that there is considerable dependence on free enterprise for tax revenue. I wish they would see it. Former president Thabo Mbeki already predicated that there would one day be a split in the alliance between the ANC, communist party and the unions. It can’t be soon enough, but I think it will probably take a while still.”

The stalling of the South African economy and the ‘interference’ by politicians is something that creeps up on the country, says Gleason. “If you live here, you get used to it. It is like the story of the frog that is comfortable in a pot of water, even when it’s slowly being heated up. The temperature increases very slowly and the frog keeps thinking it is normal, until he’s about to die and it is too late. That is what happens in societies too, not only in South Africa. For example, we are so desensitized by the high crime rate that it doesn’t even make the newspapers anymore. It barely gets reported on.”

Yet, the South African economy could take a turn for the better, Gleason says. “I can’t predict the next five years, they’re very uncertain. We’ve got a National Development Plan, which is actually very good and talks about infrastructure investments. It seems to have been adopted, despite huge opposition from union federation Cosatu and to a lesser extent the communist party SACP. It is important to get the infrastructure growth plan into action as soon as possible. Recently a huge contract was awarded by the Passenger Rail Agency of South Africa (PRASA), the biggest contract ever given to Alstom. Those are good developments, although the first lot of locomotives is going to be made in Brazil. Of course, it is crucial that they get a factory going here as quickly as possible.”

Gleason says the unpredictability of the South African business world makes it “pretty exciting” to follow it as a journalist. “For example topics like Broad-based Black Economic Empowerment, B-BBEE – some companies make a mess of it, some a success. Generally, South African business is led by adaptive, highly intelligent leadership. Executives often find solutions that you don’t see anywhere else.”

B-BBEE has been one of Gleason’s bug bears for a while now and he often criticizes the policy in his columns. “Doing business is very difficult, if not impossible, in this country if you don’t have B-BBEE credentials. That does not only relate to ownership, but also to having black people in positions of authority. The policy has been in place for more than a decade and it will probably still be another ten years before we see some results.”

Of course B-BBEE is meant to right the wrongs of the past, when black South Africans were kept out of the main economy. “It is very important to involve the greater majority of South Africans in the economy and in the business world, the question is how,” says Gleason. “I am not sure a B-BBEE policy where owners have to sacrifice some of their shares is the answer. We’re trying to force feed black people into top management who would not make it otherwise. Successful black entrepreneurs like Herman Mashaba, who is now the chairman of the Free Market Foundation, would make it anywhere under any conditions. They don’t need B-BBEE.” 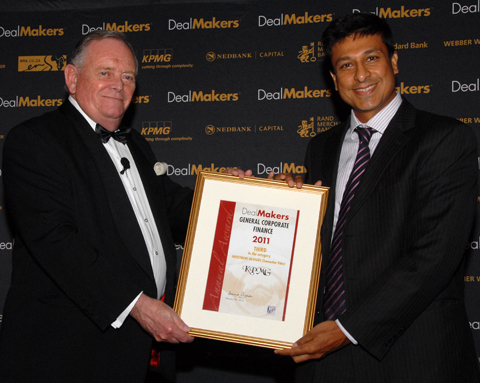 Gleason is not all doom and gloom. For example, he praises the quality of South African Chartered Accountants. “Our CAs find they are acceptable almost anywhere in the world. They are part of a rigorous society and their exams are tough.” That also has its effect on the solidity of local businesses, says Gleason. “There is no doubt that successful firms are the ones with strong cultures, which are normally driven by a good CEO with a good CFO behind him or her. The role of the Financial Executive stands out, usually in the background, as the one who judges which enterprises are good and which are foolish.”

While uncertainty reigns domestically, many CFOs and their executive teams are looking elsewhere on the continent for growth opportunities. Although ‘Africa’ is currently a buzzword, Gleason warns against too much optimism. “There are no big opportunities in Africa, really. There is now and then a big dam to be built or a big transport operation to be set up. But there are not many African countries that get looked at by companies out of the FTSE 100 Index. The size of deal making is quite small and there are a lot of complicated, different jurisdictions and regulations across the countries.”

If you also would like to share your ideas with the CFO community and you want to be part of the leading CFO South Africa Community, you are most welcome to get in touch with CFO SA. Please contact Jurriën Morsch at [email protected]