Harmony Gold CFO Frank Abbott is certain that the mining company will be able to continue its upward trajectory. He set this on Thursday during presentation of results for the six months ending 31 December 2016, attended by CFO South Africa.

"The higher rand-gold and US dollar-gold price received over the last year has improved the profitability of our operations and enabled the company to enter into favourable hedging arrangements," said Abbott.

The company delivered a set of robust quarterly results that give investors reason for optimism, with the South African mining house reporting a first-half profit on the back of earnings lifted by gains from increased production and currency hedges.

The company was able to drive net debt down to R289 million and increased production by eight percent to 553 862 ounces, realising a three percent rise in grade in the six months ended December 31, while it announced that it would pay a dividend of 50c per share. Headline earnings per share were 150c, compared to a loss of 103c per share reported for the same period in 2015. In addition, all Harmony operations bar the Target 1 mine produced positive cash.

"We achieved all we set out to in the six months from 1 July 2016 to 31 December 2016. We delivered on our strategy to mine safe, profitable ounces and increase our margins. Our cash flow continues to be strong, which allowed us to declare an interim dividend - the second dividend in 12 months. Harmony has a sustainable investment case based on prudent financial planning and on capital allocation that is aimed at enhancing the value of our portfolio," said Harmony CEO Peter Steenkamp. 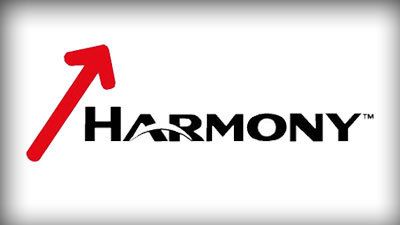 Revenue inched up in the face of a lower average rand-gold price on the back of thanks to gold and currency hedges implemented in 2016. These added R700 million to top-line income, with an unrealised benefit of R2,2 billion at the end of December.

When questioned about market uncertainties influencing dividends and capital expenditure, Abbott replied that he was confident that the firm would continue on an upward trajectory.

"The dividend is not a once-off. The board policy is to look at capital and cash flow before making a decision, but the intention is to pay a dividend. On a funding basis, we can fund our capital expenditure for this period out of working capital, for example. In the 'zero net debt' situation we have to be in in the next quarter, we don't see any problems in securing funds."

Steenkamp came under fire for revitalizing the controversial Hidden Valley project, which his predecessor Graham Briggs had looked to close, and questions were raised about whether the cash-rich miner's ongoing aggressive acquisition strategy to replace mines nearing the end of their life cycle would result in sustainable profitability. Harmony is the sole owner of the Papua New Guinea mine, after buying out Newcrest Mining for $180 million. It is expected to add 180 000 ounces to production after an expansion plan is conducted.

"Technically, there's no reason why this mine cannot do well. The biggest issue was the overland conveyor, but it hasn't had any breakdowns in 12 months. Hidden Valley is an asset that we are familiar with. We have been operating in Papua New Guinea for the past 12 years. Harmony is a strong brand in the country. We know the orebody, have strong relationships with government and the communities, and have a robust reinvestment plan that will generate a return for our shareholders." Steenkamp said.