Editorial: what to make of Walmart's slow growth in Africa?

Ever since the American retail giant Walmart bought Massmart as part of their 'Africa strategy', there has been an idea that its brands like Game, Makro, Dion Wired and Builders Warehouse would be popping up like mushrooms across the continent. But is hasn't gone all that quickly. A recent Reuters describes the growth of Massmart as disappointing.

Despite its powerful U.S. backer, South Africa's number three retailer, selling everything from food to electronics, has added fewer than 10 stores to the existing 25 outside its home market since 2010, lagging rival Shoprite, which doubled its outlets to 300.

And Massmart isn't the only South African retailer that has been struggling to expand on the continent. In Africa's biggest economy, Nigeria, Woolworths has closed a store, citing high rental costs and tax, and franchise group Spar says its local partner open only 5 of 20 planned stores so far. Pick n Pay closed its franchise stores in Mozambique and Mauritius, because the company was not making any money. Even Shoprite, generally an African expansion success story, closed the doors of a big supermarket in the Ugandan capital Kampala last month.

Many retailers are finding it tough to get goods from ports to the shelves in a reasonable time, but Shoprite boss Whitey Basson nevertheless speaks of an "insatiable demand" for big brands in Africa. Case in point: after the retailer opened 5 stores in Angola, it sold more Red Bull cans in that country than in nearly all 400 stores in South Africa. It does seem that Shoprite, Pick n Pay and even Spar aren't doing so bad at all, and closed shops are rather a sign of necessary risk taking than of worrying signs that Africa growth is waning.

But what about Walmart?

According to Reuters some American analysts want Walmart to focus on the Americas only, due to the slow roll-outs in Africa and lesser growth in the rest of the world. But the retailer says it is committed to the continent and shareholders seem to patient too. A spokesman for shareholder Aberdeen Asset Management says he "appreciates the market's frustration", but:

"We are of the view that a more cautious approach to rolling out stores in Africa is no bad thing given our preference for capital discipline." 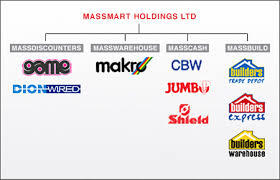 And of course Massmart is not absent entirely. Its chain Game has 172 other outlets in 11 African countries, with Nigeria and Botswana having the most stores after South Africa. Last month the first Game opened in the Kenyan capital Nairobi, which has a much smaller economy than Nigeria's Lagos, but a comparatively larger middle class, as evidenced by the below figures in a recent Financial Times article:

"While only 5 per cent of Nigeria's retail sector consists of formal shopping, rather than open-air markets and small kiosks, in Kenya the proportion is 30 per cent."

Perhaps Walmarts biggest disappointment to date has been its failure to acquire any other major retailers after the purchase of Massmart. It spectacularly failed to buy Botswana's main retailer Choppies Enterprises and nothing else has been forthcoming. Retail watchers say this might change now the Americans have entered Kenya, with local success story Nakumatt (39 big stores in Kenya and several more in the rest of East Africa) the biggest prize. Nakumat's owners have already declared that "everything is for sale".