South Africa’s economy continues to be stifled by weak growth on one side and the need for fiscal consolidation on the other. So says Deloitte in its recently published Global Economic Outlook Q1, 2017, which features a section on the South African economy titled ‘South Africa: In a tight spot’.

"A major reason behind the region's decelerating growth is the slowdown in its two largest economies: Nigeria and South Africa." 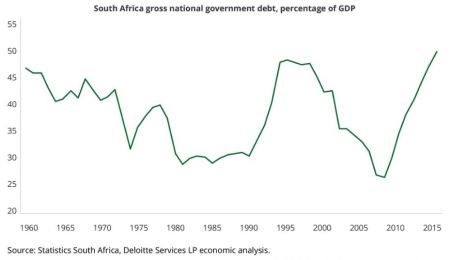 Moreover, South Africa's monetary policy might tighten in 2017 in response to US monetary tightening. A rating downgrade of South Africa's sovereign debt, though not that likely in the coming quarters due to a commitment to fiscal consolidation, will imply higher borrowing costs that will put upward pressure on domestic interest rates.

"The most prominent threat to the South African economy in 2016 was a sovereign credit rating downgrade to below investment grade, primarily due to fiscal imbalance All three major ratings agencies have pegged South Africa's sovereign credit rating at the lowest investment grade (or just above) with a negative outlook, due to structural imbalances, political instability, and weak business confidence. South Africa is likely to come under the scrutiny of the ratings agencies once again in mid-2017."