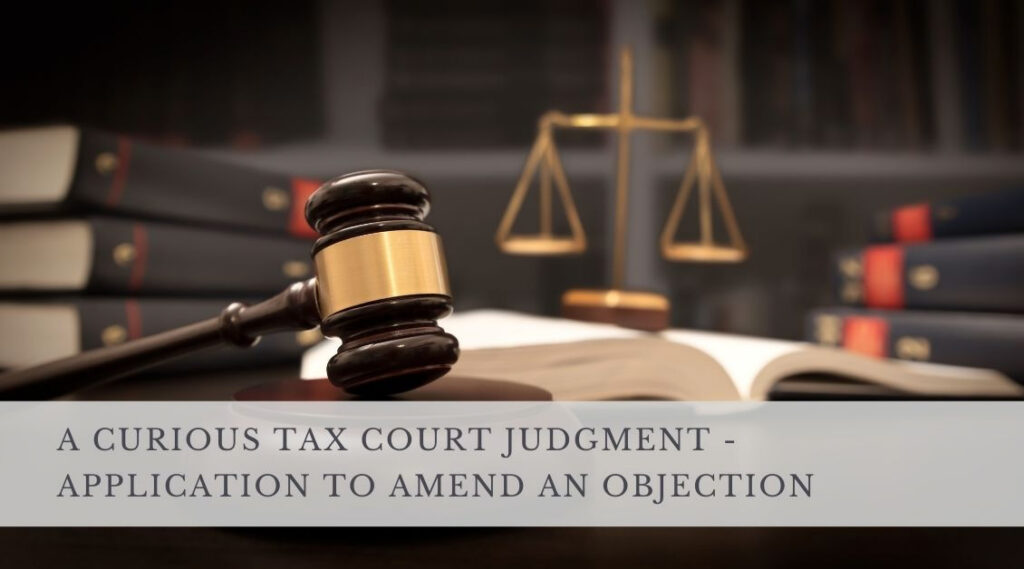 Unicus Tax explores a curious case where a taxpayer applied to amend an objection.

In a recent tax court case the taxpayer brought an application to amend an objection. Whilst the facts appear to be not fully ventilated in the judgment, it seems rather a curious scenario that leaves one with more questions than answers.

This seems rather strange for at least two reasons:
Objections are governed by very strict time periods. Taxpayers must object within 30 business days from date of assessment. Failing that, the taxpayer must ask SARS to condone the late filing of an objection, but SARS has no discretion to condone an objection submitted more than 3 years from date of assessment, and;

Assessments are final, if:

Whilst the amount of time that, in the case in question, lapsed from the date of assessment and the application to amend is not certain, it seems, from the defence raised by SARS, that more than three years have in fact lapsed. If indeed this is the case, it hardly makes sense to allow an amendment to an objection which clearly cannot be entertained on grounds of being too late. Or is the correct interpretation that the objection that went in originally was on time and that the amendment is not a new objection for which condonation should be required? Surely this can’t be. If true, it means that a taxpayer can simply submit an objection and amend same any time thereafter without having to ask for condonation in terms of the TAA? Indeed, the taxpayer would have to prove the circumstances which allow for amendment are present but surely that cannot replace the requirements that must be present for SARS to grant condonation as it would render the TAA requirements redundant?

With reference to the finality of assessments: could it not be argued that the assessment in question had become final because the taxpayer withdrew same by way of abandonment? If so, then allowing an amendment to an objection would serve no purpose as no matter how compelling such amended objection might be, the assessment to which it relates has become final and therefore the objection can never succeed? Why then allow amendment? Or perhaps an objection is only withdrawn when notice is given of withdrawal (as in the case of appeals) and the taxpayer in question presumably did not do so? If so, then indeed, SARS would have no defence on this basis of finality.

SARS also did not appear to defend the taxpayer’s application on the ground that the assessment has become final following the outcome of objection. Surely, if an outcome has been given in respect of that objection and no appeal has been filed, the assessment would undoubtedly be final, making any amendment to the objection superfluous. Perhaps the reason why SARS did not raise this is that SARS, as they often do (unless properly dealt with), simply never responded to the initial objection submitted by the taxpayer, which means the assessment could not have become final on this basis - SARS thereby being, at least partly, the author of their own fate.

Perhaps, however, the correct answer is that the time periods and finality of assessments are irrelevant to whether an amendment may be granted and that even though the taxpayer should be allowed to amend, any such amendment would be to no avail as the amended objection cannot succeed on the basis of being too late or on the basis that the assessment had become final. If this is the case, then the taxpayer, in this case, might have won the battle but will end up losing the war.

Perhaps a better strategy for the taxpayer, in this case, may have been to force SARS to make a decision on the initial objection by way of, for example, serving notice of intention to launch default judgment proceedings under rule 56 of the Tax Court rules (such decision having seemingly not been made in this case otherwise the assessment would undoubtedly have become final) and raising the new grounds on appeal, which is perfectly permissible as long as the new grounds are what we call “permissible new grounds” for appeal.

The curiousness of this case and the questions it raises may be attributed to the fact that all the facts were not fully set out in the judgment. However, we would venture to guess that this judgment will likely be relied on by taxpayers in certain circumstances and if successful, may achieve anomalous results. We can only hope that the facts and reasons for this judgment become clearer in due course.