A stark reminder that ‘living the brand’ is not only important for CEOs and marketing gurus came this week when Twitter CFO Anthony Noto accidentally tweeted sensitive information about a pending acquisition. If the CFO doesn't know how to use his own product, how should the rest of the world? It is an important lesson for CFOs in South Africa and around the globe: know your own business! A public mistake, like the Twitter gaffe, can have a major impact on your bottom line.

Even when you are not speaking on the record, executives need to be aware that they are continuously 'living on the edge'. Whether you make a statement behind closed doors or on CNN, the old adage that everything you say can be held against you remains true.

South Africa is 'living on the edge' anyway, Eskom CEO Tshediso Matona said on Tuesday. He admitted that the cause for the recent load shedding was due to logistical challenges regarding diesel. "The majority of our plants are very, very old. They need attention." More load shedding is the last thing CFO want to hear, but transparency about Eskom's challenges should be applauded.

Read our recent interview with Eskom CFO Tsholofelo Molefe about the need to focus to turn the power utility into a success.

It was great to see that a project dear to the hearts of everyone at CFO South Africa, the Partners for Possibility program, received some well-deserved attention in the national press. Under the headline 'Business bigwigs go back to school', Mail & Guardian journalist Bongani Nkosi wrote a nice article about the program that partners businesspeople with public school principals to transfer skills and improve education. The journalist also spoke to acting SARS CFO Bob Head about his amazing experiences with the program. Earlier, Bob chatted to us about the program too.

If you haven't read it yet, head over to this interview with Bob Head now. It is a must-read! 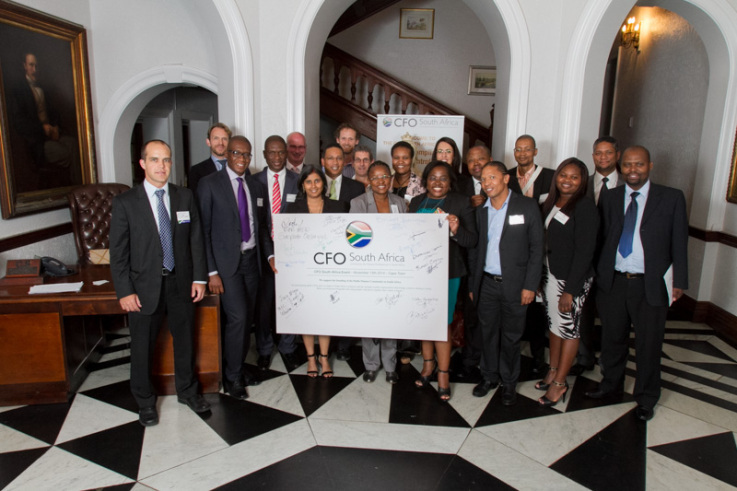 Perhaps the biggest highlight of the week was the official announcement of the establishment of the Public Finance Chapter of CFO South Africa. Cooperative Governance and Traditional Affairs Minister Pravin Gordhan has recently put great emphasis on the need for improvement among public CFOs. With that in mind, it is great to see public CFOs are keen to unite to share knowledge, network and work towards a better South Africa.

We have some great interviews in our archives with CFOs who attended the inaugural meeting of the Public Finance Chapter. For example:
Rofhiwa Irene Singo (Dep. of Mineral Resources)
Vuyo Mafata (UIF)
Callen Hodgskiss (HPCA)

Banco Santander has named former CFO Jose Antonio Alvarez as CEO to replace Javier Marin as the boss of the euro zone's biggest bank. The CFO to CEO route remains one of the greatest ambitions of finance leaders around the world, not the least in South Africa. Alvarez's appointment mirrors that of Nedbank's Mike Brown, who made a similar move. A while ago we spoke to him about the difference between the CEO an...

A lot has been said lately about executives who lie about their qualifications on their CV, from politically motivated appointments at state-owned companies to acting South African Airways CEO Nico Bezuidenhout. I am going to stick my neck out and say - who cares about qualifications? I understand that minister Gordhan is looking at minimum educational requirements for municipal CFOs, for example, but in the end all that should really matter is if the person is capable of getting the job done. So people, stop lying, prove yourself in your job and we'll forget about your qualifications altogether!

Stay connected, up to date and in the loop on what is happening in the world of finance and keep track of newly published expert insights and interviews with CFOs and CEOs. Become an online member and receive our newsletter, follow us on Twitter and join us on LinkedIn.

Share your ideas with the CFO Community as well with an interview or during one of our CFO events. Please contact Jurriën Morsch at [email protected]

The integrity commission has asked David to step down for involving the Hawks in a family dispute.

Ahmed's exposure to the inner workings of government embedded a deep sense of responsibility.

Mark says that while Tito Mboweni's speech presented plans, there weren't any guidelines as to "how".

The QCTO CFO says CFOs need to take on the role of trauma surgeons and growth navigators.