This after ANC secretary-general Ace Magashule claimed that expansion of the bank was in the pipeline.

On Tuesday, Minister of Finance Tito Mboweni responded to ANC secretary-general Ace Magashule telling the media at a briefing of the party’s NEC Lekgotla that the government plans to expand the SA Reserve Bank’s mandate.

Magashule said the Lekgotla tasked the party’s deployees with implementing the resolutions of its 2017 national conference in full.

“It was agreed that all deployees will ensure that the resolutions of the 54th national conference will be fully implemented. In this regard, the ANC NEC lekgotla agreed to expand the mandate of the South African Reserve Bank beyond price stability to include growth and employment,” Magashule said.

ANC economic transformation head Enoch Godongwana contradicted this statement, saying the ruling party had not taken a decision to expand the mandate of the SA Reserve Bank.

He added that it was the finance minister and the Reserve Bank governor who would “continue to assess our economic performance and coordinate macroeconomic policy in the interest of balance and sustainable economic growth”.

Mboweni responded to the claims on Twitter. “There is no quantitative easing thing here. The primary mandate of the SA Reserve Bank is to ‘protect the value of the currency in the interest of balanced growth and development’,” he said. 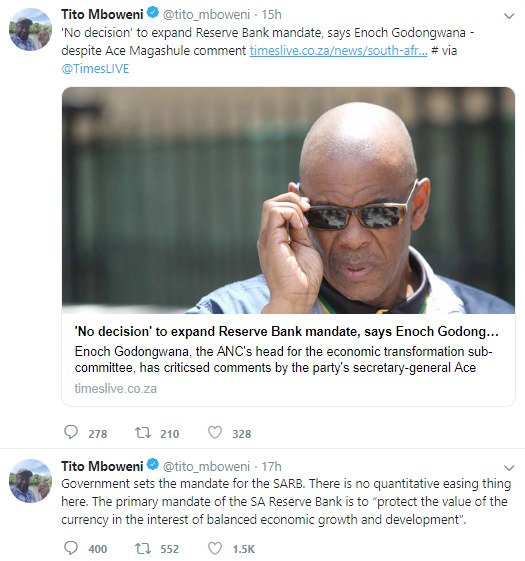