Acting CEO Jimi Matthews (pictured) has resigned from the South African Broadcasting Corporation (SABC), calling recent changes at the broadcaster “wrong” and saying that he has compromised his values under the current leadership. Matthews posted a picture of his resignation letter on Twitter yesterday morning (below). It read in part:

"For many months I have compromised the values that I hold dear under the mistaken belief that I could be more effective inside the SABC than outside, passing comment from the side-lines. In the process the prevailing, corrosive atmosphere has impacted negatively on my moral judgement and has made me complicit in many decisions which I am not proud of... What is happening at the SABC is wrong and I can no longer be a part of it." 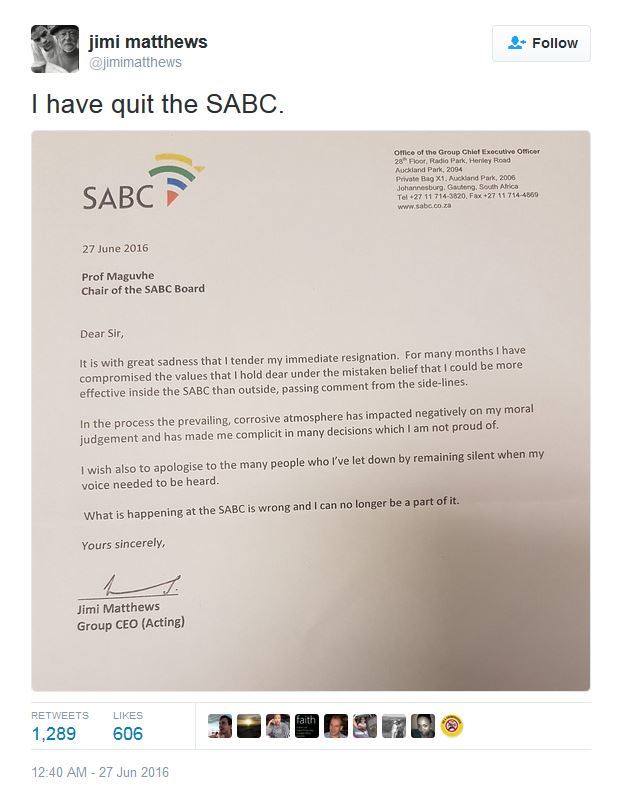 Matthews' resignation comes in the wake of changes to editorial policy at the SABC, namely COO Hlaudi Motsoeneng's decision not to broadcast footage of violent protest action; a decision which was met with much criticism from various fronts.

Matthews tendered his resignation with immediate effect, and has made no further comment on the matter as yet.