Anybody who has spent more than half a minute in the company of Victor Sekese, can testify that the CEO of SizweNtsalubaGobodo (SNG) is one of the most passionate business leaders in South Africa. On Thursday 3 October 2013 he delivered a powerful presentation on corporate growth, as part of the 5th CFO South Africa event at the Saxon Boutique Hotel in Johannesburg. He enthralled everyone with his insight, intelligence and sense of humour - leaving his audience inspired and optimistic about doing business in this country.

"Last week I received a report from Standard Bank with the title 'SA - stuck in first gear'," said Sekese at the start of his presentation. "The report was assessing the prospects of economic growth. The Bank expects overall economic growth for the South African Economy to be about 2.3 % for 2013 and is projecting 3.2% for next year." Sekese then quickly left his prepared speech alone and got personal with the CFOs in attendance: "If you tell the board you want to grow with by 3 percent next year, they will look at you funny. But that is what is predicted for 2014. That calls for creativity and innovation. How do we eat market share from others? Should we be going into other countries?" And with a big grin: "Of course, this creates opportunities for us, consultants." 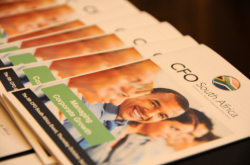 SNG is the largest black-owned and managed accounting firm in the country. It was formed in 2011 as the result of a merger between the two smaller firms SizweNtsaluba VSP and Gobodo. In his presentation Sekese spoke animatedly about the fears, the mistakes and ultimately the success of the merger. "It was very stressful, but personally fulfilling. I learnt a lot during the whole process." One the main lessons Sekese shared with the CFOs was never to underestimate the people aspect of change management, not only in relation to junior staff but right up to executive level. "We underestimated the bitterness, the hurt and the cultural differences," he said. "But we have eventually succeeded in building a new company strategy - and culture - from the ground up."

Sekese's full presentation on corporate growth and the lessons from the SNG merger can be read here.

A fascinating interview with Sekese on the role of the modern CFO in South Africa was published earlier on the CFO South Africa website and can be found here.