South African export businesses in the machinery, vehicle manufacturing and platinum industries could be heavily impacted by the British withdrawal from the European Union (Brexit). So writes Lullu Krugel*, Chief Economist at KPMG South Africa, in an exclusive analysis for CFO.co.za. South African businesses also might have to consider moving their European offices from London to elsewhere in Europe to keep access to the EU Single Market. Ireland anyone?

Brexit - the most complex "divorce" in history?

Around three quarters of Britons that were eligible, turned out to vote in the June 23 'Brexit' referendum, and decided in favour of the United Kingdom (UK) leaving the European Union (EU). In a largely unexpected outcome, a small majority of 51.9% won: the 17,410,742 'leave' votes were 1.3 million more than the "remain" votes.

Economic impacts of Brexit
The immediate reaction was one of shock: Prime Minister David Cameron resigned, effective October 2016; UK banks lost around 18% to 22% of their market value on the 23rd of June 2016, an amount similar to the South African government's total budget; the British Pound depreciated by 10%; house prices in the UK are expected to decrease and KPMG UK Economics leaders are forecasting a reduction in GDP of 3% over what it would have been, for this year and next year until matters settle down. There is also speculation that the Bank of England will cut interest rates by .25% or even .5%. 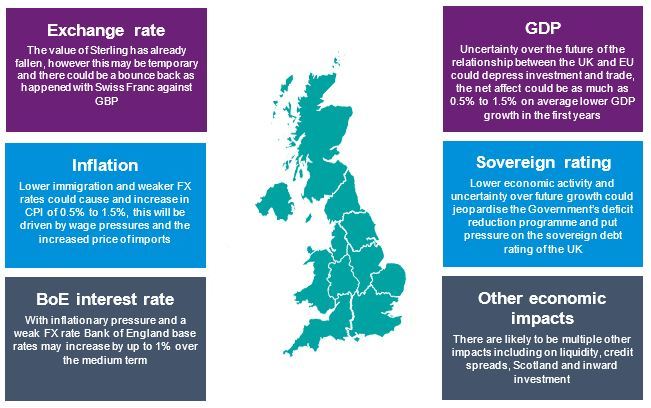 After the initial shock, markets have started to adjust and consolidate over the past few days and we are now moving from speculation to planning for what might happen next, especially regarding the impact on business. It is certain that Brexit will inhibit economic activity in the UK, in fact, there has even been talk of recession, but the lack of any similar occurrence makes it difficult to quantify this impact at present.

With the key principles of the European Union largely about freedom of movement of people, services, capital and goods, these will be the areas that would have the most significant impact on the practical business side. As it is currently very unclear what form the new relationship between the UK and the EU will take, it is important that businesses and boards put plans in place to respond to potential challenges.

The way forward
The vote is not necessarily binding on Parliament, but in the Prime Ministers Question Time in the House of Commons, the Prime Minister made it clear that Parliament should accept the decision in the referendum (so no re-run) but on all other matters, he deferred all decisions to the next Government.

The most significant questions are around timing: Article 50 of the Lisbon Treaty governs the application by a Member State to leave the Union. It provides for a two-year period in which to unwind the various agreements and provide for an orderly exit. Notably, it also prohibits any negotiations on new trade deals until the 2-year period has elapsed. However, it is up to the Member State wishing to exit to apply formally to do so, which then triggers the start of the 2 years, but it is silent on what forces them to make the application.

Therefore, the UK will remain a Member State until 2 years from the date of formal application under Article 50. David Cameron has said the making of the application should be done by his successor who will not take office until October, a move that has been described by some political commentators as a deliberate step to put the leaders of the "Leave" campaign in a very difficult position.

In addition, the Scottish National Party (SNP) has stated that it believes that Scotland must remain in the EU and has not ruled out another referendum on Scottish independence. This will likely fuel uncertainty over the future of the UK itself and whether or not Northern Ireland and Scotland would break away and remain in the EU. However, the EU is likely to apply pressure to bring that forward so as to end the uncertainty and restore stability. This week's meeting of the EU leaders must have been an interesting discussion.

*Lullu Krugel is the Chief Economist for KPMG South Africa and a director in the Financial Risk Management Business Unit of KPMG. For more information you can contact her on +27 82 708 2330 or [email protected]

KPMG is a global network of professional services firms providing Audit, Tax and Advisory services. We operate in 155 countries and have 174,000 people working in member firms around the world. The independent member firms of the KPMG network are affiliated with KPMG International Cooperative ('KPMG International'), a Swiss entity. Each KPMG firm is a legally distinct and separate entity and describes itself as such.