Abigail Brooks, Trustco: the importance of soft skills and confidence

“I needed a bigger challenge,” says Abigail Brooks, Financial Controller at Trustco Financial Services since May 2013. The Namibian firm has recently moved into South Africa and has ambitions to roll out its innovative microfinance and insurance products into the rest of the continent as well. Brooks is based in Johannesburg and will be overseeing the financial department. “What is crucial for this position is soft skills and confidence,” she says.

Brooks has had an interesting career so far. After doing articles at KPMG, she worked a year for Rand Merchant Bank and in 2008 she was offered a job as Chief Financial Officer (CFO) at Makana Investment Corporation, a small firm that assists thousands of destitute and impoverished former political prisoners and their dependants in South Africa. “I was only 28 when Makana hired me and was ready for and enthusiastic about the new challenge that was lying ahead. And with humanitarian work being one of my passions, I knew that this was an opportunity not to be missed.”

In total Brooks spent almost four and a half years at Makana, gradually growing the CFO position from an accounting role to a strategic one. “It was my chance to prove myself,” she says. “I was exposed to so many different people and products. I definitely think a young finance professional like me can learn so much more at a smaller company. I basically functioned as a general manager, reported to the audit committee and I was the face of the company when my boss was not there.”

These “soft skills and confidence” are two things Brooks says she’ll always take with her from her stint at Makana. “I am taking many lessons with me. As a financial executive it is very important that you know how to deal with people at different levels, from fellow board members to clients and staff.” After having contributed to a good cause at Makana, it is now time for the next step in Brooks’ career. “This was purely a business decision,” she says. “I am still doing humanitarian work, but only in my private capacity.”

At Trustco, our clients will not be the most experienced in dealing with insurance and finance firms, because the Namibians are targeting the new South African middle class. Monthly premiums are R139 and life benefit is maximized at R200.000. “It is therefore an affordable product,” Brooks says, hoping many previously uninsured South Africans will be able to afford legal and life cover thanks to products that have worked in Namibia in the past. “This is quite a new company in South Africa with lots of prospects,” she says enthusiastically. “I think we are speaking to a target market that has been neglected in the past by private insurers.” 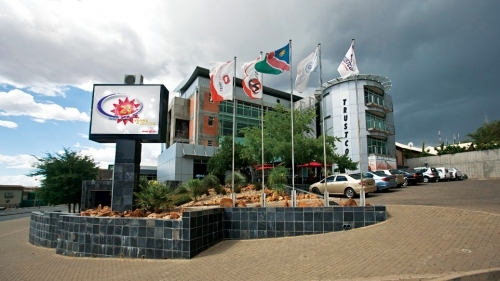 It has not only been a big change for Brooks herself; the Yambu brand also needs to find its feet in the South African market. “In Namibia the company is well established and its views are well respected. Here in South Africa Trustco does not have a big influence yet,” Brooks observes. Nevertheless, big plans are afoot to roll out the Namibian formula into the rest of Africa. “That is one of the reasons that we came here,” says Brooks. “I am keen to learn more about doing business on the rest of the African continent. Africa is a goldmine. If we don’t do it – an African based company offering solutions to the African continent – some foreign company will offer our solutions.”