Barry Curtin's notes from the deep end at Didata

Six years down the line, Barry reflects on his first challenging year as Didata's CFO.

Barry Curtin was appointed as Dimension Data’s CFO without ever having worked in the finance department, and with little time to settle into the role. This is the story of how he felt he was sinking, then swam to success.

Barry spent much of his first 12 months as CFO trying to come to grips with a complex portfolio and ever-changing internal environment while the industry was going through dramatic transformation. He was young, untested, and facing organisational challenges; but the talent and grit that his predecessors had seen in him carried him through. He’s now been six years in the role, and reports that his professional – and personal – life is running much more smoothly!

Barry had completed his articles at KPMG but found auditing unfulfilling. He headed to London and spent three years working at various banks, including Goldman Sachs, in roles with a focus on management accounting, financial planning and analysis. He then took five months off to travel through parts of South East Asia, Africa and the Far East.

“Those travels were a very introspective time for me. I wasn’t sure what I wanted to do in my career, but I had a sense that I wanted to live in South Africa. I was at a career crossroads, feeling a little underwhelmed by financial services. So, after my travels, I started marketing myself to come back to South Africa, but every single job opportunity presented to me was banking-related.”

He argued with the recruitment agents who were putting him forward for these roles, however, their response was that they couldn’t market him for something he hadn’t done before. Frustrated, Barry returned to South Africa, despite not having a concrete offer and opportunity on the table. Then, fate intervened. 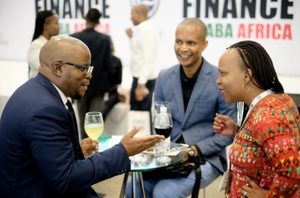 Finance professionals can register for FREE for Africa's biggest finance conference and expo. 5,000 attendees, 120 speakers and more than 75 exhibitors at the Sandton Convention Centre.

A chance meeting
“I bumped into a friend at a wedding. He said to me that if I didn’t consider a role at Dimension Data, I could consider our friendship over! I wasn’t sure about a career in the IT industry but was open to discussing it further. I’d always admired Dimension Data from a distance, but when I went in for a discussion, and saw that all the buildings were named after sporting venues – and I am passionate about sports – I thought, ‘This is a fit!’”

Barry met with the then-CFO, Sean Joubert, and was offered a role in the finance department. He proposed to rather take on a commercial role instead and joined Dimension Data in commercial finance, where he worked for three and a half years under the mentorship of a good friend, John King.

Sean later became the MD of the company, and one day in 2012 at 7am, Barry received a phone call from him. “I thought I’d done something wrong. He never phoned me!”

Sean asked Barry to meet with him, and when Barry came in, asked the question that would change the course of Barry’s life: “Would you like to apply to be the CFO of Dimension Data?”

Barry was understandably surprised at this out-of-the-blue offer. “It was an intimidating proposition – I hadn’t come through finance, hadn’t been in the company that long, didn’t know the reporting systems or processes, and didn’t know the finance team very well,” he says.

But Sean presented a compelling argument. “We don’t want a grey-haired, scars-on-his-back, experienced guy. I am that guy. I’ve done it for 10 years. We want someone who’s worked in the business and been in the market in front of clients, negotiating and working on deals.”

“He wanted someone young to challenge the status quo, to take a fresh look at the portfolio. He wanted someone in touch with the business, who had a strong relationship with the sales teams and general managers. And I had built up quite good credibility, having been involved in some of the biggest commercial deals that Didata had done at the time across some of the businesses.”

After a thorough vetting process, Barry was offered and accepted the role. Six months in, a senior colleague and friend, popped in to check up on him late one evening. “I had spreadsheets everywhere,” recalls Barry. “He looked at me and said, ‘Are you OK?’ And I said, ‘No, I am actually trying to see how I can exit this role gracefully without disappointing anyone!’ And he responded, ‘Absolutely no ways are you going to resign. I won’t allow it!’”

A period of change
While Barry is candid about having felt overwhelmed as he earned his stripes, he says that those first 12 months were particularly challenging because Dimension Data was going through a period of significant change internally, with an industry grappling with new technologies, the rise of cloud computing and different ways in which clients wanted to consume IT Services.

“Within the first year I had to deal with a large restructure resulting in retrenchments. We also had to implement and execute on a new global strategy while reviewing our overall geographic presence and business model across the Africa and Middle East operations. But most importantly, I had to earn the trust and respect from the broader Dimension Data finance community, win over a senior and experienced executive team while managing various tough and demanding stakeholders, both internally and externally.”

At the end of that first year, Barry’s father-in-law recommended that he write down everything he had learnt throughout that year. “So I did, and it was amazing to see how far I’d come in the role and how much I had covered in terms of scope and experience.”

This list-making process has now become part of Barry’s personal tradition, and every year, he does the same exercise. “The learning curve will never again be as steep as it was in those first 12 months, but it’s a valuable measure of ongoing professional growth and development.”

“Now, six years down the line, I’m much better in terms of managing my workload and I am more equipped for what the role entails. The business is a lot more stable now that we’ve done the tough things.”

In his time as CFO, Barry lists his achievements as the creation of a finance shared service centre, roll out of a new Global ERP template, rationalisation of the business portfolio through the sale and wind down of underperforming regions and businesses, and the successful investment and implementation of Robotics, Business Process Automation, and reporting dashboards.

“Critically, I believe I have surrounded myself with a very capable and talented team that is aligned on what we are executing on and have a strong affinity for the company they work for – that’s how you create real shareholder value!”

The business has changed markedly over the years with acquisitions successfully integrated, rebranded and performing well. And there has been a significant turnaround in profitability across all of Dimension Data’s business units.

Strategy and succession
Barry has also invested and focussed on a succession plan.

“There are three to five candidates in this group who have progressed through the business and who could, in time, step into my role and it would be seamless. I am a strong believer in promoting from within.”

Barry says he remains very committed to Dimension Data’s current strategy, which will be measured at the end of 2020, at which time he would have been in the role for eight years. He believes it will be a good time to reassess his career options and ambitions as he is conscious not to stagnate in the role, and that fresh thinking and new blood may be good for the company.

“At some point, it will be time for someone else to do this role. With Dimension Data now being a significant global company with a presence in over 51 countries around the world, along with recent exciting announcements and developments with NTT, the parent company, I believe there will be opportunities within the group that will challenge me and enhance my professional development.”

Sports: bringing people together
Barry plays touch rugby on Mondays, goes to a “cross-fit type” gym on Tuesdays and Thursdays, plays tennis on Wednesdays and plays golf on some weekends. He also plays cricket four or five times a year and ran the Comrades and 2Oceans Marathon last year.

“I am very active and interested in and exposed to a lot of sports,” he says. “If you went into my Twitter profile, you’ll quickly see that I follow a lot of sports journalists and that sport is a passion of mine.”

If he was ever to consider an industry change and a move away from IT, he indicates that he may be interested in exploring opportunities in the sport and wellness industry. Dimension Data, however, does have a rich heritage and association with sport.

“Because of our history and love of sport, we’re now developing various technology solutions to enhance the viewing experience, exposure and enjoyment across various sporting codes and events, most notably the Tour De France cycling race.”

He says that he believes that sport is one of two things that breaks down barriers between people (the other is music). “Irrespective of nationality, gender, age, background or colour, when building relationships with clients, colleagues and suppliers, I believe a love and appreciation of sport brings people closer together.”