CFO of the Week: Bob Head, Acting CFO at SARS: improving schools by influencing without power

Head is one of the flag bearers of Partners for Possibility, a project that ties business leaders to school principals in struggling schools. As he prints out a PowerPoint presentation to make sure he doesn’t forget to list any of the benefits of the program, he tells us about his own bond with Jane Tsharane, the formidable principal of Makgatho Primary in Atteridgeville. “It is a state school in the informal settlement side of the township,” Head explains. “The school was non-performing, but the pupils are the smartest things.”

Everybody likes a success story and it is a delight to listen to Head chat about the turnaround of the school, which is now a well-performing education facility. “Education is in crisis,” says Head. “The schools are beleaguered and the poor old principals are on their own. Often all I do is listen and Jane gets to solution herself. It is not that business hasn’t done anything for education in the past, but throwing money at the problem doesn’t help. Schools need people and capacity. I am a foot soldier of Partners for Possibility and try to help that way.”

To get an idea of who Bob Head is, we scroll through his CV, as he elaborates on the highlights. Having been raised in an “anti-apartheid family” in England, it was never a surprise that the Oxford-educated CA would eventually spend a great deal of his career in South Africa. In the UK he founded the first internet bank in the country – egg.com – and was the first Chief Executive of cooperative bank Smile. “That was the biggest joy in my life,” says Head.

From 2003 Head occupied various powerful positions at Old Mutual, ranging from Corporate Development Director and HR and Strategy Director to Group Director southern Africa and Wealth Management CEO. “My time at Old Mutual included a 6 month secondment in 2004 “to help sort out a very broken and dying Nedbank as CFO”. In March 2012 Head joined SARS as special advisor “to go after the big bad guys” and since December 2013 he has been acting Finance Director. “Of course that is much less fun but I have surprised myself by enjoying what we need to do,” he mischievously tells us. “My contract runs until February, but they want me to sign for another year. I am thinking about that at the moment. I’ll eventually go back to the UK, but I want to stay in touch with South Africa through some non-executive roles if I can.”

Head says he enjoys “making a difference in South Africa” and that one of his goals is to contribute to a “lite government” where more is done with less and bureaucracy is reduced. He is amused that Finance ministers in South Africa from Chris Liebenberg onwards call him “Bob” because he has never even seen a UK finance minister. He has in the past been involved in drawing up the Dinokeng Scenarios, which chart several ways the South African economy can develop – a document that has perhaps greatly influenced the current National Development Plan (DNP), says Head. “I like music, people and using my brain,” he adds unprompted – probably to explain why his iPod was blaring as we entered his office.

South Africa has a special place in Head’s heart, he confirms. “The amount of crime is awful, but I am always amazed by the phenomenal decency of ordinary people in society. Democracy has been around for 20 years and people are very patient. Much has been done but there is so much to do. There are many problems like crime, health, corruption, poverty and unemployment, but there is only one thing that can fix all of them and that is education.”

That brings Head back to Partners for Possibility, which currently has 200 managers paired with principals. “There are 24,000 underperforming schools and the managers don’t have to be at senior to be able to contribute,” says Head. “The project has gone viral within Nedbank, where many have signed up. Yes, for companies this can be part of their Corporate Social Responsibility program, but it is also management development – so there is a synergy. As partner to a principal, all you have is influence, not power.”

Head believes CFOs have a lot to contribute to schools. “School principals have a bunch of stakeholders, so stakeholder management is a big thing. A CFO will understand this. There is a fundamental need to get buy in and use EQ to succeed. That is where we can help.”

Head’s English mother has contributed 6,000 books to the school’s library; he has devised money raising schemes and has taken staff on a picnic at the nearby Orient Hotel. “We have an incentive scheme. I will send the three best contributors to the school to that hotel for the night and probably the best meal in South Africa – it is gorgeous. And if the school improves their score by 20 then all the staff will be going. The more you put in, the more you get back. Parents don’t understand how they can influence education. A friend is a pilot and we did a raffle for parents to fly over their own houses. It doubled the attendance of parents at meetings from 35 to 70 percent and we made the parents sign pledges to get involved in their kids’ education. And about a dozen got to fly for the first time and they saw their homes, the school and Atteridgeville.” 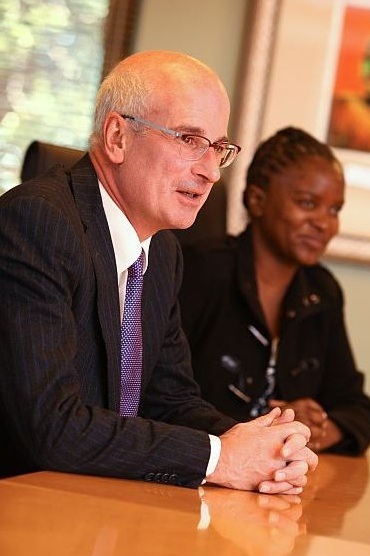 Such spectacular gestures are not necessary to make a success out of Partners for Possibility, Head emphasizes, although he enjoys making them. Head says the program has exposed him to completely new things, beliefs around witchcraft and the ways the people in Atteridgeville are trying to make ends meet. “The biggest shock to me was how rewarding it was. I thought it would be more of a chore. It is not, it is a joy. The school has gone from non-performing to performing and that is mostly thanks to the principal and the staff, not to me. She is a single mother who adopted another child out of duty. She also founded a hospice for abused children and is really a leading figure in the township. You cannot want but to help her. And the staff has a passion. ”

Head calls on other CFOs and other managers to spend some of their time helping a school. “A lot of people say ‘that’s fantastic, but I don’t have the time’. That is wrong. You have time. It is just not high enough on your priority list to claim a few hours of the 168 there are in a week. Make the time and give something up. I don’t play golf, for example. Everybody should contribute to their country or in my case someone else’s country and Partners for Possibility is a great way to do this.”

The views expressed here are those of Bob Head in his personal capacity.

Lessons from a CFO on successfully scaling a start-up