With the CFO Awards having been scheduled for 14 May before the Covid-19 crisis, CFO South Africa hosted an awards-themed Community Conversation on the night to celebrate those who have been nominated for this year’s awards. Sponsored by Workday, the CFO Community Conversations have been serving as a safe space for CFOs and FDs to come together weekly on an online platform to share ideas, frustrations and challenges that have been brought upon by the Covid-19.

On Thursday, the focus shifted away from the gloom and doom surrounding the national lockdown, to a light-hearted celebration of world-class excellence in the finance profession.

CFO Enterprises MD Joël Roerig kicked off the ceremony by thanking the partners involved with the CFO Awards – Deloitte, SAP Concur, Clarkhouse Human Capital, Coupa, Jaguar Land Rover’s (JLRSA), Workday, and Standard Bank – before providing a brief history of the awards. He then played a short video showcasing all the CFOs that had been nominated namely:

“The panel of judges is diverse, which makes it an exciting process because it means there are different perspectives from which one can learn. It’s challenging but also personally fulfilling, not the least of which is due to the calibre of candidates that are nominated to partake in the awards. Generally, when you speak to the candidates, almost all of them are personally committed to developing talent,” said Victor, referring to an image of 2018 CFO of the Year Christine Ramon alongside Meroonisha Kerber when she scooped the honours. Meroonisha was Christine’s second-in-command at the time and went on to become the CFO at Impala Platinum shortly thereafter.

“So watching that kind of growth within the finance profession...it gives me a great sense of pride and fulfilment to have played the role I have in this community.”

Claire Janisch from Biomimicry South Africa then delivered a riveting presentation about biomimicry, which can be loosely defined as the design of solutions, systems, and new technologies as inspired by nature.

“We need to move away from thinking about organisations as siloes to thinking of them as large organisms that mimic eco-systems in nature so that they can grow and thrive organically,” said Claire. “Ants, for example, have been around for millions of years and have a capacity for resilience that we simply do not have as humans, and we need to learn that ability to adapt.”

By way of an example, she referred to the work of Master’s graduate Tharalelo Mokgokong, who redesigned the South African Post Office’s delivery system by emulating ant colonies.

She said the Waze app was similar in the way it applied biomimicry, leveraging the millions of input points of users.

Waze recommends the best route for drivers to navigate traffic in crowded cities. Waze engineers studied how ants automatically calculate the best routes, through a phenomenon called stigmergy. They deposit a fine drop of pheromone on the ground whenever they emerge from an anthill, creating a highly scented path, which is also the most efficient, for other ants to follow.

Attendees thereafter went into breakout rooms to reflect on Claire’s presentation and ideas around how best to implement some of the principles that she had spoken about in their organisations.

University of Cape Town executive finance director Ashley Francis said he had always had a fascination with ants.

“Funny enough, we have had a massive infestation since the beginning of the lockdown. In trying to solve this mini-invasion, I have even been monitoring the movements of the ants that are seemingly invading home... so I found Claire’s presentation particularly interesting. And the message received from Claire is that we must stop being stubborn as human beings and learn from the nature that surrounds us.”

Elisa Mkhize, who is the CFO at Clinix Group, loved the learnings around the concept of a decentralised network, reflecting particularly on what Claire had said about South Africa’s over-reliance on Eskom and how a better-distributed network “in which we could leverage mother nature for renewable energy, is low-hanging fruit to enable us to become more resilient as a society and move from being so beholden to a single power source.”

For JLRSA regional business manager Palesa Mabusa, Claire’s presentation on ant colony optimisation made her think about the power collaboration and how our success, or lack thereof, in these times, will depend so much on our ability to work together, not only within our organisations but as a business community.”

The biggest lesson that they had learned during the Covid-19 lockdown was prioritisation.  Even though it is something that they have always done, the national lockdown has driven JLRSA to be more strict, especially when it comes to budget revisions and cuts. 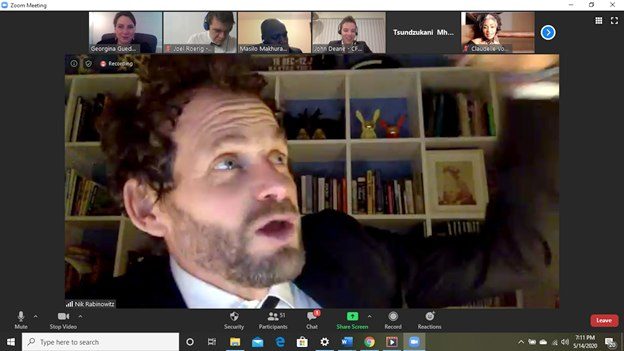 At the end of the evening, comedian Nik Rabinowitz wrapped up the discussion. He had been listening in on the discussion with the intention of summarising the highlights in his signature comedic style.

“What I’ve picked up from the discussion is that it seems CFOs come together every week on this forum to tell each other to unmute themselves,” said Nik in the side-splitting address.

“One of the CFOs spoke about how difficult it is was to nurture relationships during this period and I agree but it is extremely difficult, because eye contact is a key part of earnest communication and, the only way to make you feel like I’m looking at eye your eyes, is to look closely and directly into the camera on my phone. It’s like doing a comedy show at an old age home,” he joked.

He then poked fun at some of the CFO awards nominees, asking Curro FD Bernardt Van der Linde to please organise him a headmaster post at one of their schools since he wouldn’t be able to perform stand-up comedy for the foreseeable future.

“Ashley, I actually attended UCT many years ago and I didn’t know they had CFOs there. But since I have you here, I’d like to ask...I studied business science at UCT, and have since not applied a single thing that I learned – so can I get a refund?" he said.

Lastly, on the subject of the lockdown, Nick said he had heard a lot of people talking about former Nelson Mandela who had been in lockdown for 27 years, which is supposedly reason enough for South Africans to be able to cope for as long as is necessary.

“The difference between that and what we are going through is that Mandela didn’t have a spouse and four children running wild in his prison cell.”

Many a laugh later, the Community Conversation came to a close. It was not quite the gala evening that was meant to take place but it was indeed an insightful night filled with comedy relief and riveting conversation about the times and situations South Africans find themselves in.

The CFO Awards ceremony is now scheduled to take place on 25 November.