Jason Wright, CFO of Cape Union Mart, took an unusual route to get where he is today. Having finished matric, Jason went into gainful employment in the IT space before going on to study information systems, also gaining experience in web development and project management. It was only in his mid-twenties that the commerce bug really bit.

“Through that journey [in business and IT], I decided that a business qualification was going to be better for me. It was more closely aligned with my goals. So, I converted that degree into a BCompt at Unisa where I studied through correspondence. I finished my articles at KPMG, and kind of started at the bottom again.”

From there, Jason headed to McDonald’s. “I looked at a number of opportunities when I was finishing up my articles. I interviewed with a travel company, for example. McDonald’s just seemed, at the time, to be the most interesting.” Jason’s intuition proved right, he says. He gained valuable insight into franchising, and both local and international business at the fast food giant – as the Shanduka Group became the developmental licensee (DL) for McDonald’s South Africa. “I was then approached by Massmart to come join them within the finance team at Builders Warehouse. It was a more commercial role, more operationally focused than my McDonald's experience. I worked on some very interesting projects there and I learnt a lot. As it is part of the Walmart group, I was fortunate enough to travel to the US and Canada, as well as the UK, so I got exposure to those markets as well.”

Cape Town lifestyle
It was around this time that Jason and his wife had begun to think about the lifestyle they wanted, and saw a move to Cape Town as one means of achieving this. Fortuitously, Jason met Cape Union Mart CEO Andre Labuschaigne, who presented the opportunity to step into a more senior role, move to Cape Town, and join an established South African retail brand with over 80 years presence in the market.

Working in retail was an appropriate ‘coming home’ for him too, he says. “I had actually worked as a casual in Totalsports back in the day. I never imagined back then that I would land up back in retail almost 20 years later.”

Retail is different from other traditional businesses, he says. “There is a lot going on. We have about 222 stores now, and that creates a lot of variety in the business. There is always something new coming out, and we have a number of chains, including Old Khaki and Poetry, Tread+Miller, as well as our own brands like K-Way. We also have an online element to the business, with all four chains online. We manufacture some of our own products through K-Way. Plus, there is the import side. So, it's an interesting business, and very dynamic.”

Online sales
Jason welcomes the complexity this creates, saying he likes to keep his mind occupied. “I always want to keep things interesting.” The online sales aspect is just one of those challenges. At Cape Union Mart, both the financial and IT (including web) mandates fall under the responsibility of the CFO.

“You do often find IT reporting to the CFO or finance, but it does bring its challenges. You have a split focus. Instead of just looking at the numbers and the strategy with the CEO, you have to manage two functional departments to make sure they are running and operating effectively.”

Thankfully, it is a split that is well suited to Jason’s particular skill set and professional background. He also sings the praises of his team, including solid IT and finance managers and senior teams. “We also have a treasurer to make sure that we are covered in terms of any currency risk or exposure.”

Data-driven growth
Collection and analysis of data – from both online and real-world sales – is a key benefit that Jason and the team seek to make the most of. “We obviously generate a lot of data at point-of-sale. We can analyse profitability down to the product or SKU level. This is also done on merchandising, and on a per store or per region basis as necessary. We can look at turnover on a daily basis.” These reports consolidate daily by store or chain, and feed into the Finance team, among other end-points. It is then used for the modelling of potential new sites.

Ours is not a cookie cutter model. We examine every site on its merits. We have a committee for that, in which finance plays a big role.”

It is all part of an ambitious growth plan that will also require growth in Jason’s team. “We are constantly looking at the capacity of the team and making sure that we have the right skills, so that they are able to support business. What you don't want is an administrative brake on growth. You always have to balance new staff and systems with the pace of growth.”

Burgeoning web presence
Although the group’s physical store sales still outperform online sales, it is a growing segment, and their web portal has to be able to support both serious online shoppers, and the “info gathering” browsers who search online but ultimately buy in store. “Initially, people didn’t expect a lot from their retail websites, but it is really starting to take off now. It is performing well,” Jason explains. “I think it really serves a customer need. Customers are more and more moving to online, even as a research destination. 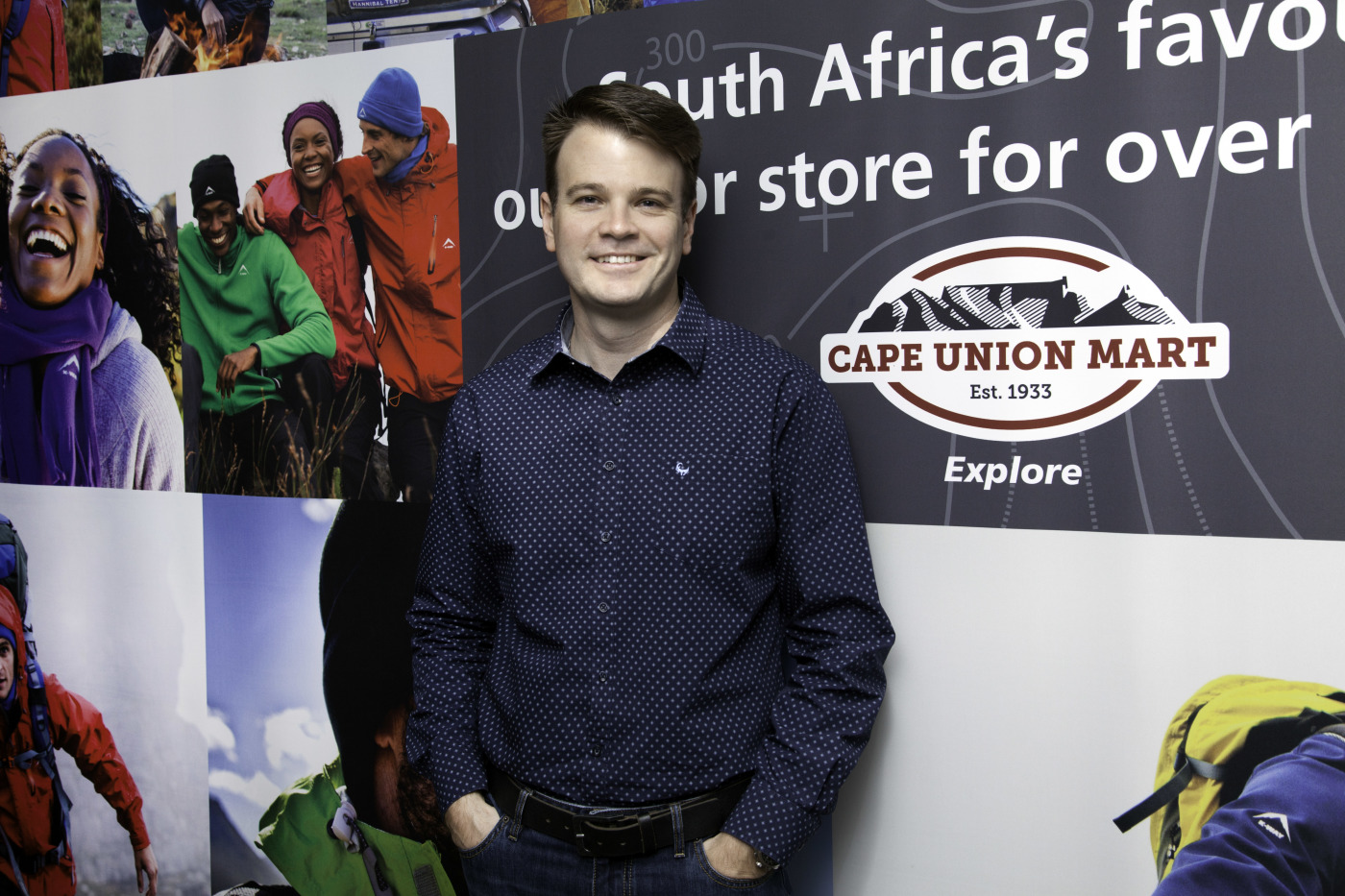 Typically, if you are looking for a product, you start online. Also, if you are looking for stock and you want to know which store to go to, you go to the internet. We are definitely seeing massive growth in that space. It's becoming more and more of a focus area. It is still small. I think any retailer will tell you that, as a proportion of total turnover, it is still small, but definitely something we are giving attention to right now.”

To support this, Jason and his team have also had to implement an increasingly diverse number of payment options – for both online and physical stores. Beyond the cash, credit and debit cards, they’ve adopted a store card (underwritten by RCS), eBucks, Discovery Miles, digital vouchers, Gateway-based online payment, and even in-store app-based payments like SnapScan.

“As a retailer, these are the kinds of things that we need to be mindful of. We must always look to the future, to see where retail is going. We need to invest at the right time so we are not left behind. And also not too early, so that we are there too far ahead of the customers.”

Cape Union Mart has an increasingly connected shopper base, who are comfortable making purchases online and even via app or mobile browser. Retailers who are not adapting to this new customer, will find themselves in hot water in the future, Jason warns.

Hot Water
“Mobile transactions in South Africa are topping around R19 billion. Even if you exclude airline tickets and that kind of thing, people are becoming more and more comfortable purchasing online. In terms of the digital participation curve, people have a good experience online and they tell their friends and that builds confidence.”

But even with this growth in confidence about online buying, Jason believes the Cape Union Mart brand heritage is one of the biggest advantages they have. “We are already a trusted brand, so the propensity to buy from us is a little bit stronger than if you have never heard of the brand before or they are an online only brand.”

Keeping honest
Social media is another driver of this growth. “For a lot of South Africans, the world is becoming a lot smaller. People can see what is going on in more developed markets. Most people are aware of Amazon, even if they haven’t used it, and they want that experience as well,” says Jason.

Local customers now have reasonable expectations of a smooth, seamless, safe online buying experience, with the real-world parcel delivery fulfilment to match and close the loop. The cost of fulfilment is still a major consideration, and is one last place where Jason believes established physical chains still have the advantage on their online competitors.

“As a small online retailer competing with us, or against groups like Foschini or Massmart with their efficiencies of scale, it is an uphill battle.”

“On the other hand, online retailers are keeping everyone honest, often revealing the true cost of a product without physical stores and staff factored in. So, retailers are watching the online space, and they’re watching us. At the moment, the biggest threat to a retailer is still other retailers. But it is the customer who wins in this competitive space.”