At the CFO Awards on 15 May 2019, Umar Banda walked away with the Young CFO of the Year Award, in recognition of the exceptional work he's doing at the City of Tshwane. He has addressed the City's illiquid position by finding innovative ways for the city to generate income, and he is excited about the establishment of a CA programme, which will bring much-needed skills to the field of public finance.

Georgina Guedes asked this trailblazing CFO some questions about his vision for the City of Tshwane.

1. How did you end up in the role of CFO at the City of Tshwane?
I completed matric at Zinniaville Secondary School in Rustenburg. In Standard 9, I wasn’t sure what to do after school, but then we had a career day, and I was intrigued by the accounting profession. I was quite good at accounting and maths, so I thought, let me try this thing. I went to the University of Pretoria and obtained a BCom degree in Accounting Sciences, and an honours degree as well. Then I joined KPMG in Hatfield as an junior accountant, and eventually I qualified as a CA in 2008.

I left KPMG in June 2012 to join the office of the Auditor-General, but after a couple of months, the opportunity came up to join the City of Tshwane as head of financial reporting and assets, and I was appointed in 2013. After about two years, they asked me to act as CFO, and from then on, doors started opening, and I was officially appointed in the position in 2017.

2. What in your mind makes a great public sector CFO?
For a number of years, the public sector has been plagued with controversies, when it comes to compliance with legislation, so I think the thing that comes to mind first is ethical leadership. People need an exemplary figure that they can follow, so that they can be the public servants that we need them to be in this city of ours.

3. In your acceptance speech for the Young CFO of the Year Award, you spoke about the importance of empowering the youth. Could you share with us why you believe this is important?
I have always believed in investing in young people, so one of my endeavours has been to appoint a lot of young people to bring new ideas into the system and to make sure that, as and when people are ready for retirement, we are able to continue as a city. In this ever-changing world, we need to be ready with new ideas for how to take this city forward.

I believe that this is important because if you look at the unemployment statistics, especially in Tshwane, which is the most youthful city in the country, the unemployed are mostly the young. If we don’t do anything to change that trajectory, we are going to have a problem as a city and as a country. If you look at the number of service delivery protests and work stoppages, they mostly involve young people who are looking for opportunities. If we don’t create those opportunities, the situation will become a problem for the city and the people we serve.

4. You have introduced a CA programme at the City of Tshwane. Please tell us more about it.
When I was still in high school, one of the most amazing things that happened was that I met a gentleman who was willing to provide financial support throughout my high school years, and because I had reasonably good marks in matric, I was offered a scholarship to university. Then, when I was at KPMG, my manager was a person who was really willing to make a contribution to changing someone else’s life. In this profession, one of the things we are always encouraged to do is to mentor the people who come after us.

For eight years, I got accustomed to that. So, when I left the Auditor-General, it became my passion to introduce something similar at the City of Tshwane. I appointed two CAs a couple of years ago. After six months, they left because they weren’t used to the environment. There is a shortage of young, black CAs in the country, and we need financial management skills in the field of local government. Without the training, it becomes very difficult to thrive in the environment. So Group Financial Services has created a CA training programme to allow young graduates the opportunity to become CAs. The City provides the training in partnership with Saica. We will produce CAs who are accustomed to the public sector environment, and they can continue beyond their training here or they can provide services to the public sector at large. My dream is to have a couple of them signed off in the next five years.

5. What is your vision for the future of the City of Tshwane?
Financial resilience. I want clean audits and clean governance for the City. The environment is conducive, we have the right people and, with the CA programme, we are well on our way to contributing to the capital city we all want to see.

6. What are you proudest of in your time as CFO?
I am proudest of the efforts we’re making towards youth empowerment. Outside of the CA training programme, we’ve been hiring young people with at least Grade 12, preferably with mathematics, and given those young people jobs, such as calling our customers daily to remind them to pay accounts or going out to assist with meter readings. Giving opportunities to people that don’t have hope for tomorrow is extremely fulfilling.

I am also proud that the City of Tshwane was upgraded two notches by Moody’s last year – something that hasn’t happened in seven years. This is really a demonstration of the kind of work we are putting in as a team. Our finances are resilient, and we can continue to support the vision of the City going forward and make sure that we are able to deliver services. 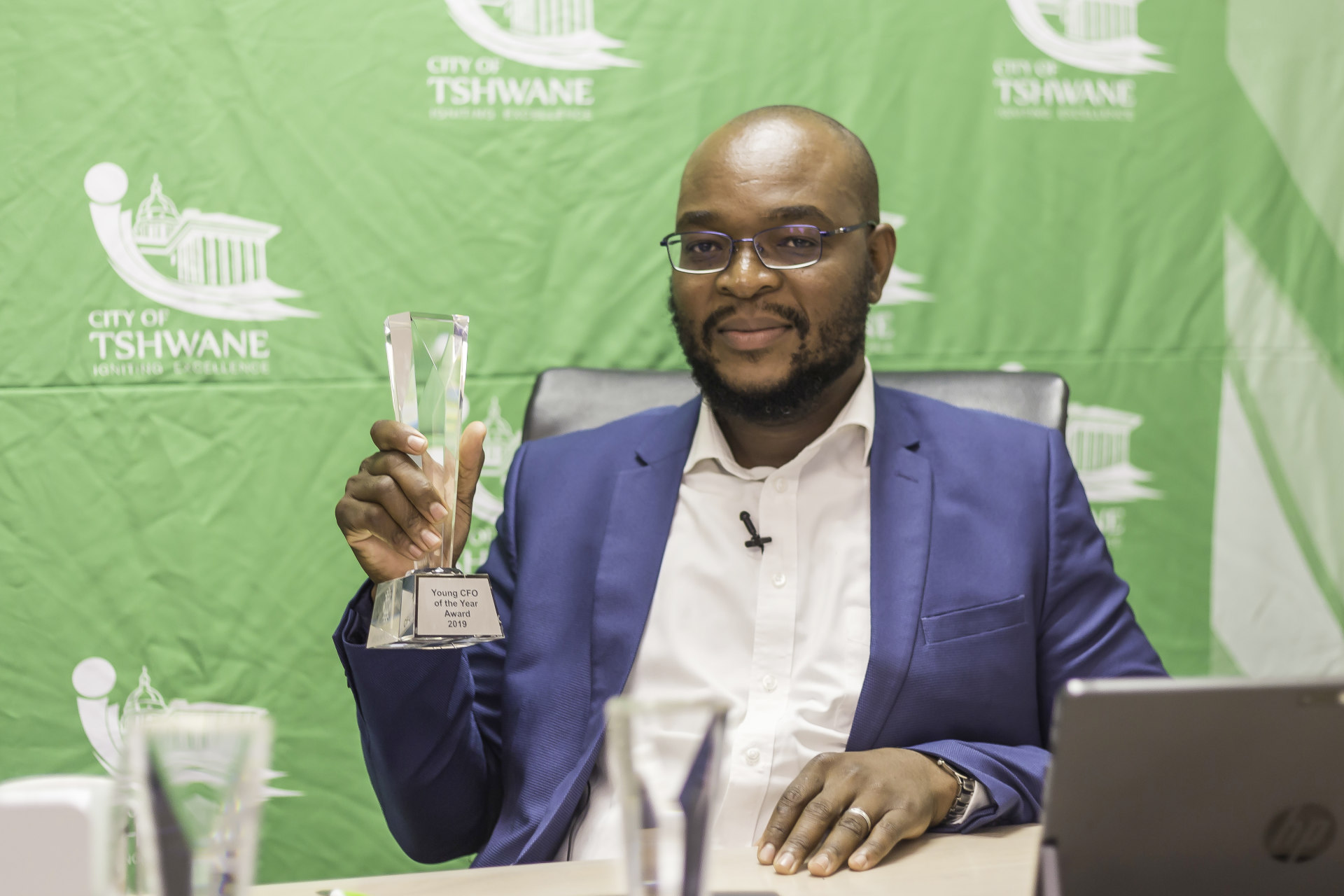 7. You’ve achieved great cost-savings and efficiencies at the City of Tshwane. Tell us some of the measures you adopted.
When I was appointed, we were in a technically illiquid position, so I had to introduce a financial recovery plan.

We looked at a few areas. We engaged with customers to make them aware of their obligation to pay their municipal accounts, which has seen about a three quarters of a percent increase over the past year, which amounts to quite a lot if you consider the number of customers we have.

We also have the Wonderboom Airport that we’re not taking advantage of. If you fly over OR Tambo’s airspace, you pay a fee, but if you fly over ours, you pay nothing. We have a national licence, so we’re looking at commercialising the airport. If any airlines want to come to us, we’re just about ready.

And then, in a city of this size – it’s a city of 6,000 km2, the largest in the country – we have a number of properties, so we’re looking at options to lease them at market-related rates or to get rid of them.

So my focus is on concentrating on what we can do on the commercial side to increase our earnings, because increasing tariffs is getting too expensive.

8. This was your third nomination for the CFO Awards. How did you find the process?
It was quite daunting. This year was a particularly difficult one. One of the things we struggle to do as people is to share the things we’ve done well. You can quickly forget the little things you’ve done that have made a big difference in the working environment. This year, I looked at very high-level things, recollecting what had happened over the last 12 months.

When my name was announced as the Young CFO of the Year, I thought I hadn’t heard properly. I had to make sure that they had actually said my name. It’s a feeling that is quite difficult to explain.

9. What do you do to relax?
Being halfway through my first five years as CFO, as you can imagine, the environment is quite strenuous and stressful. I take a lot of time to enjoy nature. I really enjoy fishing – not that I know how to. I’ve only caught three or four in the last few years. But it’s one of the ways I am able to relax. On the weekend, I do gardening, which relaxes me quite a bit – it’s a different environment to being in the office. And I love going home to visit my family in the village, where there’s total serenity. That’s how I relax.