All attending guests received a free CFO Magazine, which includes an overview of CFO South Africa's 2017 events and the much-anticipated Finance Indaba Africa. 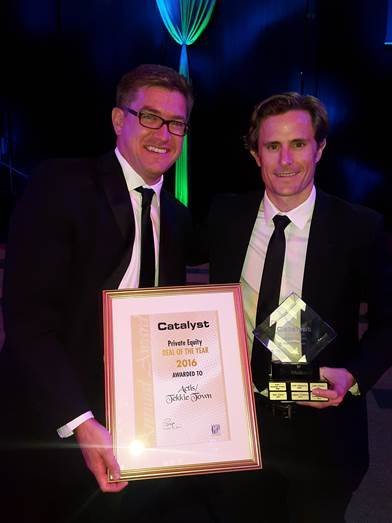 Charl stole the spotlights when his company's acquisition of Stillwater Mining was celebrated with nothing less than the Deal of the Year Award. The Private Equity Deal of the Year went to the Actis (bottom photo) disposal of footwear giant Tekkie Town to Steinhoff, a deal that yielded the Individual DealMaker of the Year award for Piet Ferreira (former Steinhoff).

"DealMakers is an important barometer of South Africa's M&A and corporate finance market and we are honoured to be have been recognised at this year's awards," said Christo Els, Senior Partner at Webber Wentzel and long-standing member of the panel of judges of the annual CFO Awards.

"The fact that our firm is consistently recognised for its deal expertise is further reassurance to our clients that their high-profile and complex transactions are in the very best hands. We are grateful that our clients continue to place their trust in us."