Etienne Prowse, CFO Cashbuild: Being accountable for IT innovation

Does a firm hire a Chief Information Officer or should IT and ERP-systems fall directly under line management? Building materials retailer Cashbuild has elected to put the responsibility squarely with each line executive and CFO Etienne Prowse says the company is reaping the benefits. “Even though IT implementation can get in the way of other tasks, we believe there is a huge advantage when the finance management is accountable for the automation.

Prowse knows what he is talking about, because has spent the last five years rolling out SAP’s information technology, first in the support office and then in the 208 Cashbuild stores. Initially Prowse was ‘seconded’ to the project as Financial Controller, but since March 2011 he has been overseeing the changes as Financial Director – the de facto CFO of Cashbuild. “Now we know what our systems can do, we can be more and more efficient,” he says.

It is easy for Prowse to demonstrate the benefits of the roll out. “In the past I needed to hire one extra accountant for every ten stores. Now we only need another accountant when we reach 256 stores, so that is a huge saving,” he explains. On the other hand there are still legacy issues that haven’t been ironed out, Prowse admits. “But that is normal for such a big operation, where we’ve introduced completely new hardware and software. Thankfully I have a good reporting team. Lately, I am getting more and more relaxed about the differences we find due to the transition – and these are getting less and less. The main thing is that the transition has not prevented me from reporting numbers I trust to the shareholders.”

The IT implementation “definitely got in the way of other things”, Prowse says. “That is not ideal for a finance leader, but it is not our culture to have a CIO and separate responsibilities. In the end that is a good thing, because this way the decision-makers retain ownership, responsibility and accountability. It also prevents continuously having to enter into unnecessary negotiations between a CIO and CFO.”

Cashbuild is the largest retailer of building materials and associated products, selling directly to cash-paying customers through its stores in South Africa, Namibia, Lesotho, Botswana, Swaziland and Malawi. Its shares have been listed on the JSE Securities Exchange since 1986. Prowse and his fellow executives are busy realizing an ambitious growth path, ultimately aiming at 30 percent market share. “There are a few issues that we are dealing with, which are currently pressing on revenue, but we have our growth target. Although it’s not top of our priorities, we are also looking at acquisitions – that will be one of the ways we can reach our ambitious targets.”

Contrary to many other South African firms, Cashbuild is mainly looking at the domestic market for growth, not so much at the rest of the continent. “Growing abroad is a hot topic, but not so much for us. We have 25 stores in neighbouring countries, but the growth potential is not the same as here in SA.”

Cashbuild mostly sells its ware to the lower end of the market, having successfully transformed from a wholesaler to a retailer. “Although customers are under pressure now, they’ve had a lot of access to unsecured loans in the previous years, which has been good for us. Now everything is a bit back to normal.” South Africa still has a lot of blind spots for Cashbuild, says Prowse. “For example in Mamelodi, near Pretoria, we should have at least five stores. At the moment we have none.”

Prowse says he is proud of the executive team he is part of, especially because it is an empowering environment that rewards good ideas. “I can bring things to the table – even outside the finance sphere – and if I can convince my colleagues, we go for it with a Process Improvement Plan.” Current issues that the executives are moving on are tightening controls, modernizing advertising and the way they handle delivery to customers. The latter has been kept under control in the past, but due to the rising costs of transport they have to carefully look at it. 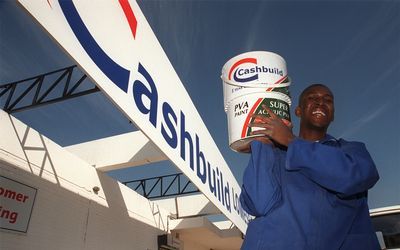 Cashbuild employs in excess of 4,500 people, most of them working in stores that cater for “homebuilders, home improvers, contractors, farmers, traders and any persons wanting to purchase our quality building materials for cash”. In the support office the company has about 200 staff and Prowse has 40 people in his finance team, he explains.

Prowse calls himself a “generalist” and “20 years qualified”. He says he sometimes has to “sit down” young, talented finance people and ask them to stick it out. “If you want to be a generalist with a commercial eye, like myself, you sometimes have to tough it out. I moved around quite a bit in the beginning of my career, but always I worked for good companies. That is important.”

Many people that have left Cashbuild for apparent greener pastures have come back in a few years, says Prowse. “That is because of our culture. Outside a lot of promises are made, but not many are kept. Here at Cashbuild honesty is key and hard work gets rewarded. You won’t get promoted every 6 months. Now you have to stick it out and your title might not change but you will get additional responsibilities. I compare my FM’s who are responsible for 1 billion rand businesses to FDs and CEOs elsewhere and ask them is it the title that matters?”