1. Harvard Study of 100,000 People: You'd Be Happier If You Had More Time and Less Money
Imagine you have two choices in how to proceed in your career: You can sign on to a high-profile, high-stress project that will result in long hours but greater earnings, or you can stick with a less prestigious career track and make less money but have a much more humane schedule. Which would you take?

2. Competitive advantage with a human dimension: From lifelong learning to lifelong employability
As AI-enabled automation advances, organisations should embrace “lifelong employability,” which stretches traditional notions of learning and development and can inspire workers to adapt, more routinely, to the evolving economy.

3. Three Inconvenient Truths About Corruption
These days, I sometimes begin my classes on corruption with an unusual admission. I announce to my students – who may be judges, police officers, military investigators, bureaucrats or any other variety of public official – that corruption is not a problem removed from me. I am corrupted too.

4. Our Digital Lives Don’t Need to Make Us Unhappy, Unhealthy, and Unwise
Fifty-five years ago this month, America reached a hazardous milestone: “peak tobacco.” Men and women that year smoked more cigarettes than ever before recorded – 523 billion of them. Only after four decades of slow decline – and millions of smoking-related deaths – did American culture reluctantly jettison tobacco as a symbol of social status.

5. The Top 5 Ways You're Burning Out Your Employees (and How to Stop)
In today's scorching laboor market, leaders can't afford to watch their best employees exit stage left. And yet, leaders are often the ones creating the drama. It leads to dramatically reduced energy levels and alarmingly increased disengagement levels – aka, burnout. Burnout is avoidable – if the leader knows what behaviors cause it. Here are the top five deadliest contributors to employee's feeling drained and ready to dart. Leaders, leave these behind. 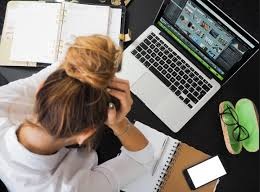 6. Why finance leaders must have an appetite for risk
The world has become a risky place. For years commentators were warning about a wave of disruptive forces, driven by technology, unleashing catastrophic damage on the business models of established, profitable companies. That scenario is now playing out everywhere. The ability to understand where their organisation should sit on the risk-opportunity spectrum, or developing an effective risk appetite, has become key to CFOs and other leaders...

7. Moving up the leadership maturity chain
Maintaining an ethical culture is about much more than changing rules and processes after an organisation's misdeeds. It's more than a compliance exercise to ensure the organisation remains within the law. It is about leadership. Ethical leadership can be defined as the process of influencing people to act through principles, values, and beliefs (characterised by honesty, fairness, and equity) and by respecting the dignity, diversity, and rights of individuals and groups of people.

8. Managers’ quandary: Ethics or targets?
Creating an ethical culture at work is more than crafting a code of ethics or putting words on a website – and the responsibility often falls on managers. As much as managers would like to uphold the highest ethical standards, recent surveys reveal that pressures to meet targets sometimes conspire to push business ethics to the periphery. And such behaviour should raise red flags in any organisation.

9. 9 Time Saving Hacks That Will Help Increase Your Productivity
Time logging can be a powerful and motivating way to show us where we're wasting away precious time and not even realising it. Since I began logging my time earlier this year, I've also been tweaking how I spend it, trying to maximise my most productive time while continuing to knock out necessary administrative tasks during my less-productive hours.

10. The war against Amazon was a war for cities–and cities won
Yesterday, Amazon abruptly announced that it would abandon its plan to build a second headquarters in Long Island City, Queens. For some politicians, like Governor Andrew Cuomo and Mayor Bill Di Blasio, who were key supporters of the deal, it was a devastating loss for the city. But for many Queens residents, fearful that Amazon’s arrival would mean rising housing costs and displacement, it’s a victory.