EPPF CFO Nopasika Lila's road to success - in her own words

“Growing up, I remember being told that accounting was a difficult field and that those who were studying to become CAs were considered to be part of the elite,” writes Nopasika Lila, CFO of the Eskom Pension and Provident Fund (EPPF), in this self-penned piece. “I was initially overwhelmed by the task at hand, but over time I elegantly succeeded. My confidence grew and I’ve learned to be a lot more decisive, deliberate and immediate in my actions.” In this guest article, Nopasika reveals how she charted her path to success, talks about her love for the piano, and shares some crucial lessons about mentoring and people management.

I was mostly raised in the Eastern Cape and took the decision to move to Johannesburg after completing a BCompt degree at the University of Transkei (now known as Walter Sisulu University). I felt that a move to Johannesburg would enable me to access more opportunities and role models in a more vibrant business environment. Like most chartered accountants, I have a collection of stories to tell about overcoming adversity and bias in the business world.

I believe that my family tricked me into becoming a chartered accountant! My older sister, Nomfundo Lila Qangule, studied to become a chartered accountant while I played the piano and dreamed of studying music. My family advised that I should be cautious not to confuse a hobby for a career and in retrospect, they were absolutely right. I have thoroughly enjoyed my career, but I have made time for my love of music, road running and other interests. To this day, I enjoy playing the piano and Richard Clayderman's soulful compositions are among my favourites. I have also taken the time to learn Chinese Mandarin and German, both of which I am able to speak, read and write.

Growing up, I remember being told that accounting was a difficult field and that those who were studying to become CAs were considered to be part of the elite. I would go as far as saying that the qualification was considered to be something that is not achievable and reserved only for a few. I was initially overwhelmed with the task at hand, but over time I elegantly succeeded. My confidence grew and I've learned to be a lot more decisive, deliberate and immediate in my actions.

After completing articles, I was keen on the financial services industry, especially asset management, as it was then still just a buzz-word in my experience. I joined Old Mutual as an introduction to the industry and then moved to the Public Investment Corporation (PIC) where I served as the Head of Compliance and Corporate Governance.

I ventured into entrepreneurship when I established Astute Intellect, a financial and governance consultancy. I co-founded this business with Nomfundo, a former Chief Financial Officer (CFO) of Harmony Gold. I missed the corporate environment and subsequently made the decision to move back, which is why I joined the Eskom Pension and Provident Fund (EPPF) as the CFO.

The EPPF is one of the largest retirement funds in South Africa, with over R130 billion assets under management and with a membership base in excess of 95,000 members. Working at the EPPF has provided me with exciting challenges, which I choose to view as opportunities for improvement. We have worked hard to serve our members and pensioners and make them aware of their benefits. Retirement funds from across Africa often visit our offices to enquire, learn and understand the successful growth of the EPPF.

What attracted me to join the EPPF were discussions held with the Chief Executive Sbu Luthuli, where he shared his vision of wanting to transform the role of CFO from the conventional accounting role that it was into a more strategic and partnership role that was a support to the CE. It has been an exciting challenge to be a part of this evolution of the CFO role.

Business and process re-engineering has made all the difference at the EPPF. We realised that, as the organisation changes, strategic alignment is important in enabling the entire organisation to move together as a team towards achieving the strategic goals. Factors that have contributed to our success include our people, improved reporting, implementation of new technologies which have made for both quick and accurate decision-making, the prioritisation of timely pension payments, integration with other financial institutions and the introduction of investment reporting dashboards. 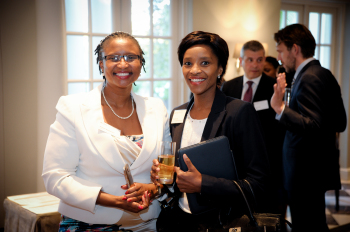 I enjoy strategising and seeing plans to fruition and there is no better place than the retirement industry in presenting those opportunities. I also enjoy keeping up to date with world news, which is an imperative, given that approximately 25% of the EPPF's assets are invested offshore, requiring that we are in tune with what is happening globally.

I have served in various Board and committee roles, which include non-executive directorships at JSE-listed companies such as Nampak Limited, Basil Read Limited and enX Group Limited. I am grateful for these opportunities and they have all contributed to growing my capacity as a leader for my current role.

As part of enhancing my leadership acumen, I attended a leadership programme at the London Business School and the Deloitte CFO Transition Lab. I gained valuable insight on ways of managing the complexities of the role and adapting to strategic shifts in the market.

Over the years, I have observed attentively how South Africa's boardroom dynamics have changed, which has improved my ability to deal with conflict. I've found it valuable to consider and understand the other person's point of view which has helped manage confrontation.

Leadership roles are demanding because one must balance the workload and provide the necessary leadership for the team. I think that people should be given freedom and be provided the latitude to be wrong and to learn from their mistakes. Over time, I have developed an inclusive management style and I am convinced that this yields the best results.

Business is about people and if you believe in them and they know you trust them, I can guarantee that you will be pleasantly surprised by their abilities, enthusiasm and commitment. Everyone is intelligent in their own unique way and understanding this has enabled me to listen with intent and build on the wisdom learned from others, harness relationships and thus making it easier to accomplish our set goals.

I endeavour to make a difference in people's careers and I really enjoy growing people. I have looked into how we can contribute to growing CAs at the EPPF and to this end, we are working hard to have the EPPF accredited as a SAICA training office for articles. I have mentored a number of CAs and encouraged them to pursue excellence in their careers. Young CAs often confuse the CA (SA) title with immediate affluence, but in reality, the change comes with hard work and experience. I remember having to work hard to prove myself as a young CA and came to realise that one should not be deterred by the environmental challenges. You just have to work hard, very hard.