On 6 December 2020, Nico took the opportunity of eased lockdown restrictions to get married.

JAM CFO Nico Esterhuizen made the most of the incredibly challenging 2020 by celebrating one of the happiest days of his life. On 6 December 2020, Nico took the opportunity of the easing of restrictions and married his now-wife, Easvarie Naidoo.

Easvarie was born and bred in Durban. After completing her articles in law, she was admitted as an attorney in KwaZulu-Natal. However, Easvarie knew that she wanted to work in the corporate world, so she relocated to Johannesburg where she started working in the corporate and banking sectors. She later moved to the insurance industry, where she has been for 12 years. She currently works for Lloyd’s of London as the general representative in South Africa.

Nico met Easvarie in November 2013 when she started working for the South African Insurance Association where he had been contracted to represent the short-term insurance industry on the Solvency Assessment and Management (SAM) project. “I led that project on behalf of the insurance industry for a number of years. When Easvarie joined the organisation as a legal manager, we had to work together as the project was moving into its legal phase.”

They made the transition from colleagues to friends, and eventually started going for coffees and lunches together. Nico believes that a strong foundation from their early relationship was that they were using their friendship as a basis. “I’ve got a friend that always refers to healthy relationships as a friendship on fire.”

Easvarie explains that, because they were friends, it was so much easier to get to know each other and understand each other better. “We’ve both had difficult first marriages and it was something that was also a base for us to understand what we’ve been through independently.”

She says that this helped them understand what would not be negotiable in a relationship, as well as what they liked and didn’t like. “Those were the conversations that led me to realise what an amazing person he is.”

After three years of friendship, they started dating and two years later they got engaged.

Asked what made them fall in love with each other, Easvarie says that she was struck by Nico’s humility, integrity, intelligence and kindness. “He has the biggest heart and to find so many of those good qualities in one person is quite special.”

Nico explains that Easvarie’s honesty, integrity, compassion for others, desire for true equality and beautiful personality was what made him fall in love with her.

They were planning to get married on 29 August 2020, but Covid-19 threw a spanner in the works. “When the regulations started to lift, we decided to take the window, because we knew a second wave was likely to happen,” says Nico. “So we made use of the opportunity to get married.”

Easvarie explains that, initially, she was not so keen on the last-minute wedding. “I was quite nervous to put together a wedding in a month. But I think when you are put into a situation you find a way to do things, be creative and find a strength you didn’t know you had.” 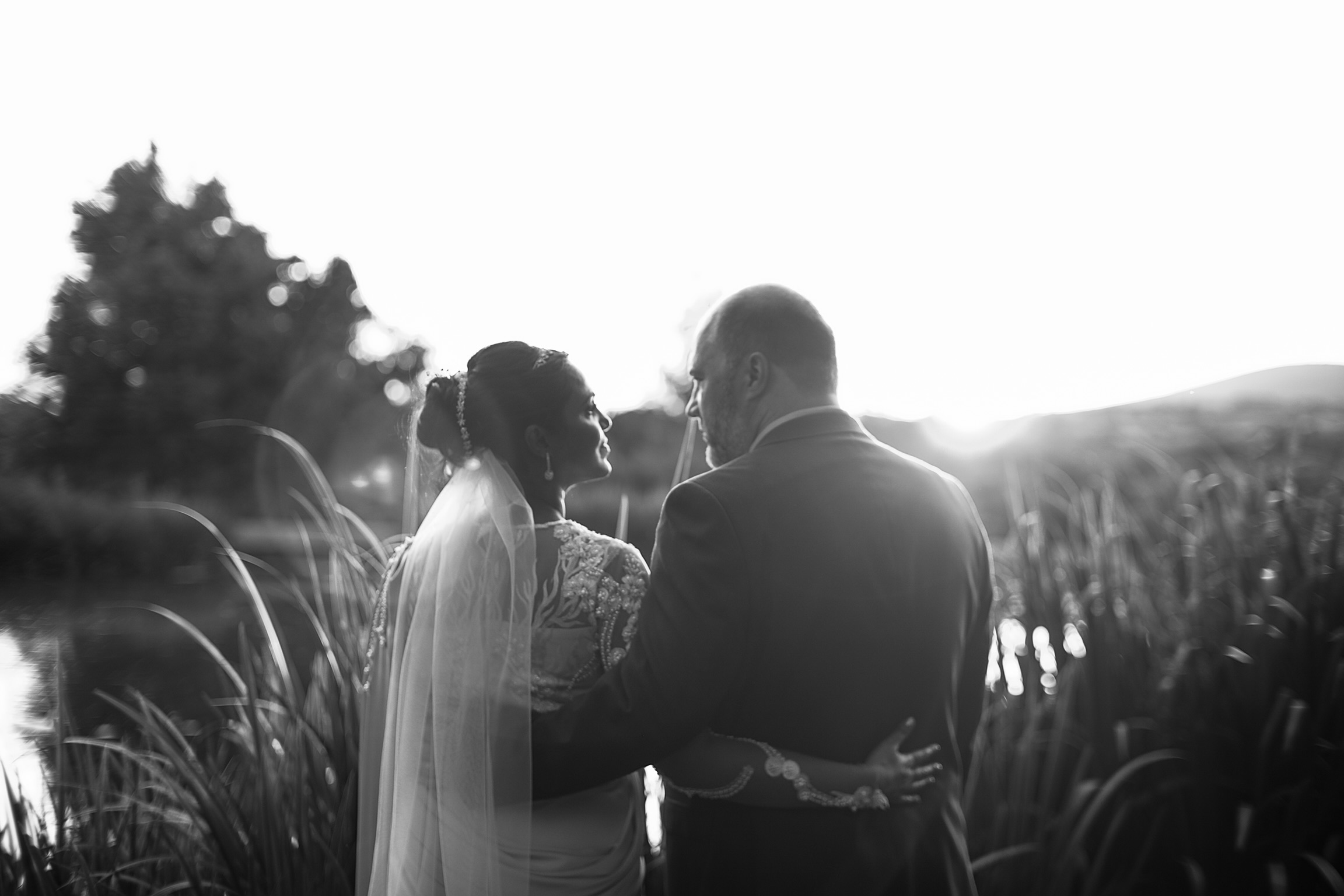 Although the wedding was cancelled in August, our venue, Cradle Valley Lodge in Muldersdrift, Johannesburg, already knew our needs and it was only a matter of finalising the decor and menu of the new date. But, Easvarie says that the other elements, like the dresses, were a bit more difficult to pull together in such a short period of time.

“We had a fusion themed wedding and I wanted a dress that was a combination of a Hindu bride and a Christian bride,” she says. “I have an extremely talented designer friend, Gene Pillay of Gene Design Studio, who just looked at a picture I found on the internet and within three weeks she made the dress exactly the way I wanted it.” Gene also made outfits from saris for longtime friends, Videshni Singh and Managie Pillai, who were her bridesmaids.

Another challenge was reducing the number of guests from 160 to 60 people due to the Covid-19 restrictions still in place. “It was difficult, but we had the people that were closest to us there,” Easvarie says.

She adds that, despite it being challenging, they managed to pull everything together in time.

Unfortunately, they were unable to go on their honeymoon after the wedding, not only due to Covid-19 but also as Nico had to go to Sierra Leone for work straight after the wedding. “I had to meet with government officials because we’re one of only two partners that’s doing national school feeding in Sierra Leone. So the honeymoon is on hold until we have some options.”

The SOLA Group CFO shares why renewable energy is important to him, and how the industry is booming.