“The difference between a good and a great CFO is that the latter assists his CEO pro-actively and spends a lot of time in the business,” says Karl Kumbier, Chief Executive Officer of Mercantile Bank. In a candid interview with CFO South Africa he talks about his impressive career in the banking industry and the way his bank can help spur on economic development and employment by providing financial solutions for entrepreneurs.

As a banker Kumbier has a good idea of the quality of South African CFOs, which he describes as 'brilliant'. "A lot of them are CAs. It gets very technical and they are keeping up to date. I believe that a good CFO pays attention to detail, doesn't miss deadlines and can write good reports. But a great CFO is also pro-active." Although Kumbier still deals a lot with CFOs, his key partners are now entrepreneurs, whether they are CEOs, CFOs or small business owners.

Since last year Kumbier has been leading Mercantile, a business and commercial bank which was founded in 1989. "We are a bank for the SME-sector, but that is a very diverse group because it ranges from companies with an annual turnover of R5 million to R1 billion," he explains. "We don't work with start-up businesses, but offer solutions for growth. Although you hear a lot about start-ups, most of them fail. We believe what's really needed is to put financial weight behind our entrepreneurs that have proven themselves."

The CEO acknowledges that the investment climate in South Africa is "quite tough" at the moment, with many foreign and local investors worrying about labour issues. But Kumbier is not one to sit back and complain. "What Mercantile can do is provide financial solutions for entrepreneurs. Just last week I met two customers. One had grown from 28 to 150 employees, the other from 3 to 30 with our help. That is very exciting, because we are contributing to proper job creation. Another client, which we've worked with for 6 or 7 years, has grown from 2,000 to 12,000 staff in that period."

Kumbier did his articles at PwC and after a gap year, a stint at a family businesses and a role as Financial Manager at a JSE-listed company, he moved to the investment division of Standard Bank. "I always wanted to get into banking. One of the things I loved about my accounting days was getting to see many different businesses. The same goes for banking. Helping businesses grow is what gets me out of bed every morning." After a period in investment banking, Kumbier headed-up Standard Bank in the Western Cape and worked as COO for Stanbic in Ghana for two years. "I am very grateful to Standard Bank that they gave a young person like me so many opportunities to learn."

Although Kumbier and his family were enjoying their expat life in West-Africa and were planning to stay much longer, he jumped at the opportunity when Mercantile came knocking on his door four years ago. "I knew about the bank from Dave Brown, who was CEO before me and who also came from Standard Bank. Mercantile has twice the amount of capital that the regulators set as a minimum so it's a healthy business. There was also the carrot that, if I performed well, I would be in line to succeed Dave and that happened last year, when he retired."

Mercantile is 100 percent owned by the biggest bank in Portugal, the state-owned Caixa Geral de Depósitos (CGD). "There is a big opportunity for our holding company to create more synergies with their operations in Mozambique and Angola," says Kumbier. "CGD has a wonderful footprint in Africa and there is a big drive towards more cooperation between their companies by our new chairman of the board, Nuno Fernandes Thomaz, who is also on the board in Angola and Mozambique."

But Kumbier doesn't need his Portuguese boss to tell him to be ambitious. Growth is key in the South African banking sector and the CEO is planning to double the size of Mercantile's business in the next 5 years, growing from 15 to 25 business centres - as the modern, open plan branches of the bank are called. "Scale is something that needs to be addressed. Of the small banks, we're the only fully-fledged one. There is nothing we can't do. We want to carve out a niche in the middle as the bank for entrepreneurs. We have implemented a new core banking system, which is scalable, so we're ready for massive growth."

In the past few years Mercantile chatted to direct competitor Sasfin Bank and investment company Bidvest about possible mergers, but that never lead to anything. "We looked at quite a few acquisitions," admits Kumbier. "The problem is that everyone wants to keep the control of their current holding company. We have now resigned ourselves that we won't merge with another bank. That is why we're looking at opportunities for smaller acquisitions. For example, we bought rental finance business Custom Capital, which had rental assets of R34 million and has grown over 10 times in the last few years. Our growth strategy also includes refining our products. Turnaround times are a key issue for entrepreneurs. They want a quick answer and we need to be taking the paperwork away."

Kumbier expects the business centre concept to be an important part of future success. "We're the first bank in the country with this concept. It is completely open plan. We did our research and all we need to offer physically for clients is facilities where they can deposit and withdraw cash. That means we can build centres for a fifth of the normal costs of a bank branch. Back office functions are now centralized which means the buildings can be half the size with just 50 percent of the staff we used to have - it really becomes a sales centre." 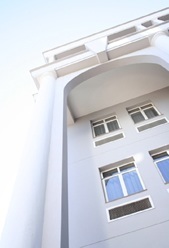 A move into retail banking is not on the cards for Mercantile, says the CEO. "The opportunities are in the business banking space. Clients want good relationships and that is what we offer. We have relationship managers who do everything, from property to asset finance and credit cards. You don't have to speak to different people. We also have installed a big device from Japan that counts cash and deposits it immediately in a client's accounts or gives out cash in specified denominations. For example, a customer in Gauteng would in the past have spent up to an hour and a half each day counting the cash. Now, that's all done in 10 minutes."

Due to the economic turmoil in Europe, and Portugal in particular, holding company CGD was downgraded substantially a few years ago. Kumbier acknowledges this has impacted Mercantile as well. "Moody's came and told us they have to downgrade us 2 notches. That obviously has made it more difficult to attract funding, but we took it on the chin. We negotiated with the International Finance Corporation of the World Bank, which loaned us R490 million. We also started Mercantile Online Investments, a facility for property lawyers, which raised R200 million. We also securitized the book of our rental finance business which attracted another R240 million from the IFC. Next year we want to securitize our home loans too."

Another consequence of having CGD as 100 percent owner is the extremely low BBBEE-score it results in when it comes to ownership. Kumbier says the Portuguese owners are slowly starting to understand how vital it is that a black South African partner is found. "The question is: are we finding a black partner right now? Will it be the right partner? Or do we concentrate on building up the bank? I think it will happen: if it is not in one year, it might be in three years. Although the lack of black ownership is not hampering us, it is the right thing to do in this country."