As the CFO of Nando's South Africa, Simon Adams stands behind the company's strategy to make South Africa a better place, whether it's through their chicken, their community projects or their investment into South Africa's local designers and artists.

Founded almost 33 years ago, Nando’s is known for its famous “PERi-PERi” chicken, edgy advertising and helping the communities of South Africa. It has grown across the globe into all hemispheres including the US, Canada, UK & Ireland, Australia, New Zealand, Middle East, Africa, Malaysia, Singapore and India, but it’s remained true to the country where the magic started. “South Africa has been the soul of the company since day one,” says Nando’s CFO Simon Adams.

“There are a lot of things we weave into our brand DNA,” Simon says. “CSI is one of these. Nando’s is passionate about South African Creativity so much so that it’s not just CSI to us but it’s just the way we do business.”

Each one of the more than 1,200 Nando’s restaurants is individually designed: there are no set templates, meaning that South African designers are free to display their talents in collaboration with the Nando’s design team. As Nando’s has a global presence, local designers have also had the opportunity to showcase their work in restaurants around the world. Indeed, “The design of our restaurants is centred around our investment into the South African creative space,” says Simon.

In 2018, Nando’s launched the “Portal to Africa”, a design-based channel that connects small to medium South African design and art entrepreneurs to Nando’s global operations towards helping to build and grow the businesses of small-scale South African designers.

Nando’s is also involved in the annual Basha Uhuru Freedom Festival – a youth festival to celebrate creative freedom through strategic activations aimed at nurturing and uplifting South African creativity. Conceptualised by youth for youth and fittingly hosted at the Constitution Hill, it is a creative and vibrant stage for South African design and art, accessible to the diverse youth of the country.

While it is separately run and was co-founded by one of Nando’s founders, the Goodbye Malaria initiative also has very strong ties to the restauranteer’s brand. “We source our chillies, the African Bird’s Eye Chillies that go into our world-famous PERi-PERi sauce, from PERi-farms in Africa, which is known to have the highest prevalence of Malaria in the world – Mozambique being one of the most affected,” Simon says.

The project initially oversaw the provision of mosquito nets to the affected communities, but it was very difficult to accurately determine the impact it had. Now, teams are spraying the homes of communities in the surrounding areas with mosquito-repellent insecticides, something that has now protected the lives of over 1.7 million people. “As a dedicated partner to Goodbye Malaria, Nando’s hosts a number of trips to the PERi-farms in Mozambique where we are able to share with our own business partners and ‘nandocas’ – a term used to refer to the Nando’s employees – both local and international, the incredible work that is being done by the Goodbye Malaria team”

The dream is to eliminate malaria by 2030 in Mozambique, eSwatini (formerly Swaziland) and South Africa.

When visitors sit down for lunch in the Nando’s head office, they won’t see any people wearing suits and ties. The nandocas’ personalities are creatively expressed through the clothes and hair styles. It makes for a very colourful sight and echoes the edgy culture showcased in their advertising.

Simon believes that their advertising is what helped Nando’s expand so successfully in South Africa but it is the quality of their PERi-PERi chicken that facilitated the global expansion. “We’ve framed our advertising in South Africa around the voice of the people. Over the last 30 years I think we’ve earned the right as a brand to be able to voice what South Africans are really thinking as long as we are authentic in the way we do it and are able to do so in a way that is slick, smart and South African.” 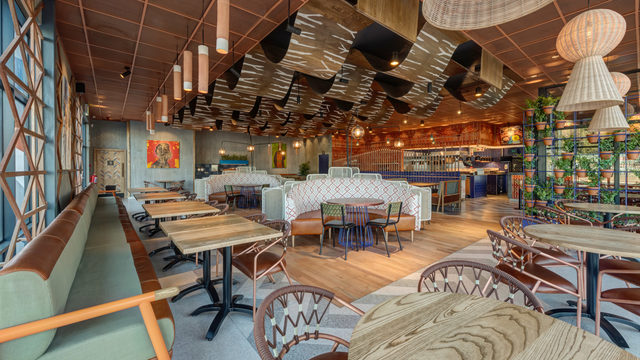 Nando’s South Africa has a hybrid model that consists of both company-owned restaurants and franchise models. It’s Simon’s job to think about how Nando’s allocates capital to its own restaurants and to make sure that the business model Nando’s offers to the market is sustainable for franchisees to get involved in and grow with the brand.

“Building restaurants can be economically challenging for a variety of reasons however close to the top of the list is the rental obligations in the context of a digital age. You have to pay for the space you occupy,” Simon says. “This is challenging because, as technology takes hold and the preference for the convenience of deliveries increases, off-premise consumption of your product is occurring so much more, yet you still have the obligation of renting a space for the restaurant that your customer potentially does not need to come visit.”

Simon adds that one of the key challenges he currently faces is to manage the profitability of the explosive growth in deliveries and align it with the core service channels of the business.

South Africans are also finding it more and more difficult to fund their day-to-day living expenses, which has an impact on retail and restaurant brands. One of the things people give up first is going out and spending money on things that are seen as a luxury, like eating at a restaurant. “We play squarely into that space,” Simon says.

Nando’s is a casual dining restaurant brand that has the ability to serve customers either in restaurants, through take-away or drive-thru channels, or as already mentioned the fast-growing option of delivery. However, people are choosing to cut back on casual dining because their money isn’t going as far as it was before. Simon believes that the quality of their chicken, supported by stringent quality control measures, coupled with their “amazing nandoca service” is a countermeasure to this pressure.

“We stay ahead by making sure we don’t compromise on our core offering, the chicken, by making sure that the value offering we’re giving to our customers is not questionable,” Simon says. “When you walk out of a Nando’s we want you to feel satisfied that you have spent your well-earned money on something as good as our chicken.”

Distancing himself from work

Simon has been involved in the restaurant industry for just over three years and describes it as being one of the most stressful environments he has had to operate in. When asked how he stays calm when faced with these stresses, Simon says that he believes in building meaningful relationships at work.

“I’ve come to learn that it’s massively important to have people around you that will keep you sane and grounded. When you have to make difficult decisions and balance the stresses that are happening to and around you, it helps to be able to bounce it off some  pretty cool people with whom you have a bond that’s probably a little  stronger than just work colleagues.”

He believes that it’s important to distance yourself from work every now and again. Having worked on building strong relationships within the company and in his own team, he finds it easier to take time off knowing that the wheels are still able to turn when he’s not there. But he admits that it’s not something he gets right all the time.

“When I can, I try to play a few rounds of golf,” he says. “That does also help me manage the stress because I am generally on the course with people who I like and respect and enjoy being around, and it’s outdoors – away from the office.”

Simon is married with three young children. When he’s not working, he’s spending time with them, whether it's swimming, riding bikes or ice-skating (badly, he adds). He also likes watching movies with his wife. “We’re still pretty big movie-goers when we can find someone to watch the kids,” he says. “We’ve got a great support structure around us, whether it’s my wife’s family or mine, and while they watch the kids, we get the chance to hang out like we did when we were teenagers.”

Simon’s favourite Nando’s meal is the pulled chicken sandwich, which he says is great because it doesn’t come with garnish. “You see I’m not that fond of greens and I was always a burger and chips guy, but had to ask for it with no garnish which for some reason I always feel bad doing. With the pulled chicken sandwich, I don’t need to pull anything out or ask anyone in the kitchen to do it for me.”

He has, however, gotten much better at eating his vegetables in the 21 years he’s been with his wife. “She’s moved me away from not eating any to being at least a little bit experimental here and there. But it still is a real struggle for me.”

Mark has always had an entrepreneurial spirit, from selling caps on the beach as a child to now building a megacity.

After working abroad for many years, Ryan McDougall returned to South Africa in 2019.