“As a finance team we can bring our own products into the conversation with our business partners and our customers, by talking about how we do things at Microsoft.” Discussions about finance transformation and the evolution of the CFO can sometimes sound theoretical and dry – not so with Paul Marten, Finance Director at Microsoft South Africa. Using the same tools that his famous firm is selling, he embodies the outward looking finance leader of the 21st century.

We spoke to Paul -who hails from the cathedral city Chichester in the south of England - about the 'new Microsoft', the fascinating journey that finance is undergoing at the IT firm and the blessings - and jitters - of his move from the United Kingdom to South Africa.

"When I talk to my team I always use the analogy of the rally driver and the co-pilot," Paul explains. "As finance people we are not the guys in the pit stop, waiting for repairs or maintenance to be done, or to change tyres. We should be the person next to the driver, looking forward through the window at the road ahead and giving directions." And reading the map? "Those are our strategic plans."

You can spend a lifetime reading articles, white papers and books on the role of the modern CFO, but one of the common denominators is that the focus of the finance chief should no longer lie internally. "The role of the CFO continues to be more outward looking and external facing. In the future I expect the job to be even more out there and involve meeting with customers and engaging with communities. Understanding external factors that impact a business is crucial for sound financial guidance and I can even imagine partnering with CFOs from competitors on some issues."

The transformation of finance teams across Microsoft comes on the back of the shift from software company to device and services company, something CFO South Africa spoke about in depth with former Microsoft SA CEO Mteto Nyati in 2014. "Microsoft is transforming itself," Paul adds. "We were a company that aimed to put a computer on every desk and every home, but the new global CEO Satya Nadella is all about collaboration. Now our mission is to empower every person and organisation on the planet to achieve more. We aim to be the leading productivity and platform company for today's cloud first, mobile first worldview. That has been a massive mindset shift."

Up until 5 years ago Microsoft still had Office and Windows as its cash cows, Paul says.

"The decision has been made to become a more transparent company and work together, even with competitors, to ensure that people are able to be more productive regardless of the device they use".

To stay with the rally riding analogy, Paul says that Microsoft's transformation had meant that finance has had to shift gears. "Priorities have changed, with big data, business intelligence, social, cloud and mobile all being relatively new things that weren't here 10 or even 5 years ago. Globally, we have taken three specific steps to transform our finance organisations. The first step was to centralise the finance function. Every country had their own team with their own ways of doing things. Now all transactional work is outsourced to companies who can do it faster and probably also better than us. That means the finance teams in the countries have to become strategic business partners." 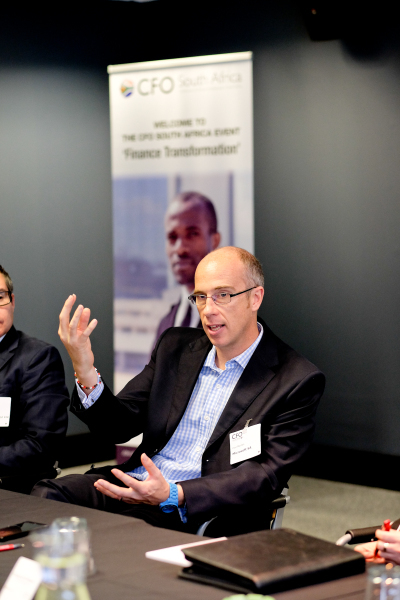 The second step was "getting decent data to work with", Paul explains. The third and last step - and probably one that's only really happening now - was to gear all Microsoft's finance teams up to better utilise Microsoft products like OneNote, Skype, Sharepoint, Power BI, OneDrive and Yammer.

It has been a fundamental shift, allowing much better interaction with internal business partners who are selling those very same products - and helping finance play a role in the continuous improvement of Microsoft's products.

"When my business partner comes off the plane, he already has the right documents on his devices through the cloud without having to email them. As a controller for South Africa I can get a quick glimpse of month closing figures and I don't have to go and talk to at least 10 people. It increases my efficiency as a finance leader and fits with our philosophy of 'one message, one experience'."

The benefits for the finance team are multiple, Paul says. "When we do a demo of what we do, people's eyes light up. When you see the reactions, it is a good reflection of the way we operate and how we are enabled, because most people are so impressed when we explain how we operate - with our own products - as the finance team at Microsoft." Paul makes a point of emphasising that the shift is not a case of just plugging in some other software. "The key thing is that people are the enabler. It has been a big culture shift from policing to becoming a member of the leadership, being an advisor."

The changes at Microsoft and the changes in the very nature of the finance function of the organisation have suited Paul to a T. "For me it has been fantastic. I believe Microsoft has a fantastic culture. It is open, honest and collaborative. The managing director comes to me and asks me what I think. Being able to influence the business and having the opportunity to learn globally is something not a lot of companies offer. Through Yammer I can talk to peers across the globe and, for example, learn how the FD in Brazil has dealt with issues that are similar to the ones we are facing."

Change has not only come for Microsoft and the finance function, it has also rocked the lives of Paul, his wife and their two young sons. After a Microsoft career in the United Kingdom that dates back to 2005, Martens came to South Africa in December 2013, ready for a new adventure.

"I have been with the company for 10 years, where I have grown and developed a lot, plus there have been opportunities to travel the world. Moving outside of the UK, which is a developed country, was something I was keen to do."

Paul says he has enjoyed his time in South Africa so far, both personally and professionally. "If you haven't been to South Africa, your image is skewed through the media, which sell papers by focusing on the negative things. But I had friends here and we went on holiday to check it out before I decided to take the job. When you sit down and think about it, Johannesburg has the same challenges as other big cities around the world, whether it is London, Birmingham or Paris. The culture and the lifestyle is great and my sons love all the sports."

The job in South Africa is also a significant career leap for Paul and the first time he is a 'real' CFO. "In the UK I was responsible for about a third of the business. The breadth of this role is Microsoft-wide. Obviously the transactional stuff is outsourced, but I am still responsible for the audits and the accounts. The most exciting aspects of the job are the challenges and opportunities. As finance we can challenge the status quo."

At the same time, the move to South Africa - and into the CFO role - was a big change," Paul admits.

"I spent time understanding the part of the business that I hadn't worked in before. The challenge was to leave that business and trust the business partners there, not make a nuisance of myself. That can be challenging for a finance person who relies on numbers. I want details and control. On top of that I was doing everything in a new country and culture, which brings an extra layer of complexity."

To deal with it Paul relies on more open communication with his team, a 'journey' they are still on together. "Feedback is a powerful thing. People should tell me when they want to run with something. When I ask questions, it is not to catch them out but to understand what is going on. It takes time for this to bed in and it doesn't come automatically. For me as a CFO, being comfortable with uncomfortableness is hard. You don't always knowing what is coming. There will be things that surprise you. That causes stress. You need to be mature enough to realise this is the norm."

For Paul the impact his company makes is also one of his great motivators. "One thing I am proud of is the external work we do across education, with small ISVs and in the public sector space. To be able to be deeply involved in the conversation and to make decisions about rolling out connectivity that makes a difference in rural areas and in the country is very cool. For a CFO that is fantastic. Being personally involved isn't something that happens in many other countries."