MMI Holdings group CFO Mary Vilakazi has been nominated for the 2017 edition of the CFO Awards.The annual 'Oscars for South African CFOs', to be held on 11 May, recognises CFOs of listed companies, large corporations, state-owned entities and government institutions and awards them for outstanding performance and leadership.

Mary, who was born and bred in Alexandra, became one of the youngest partners at PwC in the world at the age of 27, before going on to assume her current position at the financial services behemoth, which was formed from the merger of insurance-based players Metropolitan and Momentum. She has also served as the CFO of the Mineral Services Group and as an independent consultant.

In addition to her executive functions, the CFO who featured on the cover of CFO Magazine in 2016, is in demand as a non-executive director, filling positions on the boards of Kagiso Media, Holdsport and the Commission for Conciliation, Mediation & Arbitration, while also chaired Remote Exploration Services and Remote Drilling Services, which are part of the Mineral Services Group, and advising the Financial Services Board on long-term insurance.

As a young black woman in a sector dominated by whites, Vilakazi has had to overcome many challenges, she explained in a previous interview with CFO SA. 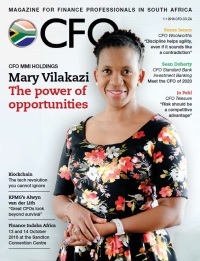 "That was a bit of a struggle. It probably still is, but I think it is less of one now. You feel you have to disprove stereotypes and prejudices all the time. It may feel that there is unfairness in the system. At the same time I also worked with white people who felt they didn't get a chance. I guess that is the story of South Africa. That is why I took a personal approach, focusing on my abilities to prevent getting bogged down. Even my age was an issue, as I was still in my twenties."

"I had to work on myself, think hard and gain perspective. Those three tags were quite a load to carry. They put me under enormous pressure not to fail and let any of those three constituencies down. I couldn't drop any balls. I came from a society that was dominated by white males, so in a way I also believed in that and carried my own stereotypes, but I realised that was not helpful. I examined my own strengths and managed to free myself from those things. That would also be my advice for others in similar positions: focus and perform to the best of your abilities."

A keen runner, she credits her bookkeeper mother with supporting her throughout her career and giving her a grounding in entrepreneurship and financial management by forcing her to earn her pocket money by selling lollipops.