According to the latest Robert Walters South Africa Job Index, the last quarter saw a 6% overall decrease in job advertising volumes compared to Q2 2015 in SA across all finance functions; with a 15% annual decline in job advertisements in accounting and finance overall. Robert Walters, a leading specialist professional recruitment consultancy, attributes this decline to the compounding effects of consistent political uncertainty, a British and European economy which has been paralysed by Brexit, and challenging currency exchange rates for South African importers. 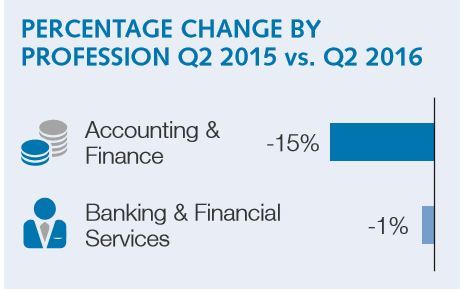 "Many organisations are hesitant to increase headcount, only filling vacancies that are business critical. Where possible, roles are filled internally or just absorbed by existing functions... It is pertinent to note that amongst the mid-level professionals living and working in big cities, many are challenged by rising monthly costs and keeping up with high living standards; as such to stay ahead such professionals are required to seek greater reward by moving jobs and companies; this too has meant that churn in the market does mean that there is liquidity and new opportunity in businesses."