Finance executives who flocked to the last CFO Summit of year in Johannesburg were treated to exclusive insights from Standard Bank's 'super economist' and treated to a thought-provoking panel discussion with business leaders.

Uncertainty seems to be the order of the day in South Africa at the moment, with political instability, state capture and economic woes all contributing to a decidedly bleak forecast. Standard Bank chief economist Goolam Ballim shared his unique insight into the various political and economic scenarios that could emerge in 2018 in an enthralling keynote address during the CFO-only sixth CFO Summit at the opulent Summer Place in Sandton on 16 November 2017.

He was joined later by an expert panel that included Etienne Nel, CEO ZAR X, Sihlalo Jordan, Deputy CEO Deloitte and Nico Botha, CFO, CitiBank. The panel agreed that business needs to take the lead in shaping South Africa’s future. The guests were welcomed by CFO SA MD Graham Fehrsen, who acknowledged the role played by Standard Bank in sponsoring the final Summit of the year. 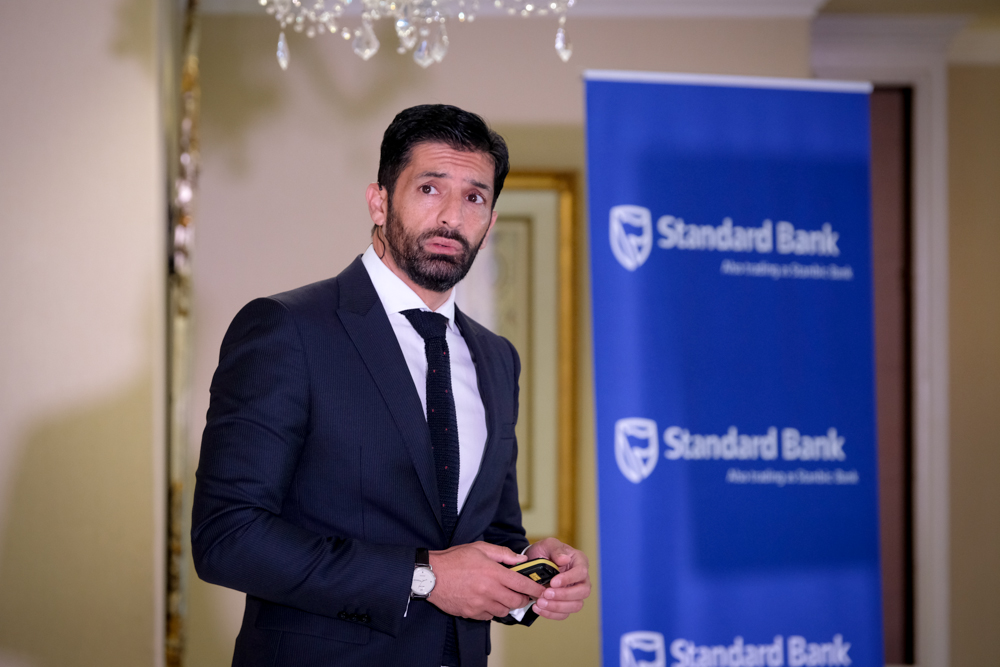 “We live in a time of extreme turbulence and the events in Zimbabwe seem like a precursor of things to come. CFOs need to help their boards prepare for and navigate 2018, so we thought it best to offer perspective and insights in this regard at the last Summit of the year,” he explained.

As fascinating as Goolam’s address may have been, he also painted a decidedly bleak picture of SA’s economic horizon, even joking that he would not be invited back.

The ‘super economist’ presented a series of sobering statistics illustrating just how costly the political leadership vacuum and instability, idiosyncratic dynamics and “industrial-scale corruption” had been for the country. Said Goolam:

“The economy has been jeopardised by leadership vacuum. As an exercise in imagination, I am depicting GDP growth in absence of 2008/9 crisis and idiosyncratic and external costs and shocks. Without these, the GDP would be rising towards R4 trillion. They have been exceedingly painful for South Africa, costing us R1,9 trillion in revenue opportunity. Political stability and macro-economic configuration would mean R1 trillion added to the GDP and one million formal sector jobs. Five million South Africans would have had their lives improved."

He stressed the importance of the ANC’s elective conference in December, calling it an epoch-making event as significant as the 2007 Polokwane conference or the 1994 elections. Goolam said the outcome would have long-term implications, providing some candid insights and opinions for the gathered audience in a discussion of the effects that the various conference outcomes could have. 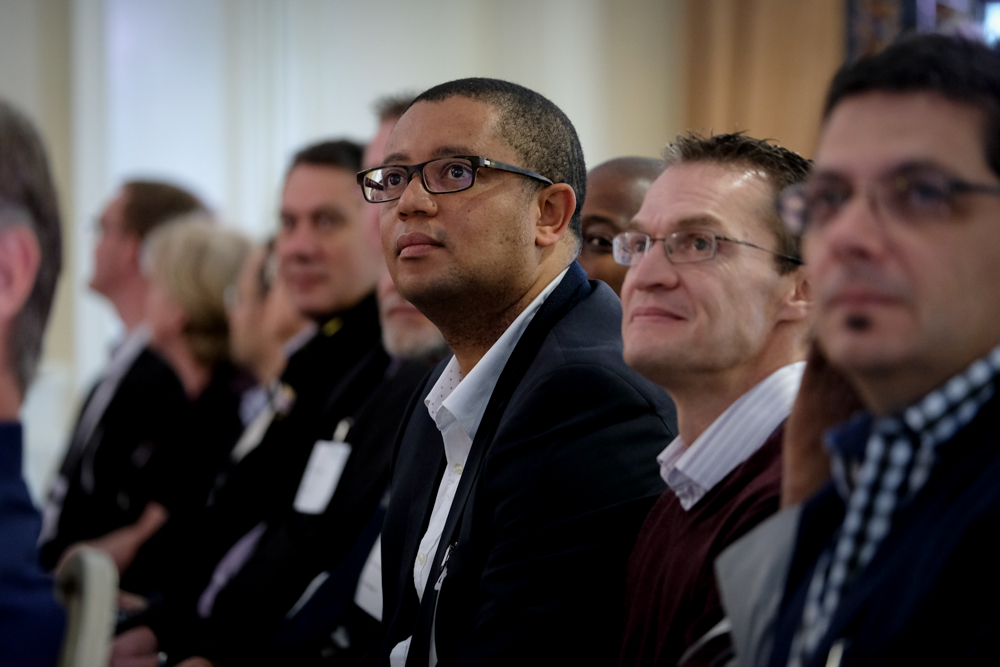 “Many CFOs are more than informed than CEOS by virtue of their proximity to data, but we need to step out of our echo chambers. I recognise individuals in financial services tilted towards radical economic transformation, whose own aspirations may have not been satisfied. They need to know that economic growth of 5 percent would mean monumental change.”

Sihlalo issued a clarion call for the country’s business leaders to band together to resurrect the economy.

“As the top 10%, we can’t afford to stand on the sidelines or bury our heads in the sand. I am passionate about economic growth and its impact on the structure of the economy. We have the opportunity to come out from the fire with a structurally balanced economy and bring meaningful change to the majority of South African citizens. Understand what you are in control of. Look for the green shoots and manage the balance sheet accordingly,” he said, recommending that an organisation be established to verify facts coming out from parliament and public sector institutions.

Nico urged the financial executives in attendance to work on resolving the thorny issue of inequality in South Africa and stressed CitiBank’s commitment to the country.

“We simply have to address inequality in a sustainable manner. Improving the lot of the wealthy people at the top of pyramid and waiting for it to trickle down has not proved effective. We will not be able to progress until we find a way of fixing the problem. As business leaders, we haven’t been effective in driving financial inclusion. 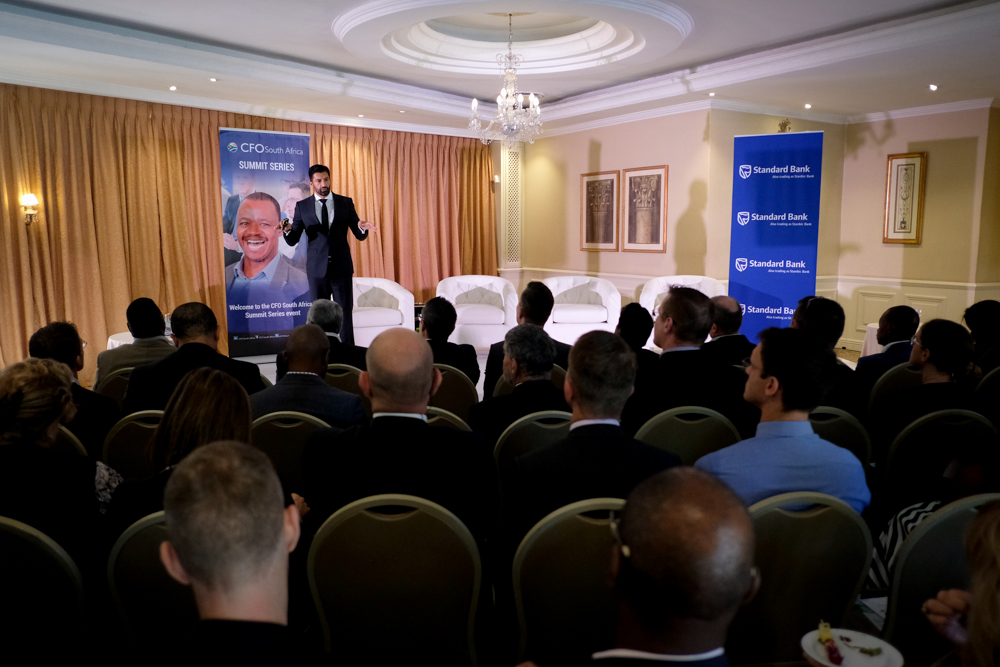 “CitiBank remains as committed to South Africa as ever. We have made large-scale investments into low-income housing. It is a painful time, but we remain committed to finding a resolution to enable the economic growth we desperately need. CitiBank has been around 200 years and is present in 100 countries – we have seen this type of problem in other emerging markets.”

Etienne said he was a big believer in sustainability and driving financial inclusion and lived his values. He explained that ZAR X had done the hard yards in launching in a tough year.

“Thought drives action, but negativity drives inaction. The biggest risk we face is the wealth gap. We’ve seen at ZAR X that the behavourial pattern of ownership in the economy is completely different to the employee or passive onlooker.

“We have been here before. We were facing civil war in 1993, with people hoarding canned food. But there is opportunity and we need to be open to it. Business leaders are sitting on significant capital. As business, we need to take ownership of this country’s future,” he said, making an example of ZAR X-listed Senwes as a company that was making a positive contribution to South Africa in feeding electricity back into the grid.