Afgri Group CFO Rivasha Maharaj made time to mentor a Grade 12 scholar throughout her academic year.

For Rivasha Maharaj, Afgri Group CFO, working with people has always been her favourite part of any job. “I have a personal passion for people and have always found empowering and coaching my staff to be hugely fulfilling. I never had any professional qualification in coaching, but it was something that always interested me.”

In 2017 she decided to pursue this passion by qualifying as a transformational life coach and registering with COMENSA, the SAQA-recognised professional body for coaching and mentoring in South Africa. It was also through COMENSA that she was introduced to the possibility of volunteering at the IkamvaYouth programme.

Rivasha found it humbling to learn about the challenges that the young people in the programme face. These include poor living conditions, drugs and peer pressure. But IkamvaYouth helps participating young people to rise above this. “The programme has achieved amazing results over the last few years, and it is an absolute privilege to work with the kids and be part of their transformation,” she says.

Founded in 2003, the organisation works with underprivileged Grade 8 to 12 pupils with the aim of improving pass rates and study horizons beyond school. A staggering 50 percent of South African children do not make it to Grade 12 – this is approximately half a million pupils each year.

Volunteers like Rivasha support learners to visualise their dreams for the future and imagine a life beyond their present reality. In practical terms, this means ensuring that each Grade 12 student applies to at least three post-school opportunities.

Playing a ‘big sister’ role
In 2019, Rivasha was paired with Palesa* a Grade 12 schoolgirl, and she took on a ‘big sister’ role by spending two hours with her every Saturday throughout the academic year. Rivasha’s regular presence helped Palesa to make better decisions regarding her future and navigate the challenges of adolescence and township life.

“Sometimes it was simply practical advice. Like most youngsters, she had no idea what was appropriate to post on social media. Here I guided her and explained the consequences of poor social media choices and that prospective employers do look at a candidate’s social channels,” says Rivasha.

As Rivasha soon found, access to data is a major constraint to most learners, making it almost impossible to research an area of study. She supported Palesa in making the decision of whether to study law or tourism by doing extensive research into each field and the various bursaries available. “It’s not enough to say you want to become a lawyer. You need to know what type of law appeals to you. These questions take time to answer,” Rivasha explained.

Having lofty ambitions is one thing, but having a strong academic record is quite another. Goal setting and tracking formed a big part of the relationship. “Every quarter we would set goals for percentages to be achieved. We’d talk about allocating time to study and what would be required to achieve those goals. We’d also plan to celebrate the good results.”

For Rivasha the biggest lesson in the experience was the importance of patience:

“I’m not a patient person by nature. You must give the individual your total dedication and really listen – you can’t be on your phone when you’re together. You must see this as being beyond a professional relationship and connect as a human being. A mentee takes you into their trust circle, so you can’t break this trust. They can’t view you as yet another authority figure that is going to rap them over the knuckles.”

The relationship flourished throughout the year and Rivasha was thrilled when Palesa achieved a matric with distinctions and was accepted into university. She keeps in touch with her mentee, although meeting up in person during Covid-19 hasn’t been possible. 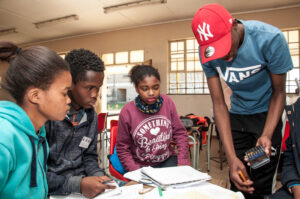 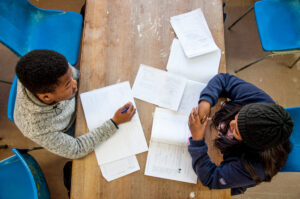 Coaching in the workplace
Rivasha’s training as a transformational life coach also pays dividends in the workplace. She spends about 10 hours a week mentoring her team and finds this practice to be worthwhile in terms of both performance and team cohesion.

She believes that the old control-and-command management style is being replaced by mentoring and coaching relationships. This new style doesn’t allow for micromanagement but is rather built on high trust relationships between employer and employee. “This is an incredibly positive change because you expose your people to new possibilities. They soon learn that they are able to accomplish more.”

While Rivasha recommends mentorship as being a worthwhile pursuit for mentors, she also cautions against being overly prescriptive. “My advice to anyone wanting to mentor is that it’s not about you. It is easy to give advice and tell people what to do. If you take this approach, your mentees will not learn anything. Great mentorship is where you help people to control their emotions and process their thoughts for themselves.”

Afgri is classified as an essential services business, which means that the firm kept operating through the highest lockdown levels. Most staff members worked from home and Rivasha notes that productivity remained high. One of the challenges was that staff members struggled with the ‘blurred lines’ that occurred when working from home and not knowing when to switch off. Here, much of Rivasha’s work has been to keep her team motivated and connected.

Rivasha joined Afgri and the agriculture industry in 2017 after several years in the food industry. After completing her articles of clerkship, Rivasha joined Meadow Feeds in June 2004 as a management accountant. Thereafter she fulfilled various senior finance positions at Nampak and Tega Industries. During 2016 she was appointed as financial director at DivFood, a Division of Nampak.

She joined Afgri in May 2017 as CFO looking after AFGRI Agri Services. These companies operate in South Afr ica and African countries. In February 2018 she was appointed as group CFO at Afgri Group Holdings.

*Not her real name