Brett Tromp, Discovery Health CFO, and his wife, CA Candice Tromp, help the Orient Hills Day Care in their personal capacity. Their support of the school is underscored by a deep understanding that for a nation to flourish, children need to learn through play from a very early age. Orient Hills Day Care provides that opportunity for 72 children.

On a narrow, insignificant road that leads from nowhere much to somewhere else lies the small Magaliesberg village or Orient Hills. In the village, poverty is high and employment rates are low, but for the families who live there, a vibrant and well-structured pre-school may just give their children the foundation they need to make something more of their lives.

The Orient Hills Day Care is a Play-with-a-Purpose school, and its presence in the village is made possible because of fundraising done by Brett Tromp and Candice together with the Project Orient team.

That first fundraiser brought in R113,000 for the school. “It really helped us to keep the school running. We decided that we couldn't just do it as a once off, so it became an annual fundraiser for us. ”

Establishing Project Orient
They have continued to run the project in their personal capacities - Candice is a CA herself, and she helps run the fund - and they actively and continuously fundraise among their friends and associates, to keep the school running from year to year.

They've brought in well over R1 million in the past six years. A fundraiser towards the end of 2018 alone brought in R250 000. Despite their effectiveness at fundraising, their model has some refinement tasks.

“We were originally asking people to sponsor a child for R360 per month, but that turned out to be just too much or a commitment for people. So two years ago, we reduced it to R120 per child per month, and we got more people involved. It worked brilliantly. This year we upped the sponsorship to R150 per child a month, and that response has been good, ”Candice explains.

Brett says that Candice deserves a lot of credit for the administration of the fundraising efforts. "But it's not just me," she points out. “There are two other ladies who help me - I help them, actually. We are a great team. Lauren is the organizer, I am the fundraiser and Janet is the creative person. ”

They provide sponsors with photos of the child that their money is supporting and regular updates at the school, which gives them a sense of actually helping an individual rather than an institution.

“We want people to feel that they are part of a longer-term vision, rather than just donating once-off because that doesn't make anything sustainable. This school doesn't have a revenue source other than people willing to partner with it in the long term, ”says Brett. 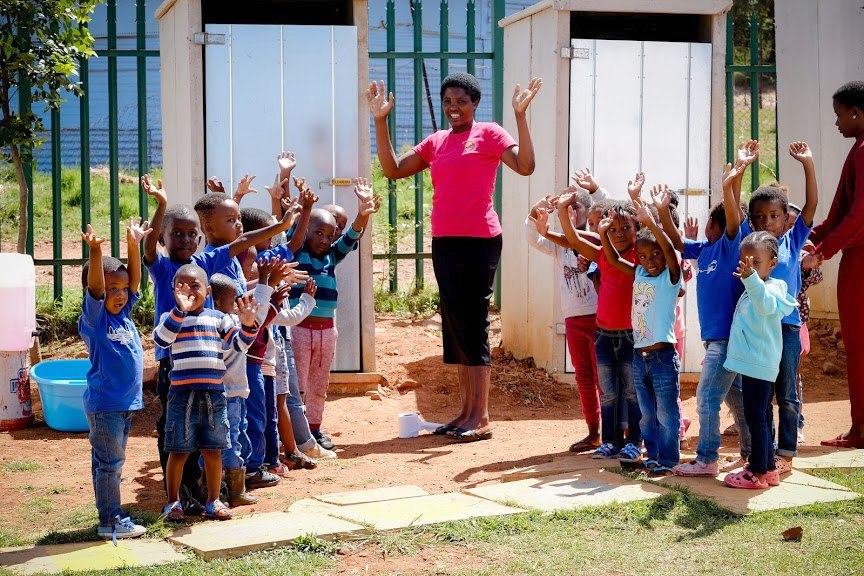 Why sponsor early childhood development?
Keeping a school like this running is no small feat, and over the years. The fruits of the Tromps' labor have been made manifest in a bright and happy learning environment for children from playgroup to Grade R. This isn't some shabby and tired space, but a well-considered school with quality learning aids and dedicated teachers.

This is the philosophy of the Play-with-a-Purpose education group. With funding, they establish schools in communities like Orient Hills, to deliver the children a quality preschool education that primes their minds, bodies and characters for the challenges and opportunities for later schooling.
Brett explains that various studies have shown that much of the groundwork for future learning success is laid at the formation phase between two and six years old. “Children that don't start learning and playing the right sort of games at those ages, just don't do as well later. So to make a real difference in South Africa, you have to start at grass roots. You can't just enter at any point. You have to build a foundation. "

Robyn Wienand, founder of Play with a Purpose, affirms the value of an intervention in early childhood. “If we reach these young children, they have a 70 percent less chance of committing a violent crime. There is a 30 percent higher return on investment if you reach a child at preschool age than if at primary school, high school or university level. That's a huge return. "

She adds that the impact on the economy can be measured and that children who have received a positive preschool intervention are less reliant on social grants.

Part of the school's philosophy is to ensure that the children have a nutritious meal every day to support healthy growth and learning. The school has a kitchen and employs a cook, who follows a meal plan that ensures they receive the correct mix of brain-growing nutrients and energy-giving foods. 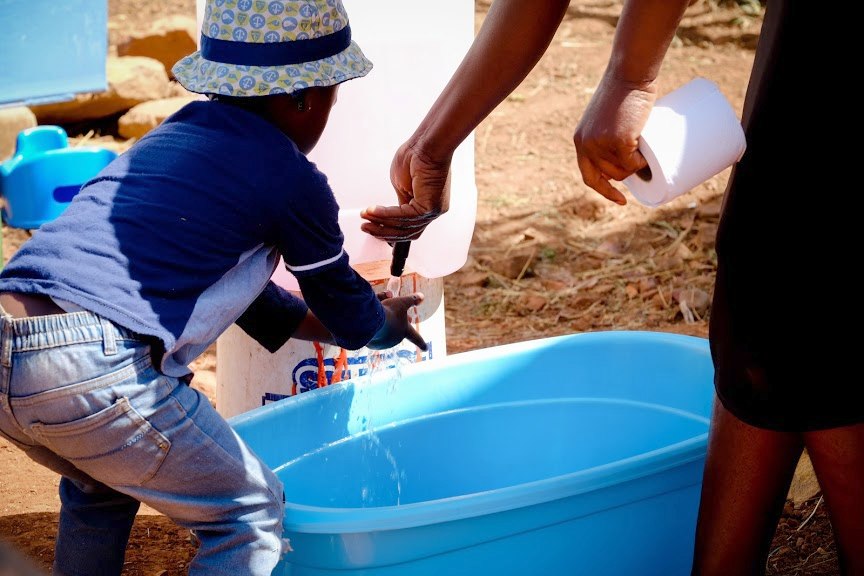 Contributing to building a nation
It’s clear that the school is a massive undertaking - and Brett and Candice support another one like it as well. Why would a CFO and his wife who works hard at raising their twin sons and daughters get involved not just in fund raising, but in ensuring that every aspect of the school has the funding and support it needs?

"It's a deep sense of the need for vitally important preschool education," says Brett. “There are these forgotten communities of people that literally have one tap for the whole community and no electricity. How do you get them to have a chance in life? Children are left at home with a caregiver, who is usually a grandmother. With schools like these, we can bridge the gap before they go into a government school for Grade 1. ”

The benefits are obvious in the joy and competence of the children at the school. They laugh and play and engage with their educational materials, happy to be learning and to have the opportunity to play safely in an open space. The advancement that they make is clear from the progression of the learning materials from the first year to the Grade R class. These children have received an early education in a loving environment and are more than ready to tackle the challenges that the world will throw at them.

And this, says Brett, is the point.

“I love South Africa deeply but the country has many weaknesses. I don't think you can live in a country like this without finding a way to serve. I want to make South Africa a better place. I have my personal beliefs as a Christian, which are deeply entrenched in our lives, but we're doing this because it just feels like the right thing to do. If you have abundance, you should be helping others. And a school like this makes it possible to truly make a difference to the future of these children, and, if we could get 100 of these schools up and running, we'd start to see a difference in the country. ” 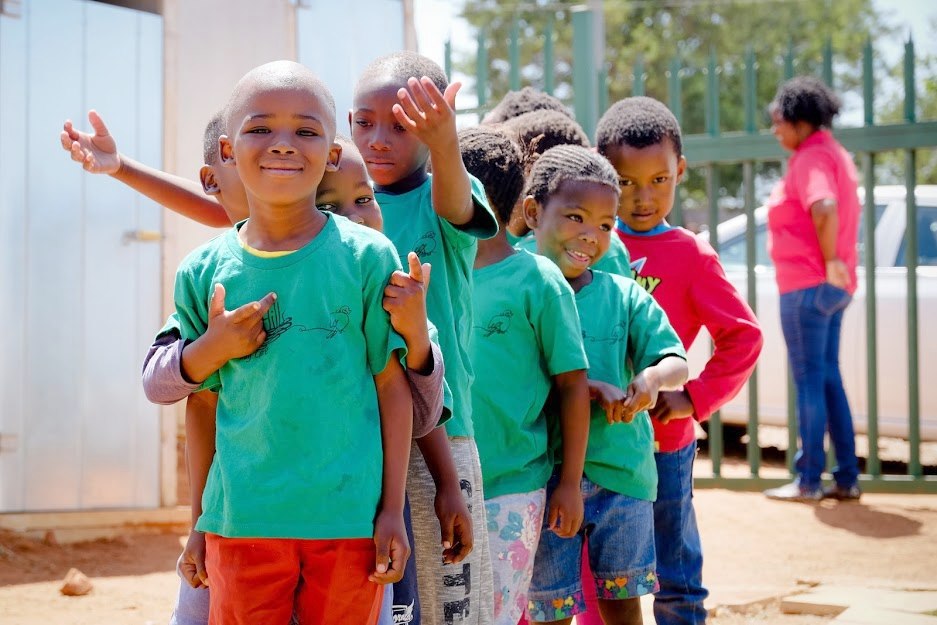 Find out more…
To learn more about Project Orient, the volunteers, staff, children and some of their most recent projects, you can visit their Facebook page .

Photographs of the children were published with the permission of their parents and the school.