PPC CFO Tryphosa Ramano supports the not-for-profit organisation Time for Change in her personal capacity. She says that it's important to give what she can to make an impact on someone else's life, because she has succeeded in life because her community supported and uplifted her.

Tryphosa Ramano, the CFO of PPC, producer of cement, lime and materials, attributes her career milestones and success in the finance world to the township of Mamelodi in South Africa’s capital of Pretoria.

After all, she’s had a high-flying career that many finance professionals could only dream of. In 2011, she was appointed as the first female CFO of PPC, a multinational business listed on the Johannesburg Stock Exchange, which operates in the construction industry that is still dominated by men in top echelons.

Women empowerment has always been Tryphosa’s passion and goal in the various roles she held before joining PPC, including being the financial director of Women Investment Portfolio Holdings and director of the Development Bank of South Africa – just to mention a few.

Her journey of building a finance career began with hardships during her formative years. Tryphosa was raised by her grandmother in Mamelodi because her biological mother gave birth to her when she was only 16 years old.

“Life was difficult because we didn’t have a lot of money at home and we struggled to even afford the basics of life to survive,” says Tryphosa.
Although her household didn’t have the financial means for a comfortable lifestyle, her grandmother ensured that Tryphosa and her siblings excelled at their education. The Mamelodi community, especially her teachers, also rallied around her, helping her to complete her education at Vlakfontein Secondary School.

In one of many examples, teachers at the school helped her apply for a government-subsidised loan – now known as the National Student Financial Aid Scheme – which allowed her to pursue and complete a B. Com in Accounting at the University of Cape Town in 1992. 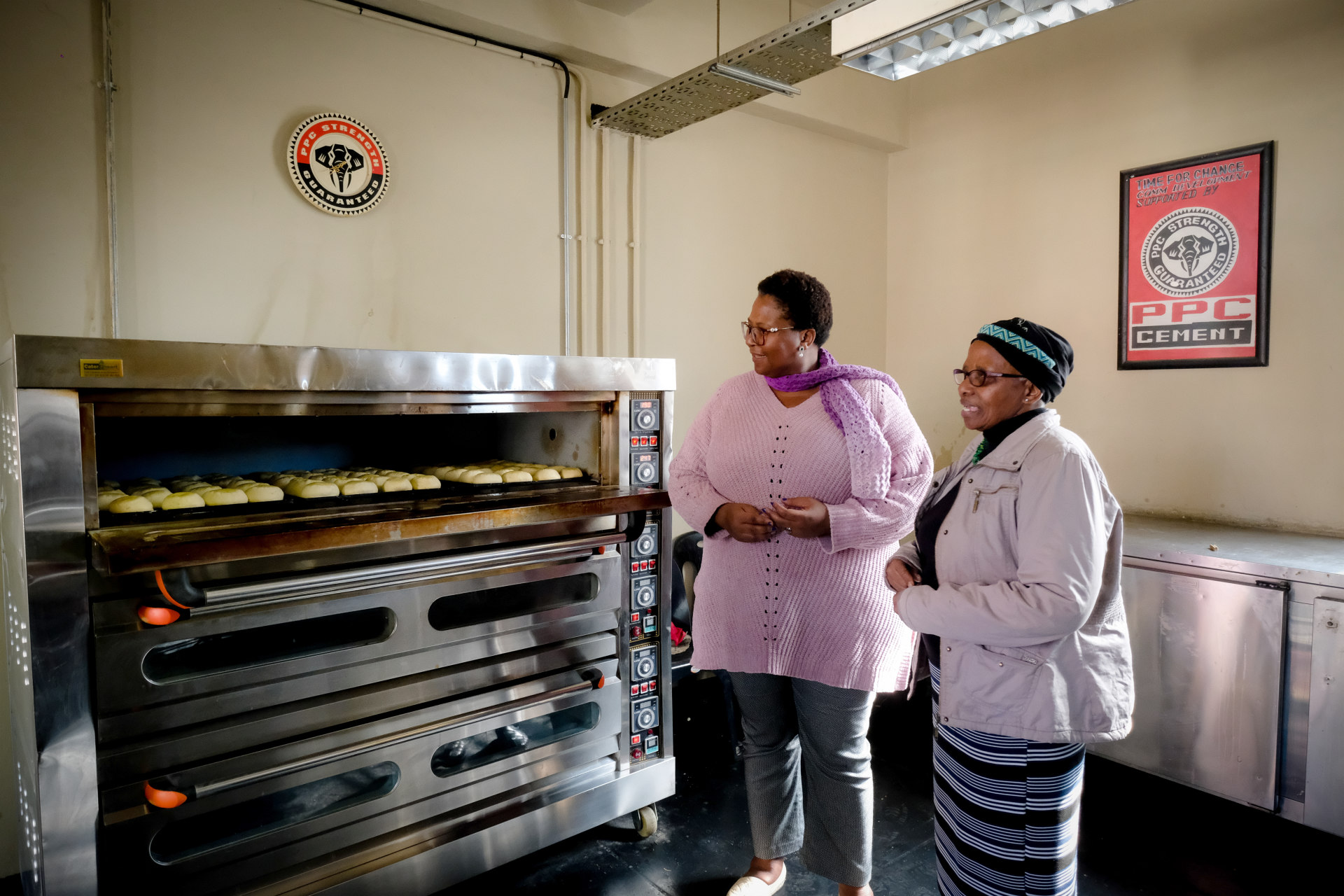 And more than 20 years later, Tryphosa believes in the philosophy of paying it forward by uplifting people born into disadvantaged circumstances. She fulfills this purpose by supporting not-for-profit organisations like Time for Change, which provides a refuge for homeless children and adults that are lured into the vicious world of commercial sex work.

Time for Change was founded in 2004 by Barbara Hill, a stalwart in the non-profit organisation industry that began outreach work in the 90s.  The organisation operates from the Drill Hall, a significant heritage site in Hillbrow near the bustling Noord Street taxi rank in Johannesburg.  The Drill Hall was a venue where the initial stages of the Treason Trial were held between 1956 and 1957 – in which 156 anti-apartheid activists, including Nelson Mandela, were charged with high treason.

Today, Hillbrow is at the forefront of the country’s social challenges: there are high incidences of unemployment, refugee influx, HIV/Aids, woman abuse, degradation of urban environments, drug dealing, crime, and prostitution.

It was the latter problem that prompted Barbara to start Time for Change, which initially operated from her apartment in Yeoville in 2004.  At the time, she took in two girls, aged 13 and 14 years, after discovering that her neighbours in the apartment building were using them as commercial sex workers.

Using her personal savings, she founded Time for Change, which rehabilitates sex workers so that they gain vocational training and employment. The organisation also provides former sex workers with temporary housing at the Drill House.

She first established a bakery where former sex workers would bake scones that would be sold in the streets of Hillbrow to raise funds that cover the day-to-day runnings of Time for Change.

The bakery was so successful that Barbara was able to expand Time for Change’s programmes to include educational support and vocational training to sex workers and street children. Barbara teaches them how to sew to make bags and clothes, which are sold to financially support the organisation. They are also trained on how to use a computer, which is critical to finding gainful employment.

Enter Tryphosa
Since Time for Change opened its doors, Barbara estimates that she has rehabilitated a total of 2,111 children and adult sex workers.
In achieving this feat, Barbara says it wouldn’t be possible without Tryphosa’s unwavering support.  “She has supported us even in the darkest moments when we didn’t have money to run the organisation,” she adds.

Barbara and Tryphosa initially met in 2012 when PPC awarded Time for Change a donation of R50,000, which went into buying sewing machines, groceries and baking equipment for the organisation’s bakery. Tryphosa’s support of Time for Change goes beyond PPC structures as she donates her own money and other resources to the organisation.

Barbara recalls how Thembi*, who was rescued from the streets by Time for Change, wanted to register for an accounting degree at the University of Johannesburg (UJ) in 2016 after passing matric with flying colours. She couldn’t register because Time for Change didn’t have the required R5,000 registration fee.

Barbara didn’t tell Tryphosa about the conundrum or ask her for money. But Tryphosa surprised Barbara by transferring the required money into her account. “When Tryphosa gave us the money, it was like heaven. Finally, she could go to school to improve her life instead of continuing to sell scones on the streets.” Thembi has since graduated from UJ and works for a national government department.

When Tryphosa has family occasions, she orders Barbara’s fluffy and delicious scones and other baked goods. Disclaimer: CFO South Africa tasted the scones and they are delicious.

Underscoring their close relationship is that Barbara designed and baked Tryphosa’s wedding cake in 2015. Tryphosa says her support of Time for Change as a patron helps the organisation to sustain itself, instead of relying on handouts.

To further support the organisation, Tryphosa uses her vast network in the finance industry to promote and encourage support for Time for Change.

She constantly asks her colleagues at PPC’s head offices in Sandton to donate their old clothes, which are handed to Time for Change. This endeavour makes a huge impact especially during Christmas, when children at the organisation expect new clothes to celebrate the holiday season. She also partnered with some of her industry peers at Nedbank to collect 40 blankets, a portion of which were distributed to Time for Change.

At Time for Change’s premises, there is a sewing room where reusable shopping and laptop bags are made using PPC cement packaging that is donated by the company. When PPC has corporate events, the company buys the bags in bulk – money which goes towards sustaining Time for Change.

Tryphosa takes this PPC-Time for Change relationship further. Beyond PPC, she was the president of the African Women Chartered Accountants from 2016 to 2017 and president of the Association of Black Securities and Investment Professionals from 2011 to 2015.  Whenever these industry bodies host annual conferences, Tryphosa ropes in Barbara and Time for Change to design and sew bags that can be used by delegates to hold conference materials. She sometimes uses her own money to order bags – in large volumes of between 150 to 400 bags – for conferences she is involved in.

Asked by CFO South Africa about why she gives back to the community, Tryphosa says it is in her DNA.

“I am very passionate about social development because some of us come from tough environments. Somebody saw the opportunity in me and provided me with an opportunity. I am where I am because of the Mamelodi community that uplifted me. My motto in life is that whatever I have, I need to give it away and make an impact on someone’s life.”

Support Time for Change
For more information about how you can get involved with the incredible work being done by Time for Change, contact Barbara Hill on + 27 78 720 1361.

*Thembi is not her real name.