On the evening of 25 November, the seventh annual CFO Awards took place at the Inanda Club, Sandton, Johannesburg. South Africa's top CFOs were nominated for recognition at the awards, which were postponed due to Covid-19 restrictions, and the winners were announced at the rescheduled 'Oscars of finance’.

In keeping with the night’s theme of “world-class finance in action”, futurist Craig Wing presented the keynote address on how world-class organisations are preparing for a technology-enabled future. Craig is a global speaker, futurist and business strategist at Futureworld.

As a futurist, Craig explained that he can’t predict the what’s coming but rather paint a number of scenarios. “I can’t tell you what the future holds, but rather help you think about several potential futures. Just because you are successful now, doesn’t mean that you will be successful tomorrow. When thinking about the future, its more important to be imaginative than to be right.” 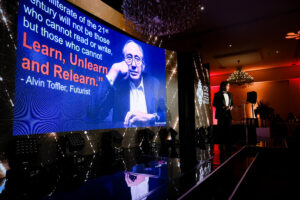 The crux of the keynote titled ‘Stepping into the unknown’ was that business should be looking to understand and leverage the fourth industrial revolution to flourish and become more customer centric.

Highlighting the importance of adaptability, Craig opened the talk with a quote from futurist and author Alvin Toffler: "The illiterate of the 21st century are not those that cannot read or write, but those that cannot learn, unlearn and relearn."

“The fourth industrial revolution is used as a catch-all phrase for everything to do with technology. It’s much more than that. Its also about innovative new business models. This involves exponential experience and the sharing and circular economy. It involves things like putting the customer first, moving beyond capitalism towards the humanness of the business,” he added.

Wing highlighted several organisations that are using technology for their benefit. For example, beggars in China use WeChat Pay to receive donations, the Roman Catholic Church has developed a confessions app and contactless payments for tithes are being used by the Church of England. “These are very straightforward solutions, but they put the customer first to create a seamless user experience,” said Craig.

He referred to ‘singles day’ marked in China each 11 November (11.11), an initiative spearheaded by Jack Ma, the founder of e-commerce giant Alibaba. The day is meant for single people and is based on the same gift-exchange notion of Valentine's Day, but rather singles are encouraged to buy something for themselves.

Wing explained, “They said 'wait till the eleventh of November and don't worry about the fourteenth of February because you are single, no one is going to buy you anything....but on the eleventh of November, buy something for yourself'. So, the Chinese did. They bought $74.1 billion worth of sales – equivalent to 20 percent of South Africa’s annual GDP. Alibaba processed 260,000 payments a second and financed the purchases of luxury goods including Ferraris and Maseratis.

Craig says we are yet to see the true impact of technology suggesting artificial intelligence (AI) will have a more profound impact on humanity than the discovery of fire. Now, most AI applications are defined a ‘narrow AI’ with limited capacity. In the future, AI will evolve into ‘general AI’ where the machine can understand context, right through to Super AI, which would be unthinkably intelligent and able. Experts predict that this transition could take anything between five to ten years and perhaps longer.

Craig paints a bleak outlook for humanity should business leaders use technology as a tool to slash staff numbers. He points to World Economic Forum (WEF) predictions that up to 60 percent of the global workforce could be replaced by technological applications. Jobs that do not require compassion will be the first to go.

“With an official unemployment rate of 30 percent, South African business leaders must think very carefully about using emerging technologies in the workplace. We cannot be blinded by the cost-saving appeal of replacing human labour with machines. We are not Japan where they believe that if the work can be done by a machine, it is disrespectful to give it to a human,” he added.

He argues that we need to supplement the current focus on STEM (Science Technology Engineering and Maths) with HECCI which stands for HECCI Humanity, Ethics, Compassion, Creativity, Imagination.

The CFOs in attendance were rapt as Craig delivered his rapid-fire presentation. While the aim of the evening was fun and celebration, it’s clear that the audience came away with something to think about as well.