After Sasol CFO Bongani Nqwababa had given an impressive and well-received talk about his tenure at Anglo American Platinum during the Stategy Execution round table discussion at the 2015 CFO Awards, he told me he doesn't like to speak off-the-cuff. "As an accountant I am rather big on structure and order," he had already explained during the interview with the panel of awards judges. "When you talk, you can’t do that in free-flow without using key messages and without knowing what you want from a meeting."

It typifies the extreme professional that Nqwababa is and it explains his success at Eskom (back in the days...), Amplats and Shell. In probably the most challenging environment for a South African CFO, platinum mining, the Zimbabwe- and UK-educated Nqwababa managed to settle extreme wage demands, initiate a crucial restructuring and centralise the Finance department. No wonder the panel of judges was impressed with his work and voted for him to win the 2015 Finance Transformation Award.

Based on the interview with the 2015 panel of judges, the following summary of Nqwababa's work was included in the CFO Awards program booklet:

The new Sasol CFO was in charge of dealing with the 5-month long mining strike at Amplats, settled the wage demands between 7 and 10 percent and learnt "never to delegate engagement with employees to the unions". He also spearheaded the subsequent decision to close mines and "work with fewer people, of whom more are local, better educated and higher paid". Delivering on promises and developing people are part of Nqwababa's recipe for success and he doesn't like surprises ("even positive ones"), finds that "a crisis can be the best time to drive change" and has discovered that slower finance transformation can be more effective. 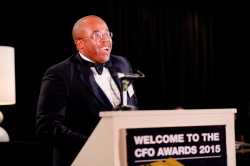 That last comment refers to Nqwababa's drive to centralise its 28 accounting teams that were scattered over the country, operating from individual mines. Eventually the CFO not to create 1 hub at once, but work with 4 hubs first, so the organisation could get used to it. "You cannot change faster than your culture allows, otherwise you flounder," he told the judges. "Sometimes you need to be slower to be more effective."

Rhett has served in various finance roles at King Price since its launch in 2012.