Far from slowing down now that retirement age is looming, Osman Arbee is about to enjoy a serious promotion. The CFO of Imperial Holdings will become CEO of Imperial Motors in January, and will hold both posts simultaneously for three months while he grooms the next CFO to replace him. “It’s not a bad way to finish off your career, running a big business for three to four years then retiring,” he says. “It’s a nice change at the right time of my life, working with people I enjoy working with in a business I know and enjoy. It’s an opportunity to use my brain in another way.”

Imperial Motors has a turnover of R70 billion and an operating profit of R3.5 billion. It has operations across Africa, the UK, Germany and Australia and deals with vehicle suppliers in France, Korea, Japan, China and India. At 57, Osman hasn't considered early retirement. "I enjoy good health, I've got good family support and enjoy travelling, so there's no need for me to stay at home and be a pain in the backside."

Acknowledgement
Far from being a pain, Osman is a very chatty, open and amusing person, happy to share the credit for his successes, of which there have been many. He's been such a huge asset to the Imperial Group that he earned two triumphs at the annual CFO Awards on 12 May 2016 - the Strategy Execution Award and the High Performance Team Award. He was very chuffed to win, he says. "I just do my job to the best of my ability, so it's nice to be recognised by people in your industry. As you go up the hierarchy people don't say thank you or well done, so I appreciate that acknowledgement from my colleagues."

Winning the High Performance Team Award came because he inherited good people in the group and was able to exploit their abilities, he says, adding that the chartered accountants he works with have the innate skills, so success depends on how well you use them. "My skills are nothing - I take their skills, exploit them, give them leadership and guidance and empower them and let them feel like they made the decisions. Then one plus one will make three."

That's dreadful maths for an accountant, we joke, but it underlines his expertise in developing his people by providing proper leadership and guidance.

Change your life
His own story was fuelled by the ambition to escape to a better life. "When you're a youngster growing up in Dullstroom if you don't get an education you're going to be stuck behind a shop counter for the rest of your life," he says. As a coloured child he couldn't attend the local primary school, so he travelled to a school in Belfast every Monday morning and caught the bus back home on Fridays. He enjoyed maths and accounting lessons and saw it as an exit strategy. "It wasn't the money that drove me at that stage - you just want to change your life."

Osman was one of nine children and was the first person in the family to study. He spent 23 years in accounting at Deloitte, where one of his strengths became mentoring and empowering other youngsters who were also trying to rise above their circumstances. Deloitte absorbed 80 to 100 new graduates every year and Osman helped to mould the skills and develop the careers of those for whom he was responsible.

He left Deloitte 12 years ago when a lot of accounting rules and regulations were changing. "I thought: I'm an entrepreneur at heart, do I want to get back into accounting standards and learn different things? I wanted an environment where I'd still fulfill my ambitions, but in a different way." 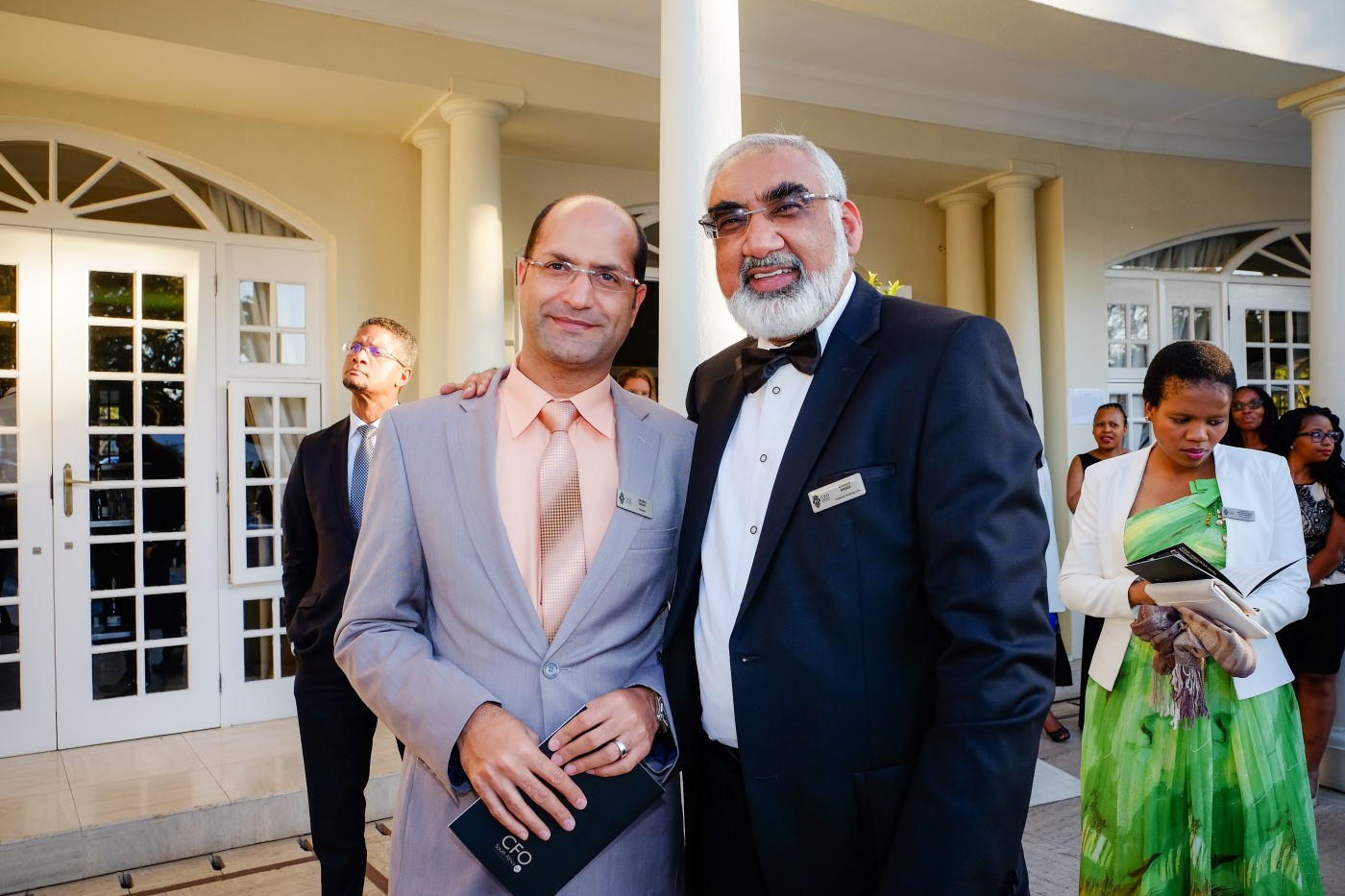 He had private school fees to pay for his three children (his son later died in a car crash aged 18) and realised if he was going to make a change, it had to be then. "I was worried about approaching 50 and I had to make a call," he says.

The opportunity came when Imperial Holdings asked him to recommend a smart black chartered accountant to run its charitable arm, the Ukhamba Community Trust, which benefited 15,000 black employees. Osman asked if he wasn't black enough to take the job himself, and they told him he was overpaid and overqualified. "I said I'm not greedy, make me a decent offer I can't refuse," he laughs. The offer was presented a week later on an informal piece of paper with four bullet points on it. "I left a 23-year career for a job with four bullet points," he jokes.

Osman on his recipe for success: "Things don't happen in isolation. You're only as good as your people and there are a lot of unsung heroes. I have a strong wife and independent daughters, a very good PA and good CFOs in the divisions. They make me successful. The way I talk to the CFOs of the business and stimulate them to challenge their CEOs is also important. Problems are not that big when you break them up. My philosophy is that when someone walks out of my office, he or she thinks he or she has solved the problem. I don't need credit for it."

Responsible CFOs
At Imperial he soon joined the executive committee, and within a year his boss realised that his talents were being wasted and gave him the additional task of helping to grow the car rental business. When the CEO of that division retired Osman took over, and later he became the CFO of Imperial Holdings.

One of the huge impacts he has had, has been to sharpen the other CFOs within the group into taking more responsibility for the corporate strategies. He's adamant that CFOs must do more than count the numbers, and he's written a training document to turn bean counters into strategic partners to the CEO. They must work with all the different operating units to come up with practical solutions for the business, he says. "That wasn't a culture that was familiar in Imperial, but if all you're going to do is count money then I'll pay someone half your salary to do it," he says. "You have to give CEOs the best information to make decisions, then you've achieved your job. CEOs are quite lonely and they don't have all the information, so you have to provide them with that so they make the right decision."

Osman on hedging: "The weak rand is a big issue, as we import 75,000 vehicles every year and you cannot pass on a 25% increase to the customer. We decided to enhance the group asset-liability committee (ALCO) by setting up an International ALCO, Africa ALCO and SA Hedging Group. The International ALCO will manage and control funding and banking requirements of the international businesses based in the UK, Australia and the European businesses. The Africa ALCO will manage the funding and currency risks in the 23 African countries we operate in outside South Africa. The SA Hedging Group aims to better manage the group's hedging policies for SA Imports, reduce risks and forward cover costs, and protect profitability by locking in better hedging rates."

For a potential acquisition, for example, the CFO must do the research to figure out if it fits the strategy, if they have the cash to pay for it and if the acquisition will make money. "Accountants are historians; we tell you what the numbers did in the last six months but the CEO needs to know where you will be in the next six months. We have to give them the information that makes the CEO look good. So that's the philosophy I instilled in these people. We were historians and I made them partners to the CEO."

Now he's moving back into a CEO role himself, so he'll be able to test how effective his influence has been by whether the CFOs below him provide him with all the relevant information to make better decisions.

Think differently
He sees himself stepping down when he's 61 or 62, a few years ahead of the official retirement age. "In a business like this the environment is changing so much in terms of technology, and our customers are no longer 40 or 50, they're 30 and 40 and their buying patterns are different," he says. A company now needs the fine balance between experience and the input of younger people who understand the new generation of customers.

In the past, a customer would walk into a car showroom and the salesman would give them advice on the most suitable vehicle. Now people Google everything and come in knowing exactly what they want and what colour they want it in, making the employees order-takers rather than salesman. "The way we sold cars 20 years ago isn't the same now and won't be the same in 10 years. You have to reinvent yourself and employ people who are IT savvy and think differently," Osman says.

The downside is that many youngsters come with an attitude of asking what the company can do for them, rather than what they can do for the company. That's where his mentoring and guidance will come in handy again. "You have to sit them down, develop them and exploit their potential. Common sense isn't always common today - they are so tuned in to information but you have to help make them practical. Sometimes they're not as street-wise as we were because they have knowledge and a lot more money than we had."

Osman on giving back: "Alongside the employee trust, we have also formed the Imperial & Ukhamba Community Trust, of which I am a Trustee. It is set up to help with the education of previously disadvantaged children by improving schools in the south of Johannesburg. Today we manage 17 libraries impacting 18,500 learners. By December 2016 we will have 20 libraries impacting 21,000 leaners. This costs the group about R10 million per year and we employ 50 people who were previously unemployed. In addition, the group has set up 25 clinics, all over Gauteng in containers that cost R450,000 per container. We recruit nurses and receive a monthly fee to cover initial costs and in five years these clinics belong to the nurses. There is a desperate shortage of health facilities in the townships and these clinics are well located and the close access saves transport costs. The qualified nurses see up to 100 patients a day and dispense up to schedule four drugs."