In the face of waning economic growth, countercyclical fiscal policies are only viable in countries which boast low levels of public debt like Botswana. In this third part of RMB's Africa outlook 2016, authors Celeste Fauconnier, Nema Ramkhelawan-Bhana and Neville Mandimika look at the fiscal policy across the continent and the tax potential across Sub-Saharan Africa (SSA).

Surviving fiscal slippage
Fiscal deficits remain a source of vulnerability for our core economies, particularly those where external financing needs are in excess of 10% of GDP, as is evident in Ghana, Kenya and Tanzania. State budgets risk being overextended due to expeditious growth in recurrent spending at the expense of capital development.

In the face of waning economic growth, countercyclical fiscal policies are only viable in countries which boast low levels of public debt like Botswana. For most, medium-term expenditure frameworks are likely to be re-mastered to ensure that development needs are balanced against rising debt.

Sustained fiscal indiscipline paired with currency weakness will render fiscal policy inflexible in the event of an exogenous shock. Economies plagued by bloated wage bills, subsidies and/or contingent government liabilities will have to contend with mounting fiscal pressures, which might necessitate sharp and disorderly adjustments.
Weaker growth prospects in more developed economies could erode tax revenues, thereby slowing efforts to reduce budget deficits. Revenue growth is limited in resource-rich economies, implying greater shortfalls in budget financing. Despite an expected modest upturn in commodities in 2017, the mobilisation of revenues accruing from the sale of primary commodities will be slow, increasing the burden on domestic taxation.

According to the IMF, as more SSA countries reach middle-income status, their potential for higher tax revenue expands. Its study shows that South Africa, Angola and Nigeria have the most potential in terms of increasing their revenue mobilisation (Figure 4). Despite reforms beginning to take hold in many countries, progress in strengthening public financial management and the domestic tax base will remain measured, restraining domestic revenue growth. 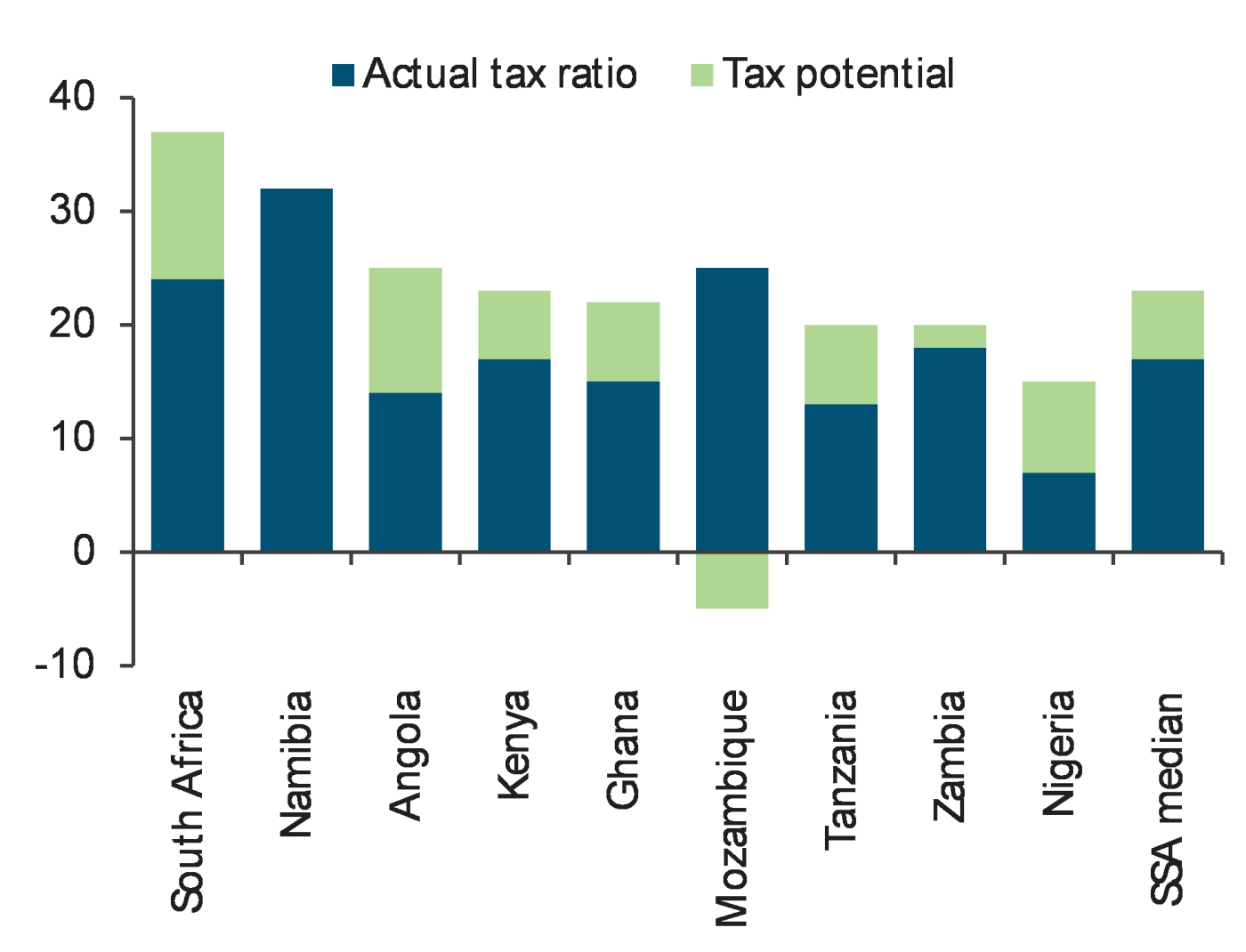 Note:
The actual tax ratio corresponds to the 2014 tax-to-GDP ratio for oil importers, and to the non-oil-tax-revenue-to-non-oil-GDP ratio for oil-exporting countries. A negative tax potential does not necessarily indicate that there is no room for revenue mobilisation in a given country. (Source: IMF, RMB Global Markets. Data as at January 2016).