Travis Fisher is not your typical accountant – he’s also a professional waterskier.

SAPRO senior audit consultant Travis Fisher was introduced to open water by his father, who a was keen sailor and windsurfer. He recalls spending his holidays as a youngster at their family home near the dam, learning how to waterski.

“My father skied as well, but my grandfather was quite involved in waterskiing in South Africa and when my father bought a boat, we would go to Albert Falls dam in Pietermaritzburg every school holiday and spent a lot of time on the water,” he says.

Not short of sporting talent, Travis was also a reasonable tennis player and competed in KZN school tennis, but he eventually had to pick between playing tennis and skiing.

Travis is the recent winner of the GoPro 2020 Million Dollar Challenge, a competition that invites creators from around the world to submit unedited content showcasing their skills and that highlights the capabilities of the GoPro camera. However, this isn’t Travis’s biggest achievement to date, as he is the current 2021 South African National Champion in waterskiing.

“The competition took place in March this year and then in April I also tied the South African National Record and at the moment, I am a co-record holder in slalom waterskiing division in the SA Men’s Open category,” he says. This particular achievement was his biggest one yet, he explains, as he was studying to become a CA while training to beat the record at the same time.

Beating the record at the time seemed impossible for Travis as he was stuck at one score for a long time. “But when Covid-19 hit last year, it gave me a great opportunity to train and spend lot of time at the dam, while working remotely.” 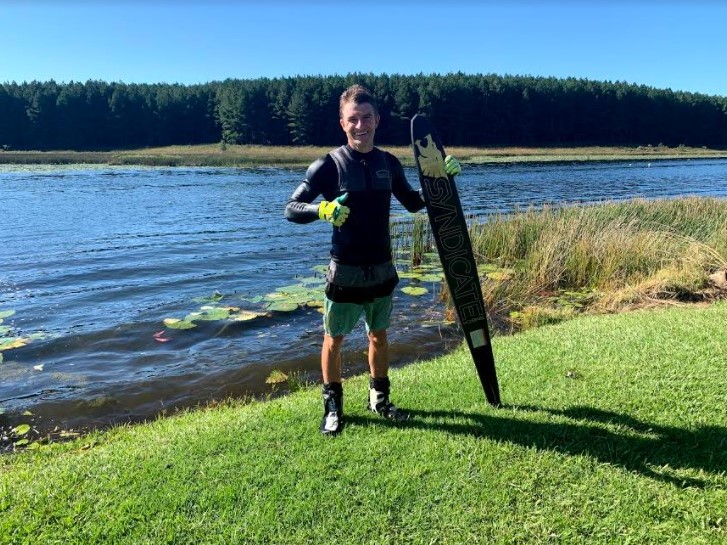 Being very involved in waterskiing never interfered with Travis’s studies, in fact he thought it a great outlet to take a break from them. He says that it also goes to show that if someone is good athlete and wants to become a CA, it takes a certain level of discipline and motivation, and that the two complement each other.
“You’re not just going to become a CA by just sitting at home and doing nothing, you have to apply your mind, study hard and apply the same level of dedication to waterskiing.”

Travis has always been good at balancing the two disciplines as he also competed in the World U21 Waterskiing Championship in the US during his matric trial exams and managed to do both successfully.

Travis is also into his tech and when he’s not spending time on the water, he enjoys building websites. Travis even helped his father build the website for his online business, Doors Director, a business that sells wooden doors and window frames. While assisting his father, Travis was bitten by the entrepreneurial bug and would like to go the e-commerce route.

Travis is currently flying the South African flag high in Florida in the US for a few months, training to compete in the World Waterskiing Championships taking place in October.

He says he’s found a way to balance pursuing your passion and having a professional career, and he would like to encourage other young people who are torn between doing two things they love at the same time to go for it and know that it is possible.

“Never stop believing: a lot of the time, people are given a list of reasons why they can't do something, and I've always been a doer. Whatever you want to do, just set your mind to it and go for it; I even figured out a way to be in the United States right now, during these difficult times.

“Becoming a CA was also not an easy journey: you will have dark days, but it is critical to never give up and keep the end goal in mind,” he says.

Special feature (Part five): Blockchain – Time to jump in or wait and see?

Ian Putter reveals that the blockchain swell is getting bigger, with Standard Bank and Deloitte getting involved.