He sure doesn't choose the easiest CFO roles, does Bongani Nqwababa. After a career at firms like Shell Southern Africa, Eskom and Anglo American Platinum (Amplats), he is currently tasked with navigating national pride Sasol through a tricky period of low oil prices. Luckily, Bongani has earned his striped as crisis manager par excellence at Amplats, where his calm head was crucial in times of strikes. The new strategy he plotted recently saw Amplats selling off its Rustenburg mines to Sibanye, but Nqwababa has already moved on to other challenges.

During our June 2015 event Bongani was the key note speaker, sharing his view on the pillars of the CFO as business partner. In this exclusive interview Bongani, who won this year’s Finance Transformation award at the annual CFO Awards, reflects on the CFO role, the interaction with the CEO and what it takes to be successful. He also elaborates on the lessons he's learnt during the trying times at Amplats.

What do you like about being a CFO?
“I have been in CFO roles since 2002, which has meant being at the core of the business performance and having to keep up-to-date with continuously changing requirements. There is always something new, which keeps me refreshed. I like being a business partner, not only to the CEO but also to Exco colleagues and the Board. The role of the CFO is converting strategy statements into value and deal with a multiplicity of internal and external stakeholders. Contrary to the image of the CFO role, I am yet to have a boring day.”

You played a crucial rule for Amplats during the 2014 Amcu strike – how did you approach that?
“I was made crisis manager during the Amcu strike in the platinum sector. That was tough, because you deal with an explosive situation. For 5 long months we had a daily crisis meeting at 8am in the morning, sometimes also on the weekends. From a Finance point of view it was all aimed at reaching a sustainable settlement.”

"Never delegate engagement with employees to the unions."

“We had already anticipated that the new union would be more aggressive. That is why we followed the Margaret Thatcher strategy – (not that I am an admirer of hers) – of increasing inventory. For key parts of the business we also improved relationships with employees, communities and other unions. We also improved our security. As a result, in those 5 months, not a single customer got an ounce less platinum. We also managed to settle the wage demands, which started as a demand for a 100 percent salary increase, for an increase of between 7 and 10 percent.” 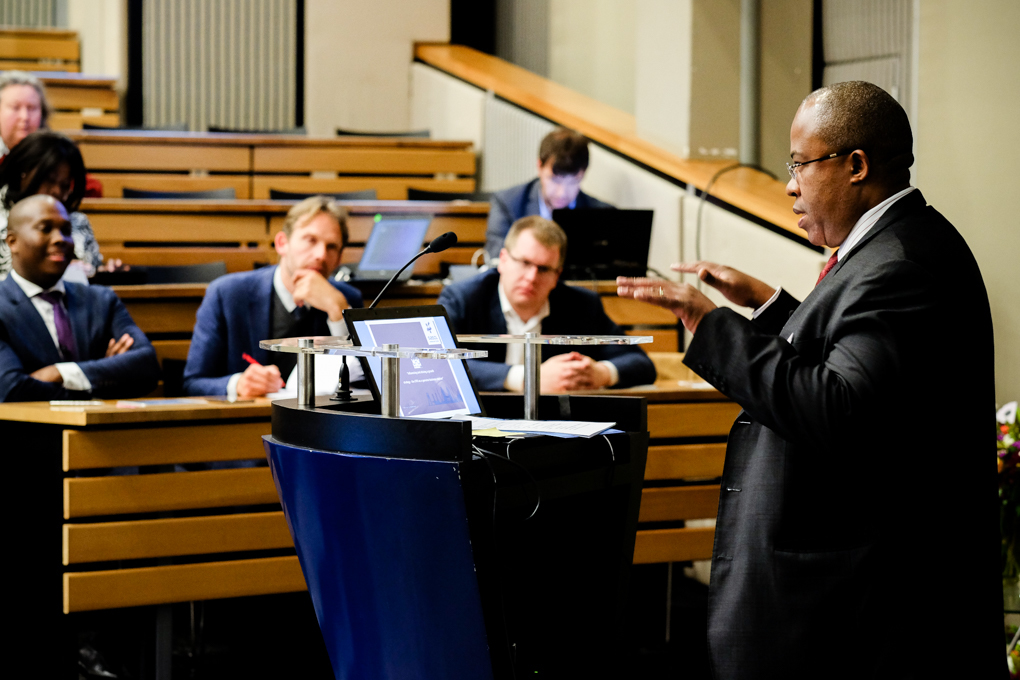 What did you learn from the mining strike?
“The key learning for me was never to delegate engagement with employees to the unions, but keep in touch with yourself. As executives you need to smell and breathe the same air as your employees. Another thing is that you need to be resolute during a crisis, which suits me because I don’t get flustered very easily.”

“People tell me I have a knack for ending up with difficult jobs. Now the oil price has crashed, I am starting at Sasol… But a crisis can be the best time to drive changes in an organisation.”

What does it take to be a successful CFO?
“It starts and ends with having exceptional and engaged people. I said it internally as well as when I arrived at Sasol: I said to my team: you can copy strategies, you can copy processes, you can copy structures, but you cannot copy people in ability and behaviour. They provide the sustainable competitive edge.”

“Another important thing is delivering on promises. If it cannot be done in time, I tell the Board and colleagues straight away. People know me. I don’t like surprises, even positive ones. You also need clarity of strategy and clarity of decisions. After a decision, I like to emphasise what things are, but also what they are not. There can’t be any ambiguity.”

“People should be developed, in terms of technical skills, but also in business skills. At Amplats we did a gap analysis of the supervisory and management staff. What came out of that process was that managing conflicts, influencing and building relationships were the hardest things for them. So instead of sending them for IFRS training or something like that, the focus was on training that developed softer skills and we could see the team becoming more effective as a result.”

What should the CFO’s relationship with the CEO look like?
“The CFO needs to be a trusted business partner or wingman, as the Amplats CEO used to call me. You need to support and not second guess each other. I work on building relationships with the CEO, but also with other colleagues. That means that when I raise difficult issues, it is because of the issues and not for any other reason. That is important. For example, when discussing the effects of the low oil price at Sasol, the discussion should not only be about deferring projects but also about taking projects off the table. Some of those might be pet projects of individuals in the company, so it is important they understand you talk about the issues – and not about the people.”

“If there is an issue, I give a heads up in advance to the person, so that when I raise it in a meeting they are not surprised. I had to explain that style here at Sasol on arrival, because some people thought I wasn’t dealing with difficult issues in my previous role. I am not sure if it is a cultural thing, but putting down people in public is not my style. I was misunderstood by my direct reports, but I don’t want drama for the gallery, even if there is some behind the scenes. Now they understand me.”

“Agreeing on corporate messages with the CEO is also important. As an accountant, I am rather big on structure and order. When you talk, you can’t do that in free-flow without using key messages and without knowing what you want from a meeting. When we are asked about our response to the low oil price, for example, we should mention all the levers and give specific examples.”

What was your role?
“Although I think strategy should sit with the CEO, strategy sat in my portfolio at Amplats. Luckily the CEO was also a details person. We didn’t want our strategy to be based on who shouts the loudest or who has pet projects. I lead a process in which we developed scenarios ranging from status quo to only open cast mining. We settled on a hybrid model with more mechanized, less more highly paid skilled staff largely from the local community.”

“A lot of people had opinions so I said ‘none of this nonsense of having spectators’. We created strategic working groups in which people could give their views. That then led to an integrated view for everyone to stand behind.”

Not long after the strike, Amplats announced a big scale-down of operations (and after this interview the sale of the Rustenburg mines was announced, JR). What was the rationale behind that?
“As much as the platinum price had come down, we needed a prognosis. To invest and run a mine is a 50 years decision. You can’t make long-term decisions based on a temporary aberration. We did an analysis to find out if the downturn was a cyclical or structural issue. The conclusion was that it is more structural, due to the increased influence of recycling. Our cost was going up by 14 percent while our revenue only went up by 7 percent and labour was becoming more militant and less productive. The business was being squeezed, while stakeholders wanted more from it. In the olden days the trick used to be to mine more to reduce unit costs and get out of trouble, be we decided that value needed to be the focus.”

“We decided to exit a lot of underground mines and move to higher grade mines – more open cast and less labour intensive. That would give us a more valuable company and we would be able to afford the salary expectations. It would also deal with the emotive issue of migrant labour. In the new structure we would work with fewer people, of whom more are local, better educated and higher paid. That decreases the chance of strikes, as we had seen at our open cast mine, where people weren’t striking during the big mining strike.”

How did the dramatic changes impact the Finance team?
“I reduced 28 finance teams back to 4 by creating hubs. If they had tasks in common, like transactional processing or capex accounting, that would be centralised in the hubs. But the key decision support people would stay at the operations. We managed to reduce headcount by 28 percent this way, because, as an example, you only need 5 capex accountants, not 20.”

"Sometimes you need to be slower to be more effective.”

“I wanted to go full monty and establish one finance team. The head count reduction could have been 40 percent. I think this is something the company might still consider in the next 18 months. But you cannot change faster than your culture allows, otherwise you flounder. Sometimes you need to be slower to be more effective.”

Did this improve the quality of the Finance team?
“Yes, most people were reporting numbers like ‘production at this operation is up by 20 percent’. But I didn’t want that, because I also have a calculator. I wanted to know WHY it went up by 20 percent. That question forces the finance people to understand the business better. This has improved, but needs further improvement. Bringing Finance into one hub will also be an improvement.”

“The reality was 90 percent data reporting and 10 percent analysis. Now it is 70 percent reporting and the quality of the business reporting is getting much better. That also improves the credibility of Finance, which means Finance gets invited to the table. The true test of whether a finance team adds value is: are you invited to meetings or do you force your way to the table?”