Risk in Africa - an Expert Insight by Dianna Games

African stalwart and Shoprite chief executive Whitey Basson is well known for looking on the bright side of risk in African markets. The tougher the country, the less competition there is likely to be, he maintains. He has benefited not just from early mover advantage in Africa, where the company is the market leader by far, but by leaving nothing to chance.

The Cape Town-based company continues to refine its strategies to counter challenges and take advantage of opportunities. It is also quick to learn from its mistakes. Importantly, Basson leads from the front, visiting stores across the continent as often as possible rather than relying solely on boardroom strategy and managers in distant locations.

Shoprite is one of many successful companies that are doing good business on a continent investors abroad, and even those in South Africa, regarded even a decade ago as being too high risk to bother with. But as the perception of risk improves in the wake of better governance in many countries, market reforms and a greater openness to investment, competition is growing for companies building a pan-African presence.

Growth
There is increasingly a view that the risk is now not having a presence in Africa as the continent continues to promise robust growth, high returns on investment and low hanging fruit in almost every sector. The global financial crisis was a turning point for Africa as investors sought investment opportunities in high-growth emerging markets, many of which turned out to be on the continent.

As growth rates declined in developed countries, capital favoured key African markets such as Nigeria and South Africa looking for good returns. The optimism was backed by positive continental growth trends averaging 5% for a decade.

The International Monetary Fund forecasts slightly lower growth for Sub-Saharan Africa in 2015 of 4.9%, down from its original projection of 5.8%, rising to 5.2%. This is based on the economic impact of the downward spiral of oil prices since mid-2015, which has negatively affected oil producers, including Nigeria, Ghana, Angola and others.

"There is increasingly a view that the risk is now not having a presence in Africa."

The serious Ebola virus outbreak in West Africa has also had an impact on investor confidence. Although it affected mostly three tiny economies in the region, the impact was far broader, with many companies avoiding the continent altogether regardless of the minimal risk across most of it.

But despite some headwinds, foreign direct investment continues to flow into sectors such as consumer goods manufacturing, mining, oil and gas, ICT, agriculture and services. The African Development Bank estimated that FDI would reach a record $84 billion in 2014. Actual investment has not yet been calculated but even if it is lower than expected, the trajectory remains positive.

Multinationals from outside the continent continue to show an interest in African markets and are seeking local assets to expand their footprint or reduce entry risk or expanding their existing operations to counter rising competition.

Remittances
Africa's growth has also been boosted by the confidence Africans themselves are showing in the opportunities on their own continent. It was not that long ago that millions of Africans regarded their own back yards with caution, preferring to keep their money offshore and educate their children abroad. 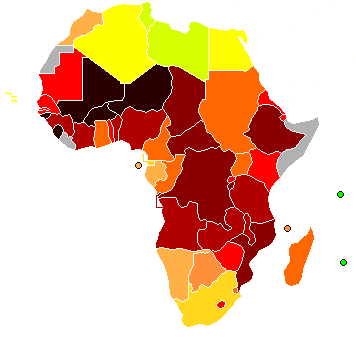 Although many of the estimated 30 million Africans who live outside Africa remain in their adopted homelands, the money they send home cumulatively has overtaken aid flows to Africa and played an important role in stimulating economic activity. In 2014, remittance flows to developing countries are expected to reach $436 billion, up from $404 billion in 2013. A large chunk of this goes to Africa.

"There is a tendency to overlook the fact that Africa is not a country, but 54 very different markets with many local nuances and specific challenges."

Companies that are making good returns on investment in African markets believe the risks of operating in Africa are overstated and that critics have failed to keep abreast of improvements in the operating environment. Some people believe that risk appears to be lower because risk management has become more sophisticated.

Regulations
But the best risk strategies cannot take account of all eventualities. A particular problem in this regard is the uncertainty of sudden regulatory changes that could have a major impact on the bottom line and upset long-range plans for a market. Keeping close to regulators and policy makers is one way to mitigate this but it is not fool-proof.

This underlines the need for companies to build in cushions for unexpected costs and to be as flexible as possible in terms of strategy without compromising the group ethic. Corruption and inefficiency along supply chains is another key factor that can be both unpredictable and costly.

Although political risk in terms of outright conflict has undoubtedly declined, arguably the risks have become more nuanced particular with regard to growing competition from local businesses. These include undisclosed private business interests of policy makers and politicians or the political influence enjoyed by local conglomerates.

Reform has been its own risk. While reforms are usually well intentioned - to improve and modernise the operating and policy environment - they can present problems to entrenched operators who face unintended consequences of reform such as new operating costs, local empowerment regulations and competition. This has particularly been evident in the resources sector. Security is not a new frontier in terms of African risk but the nature and aims of the combatants is changing.

Terrorism
For example, Nigeria, a country that is not new to conflict along its historical fault lines, is now battling a scourge that it is unfamiliar with - terrorism. Sea piracy is on the rise in West Africa while in East Africa, Kenya is also grappling with unpredictable extremists carrying out random bomb attacks, shaking confidence in one of Africa's pivotal states.

And then there is the risk of underestimating potential risk. Companies still tend to go into markets without doing sufficient homework on the full range of potential challenges, often accepting information and advice from desk-bound analysts with little experience of African markets.
There is also a tendency to overlook the fact that Africa is not a country, but 54 very different markets with many local nuances and specific challenges. Even the most rigorous business plans can run aground on the unique and complex set of circumstances in each of them.

This is a particular challenge for companies building pan-African operations and extending their footprint over multiple countries and regions. Risk may be lower now than it used to be but the management of what there is remains the thin line between success and failure in Africa's still challenging markets.