This article originally appeared as a Moving into Africa feature in the first ever CFO Magazine, launched in May 2015. For more information on advertising and editorial opportunities in the November issue, click here.

Businesses engaged in intra African trade, and those with aspirations to grow their businesses into new markets on the continent, are holding their breath for a big announcement on the establishment of a major free trade area, spanning the entire length of the Continent.

The big announcement, expected as soon as May 2015, will officially launch the Tripartite Free Trade Area, commonly referred to as the TFTA, covering almost half the continent's countries, with a combined population of some 625 million people, and a GDP of almost 1 trillion US dollar. The announcement on the launch of the TFTA is the culmination of 10 years of negotiations between member states of 3 regional economic communities, being the East African Community (EAC), the Common Market for Eastern and Southern Africa (COMESA), and the Southern African Development Community (SADC).

"Businesses are considering the opportunities offered by the TFTA as being paramount in planning their African expansion strategies."

The objectives of the TFTA rest on the following pillars:

The ultimate objective of the TFTA is to establish duty and quota free treatment of all products meeting the origin requirements of the TFTA agreement. The movement of such goods between member states will also be free of quantitative restrictions. Negotiations are ongoing on the rules that will determine if products have origin status, thus qualifying for free movement as envisaged, but timelines for implementation have not been finalised. 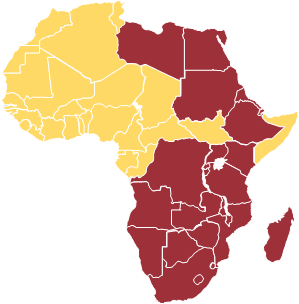 The TFTA is a major step towards the realisation of the African Economic Community.

Discussions around the principle of "variable geometry", allowing countries to progress to full integration along different timelines, are also proving to be problematic. It is foreseen that full implementation of the TFTA agreement can take up to 8 years.

Despite these factors, businesses are considering the opportunities offered by the TFTA as being paramount in planning their African expansion strategies. From an investment perspective African companies are now, second only to Western Europe, the biggest investor in Africa, accounting for 22% of Greenfield investment on the continent. Measured in deal volume, African Mergers and Acquisitions account for the biggest number of deals, and 21% of South African foreign FDI is going into Africa.

Intra African trade does however face a number of challenges, not least of which is the lack of trade finance when it comes to transactions being concluded, or having the potential of being concluded, on the African continent. This is featuring prominently on the agenda of the World Trade Organisation, with Director-General Roberto Azevêdo, in opening the seminar on "Trade Finance in Developing Countries" at the WTO on 26 March 2015, pointing to a recent WTO Secretariat paper indicating that trade financing gaps are "the highest in the poorest countries, notably in Africa and Asia". He said that "lack of development in the financial sector can be a significant barrier to trade", and told participants "let's redouble efforts to work together and resolve this problem".
Azevêdo noted that trade finance availability had largely returned to normal in major economies after the global financial crisis, but that smaller companies, in less developed countries are finding it more difficult than ever to access such finances.

On the issue of such financing gaps, Azevêdo said:

"I was particularly struck by the fact that the financing gaps are the highest in the poorest countries, notably in Africa and Asia. And I was struck by the size of those gaps.

A survey by the African Development Bank of 300 banks operating in 45 African countries found that the market for trade finance was somewhere between 330 and 350 billion dollars. It also found that this could be markedly higher if a significant share of the financing requested by traders had not been rejected. Based on such rejections, the estimate for the value of unmet demand for trade finance in Africa is between 110 and 120 billion dollars. This gap represents one-third of the existing market.

The main reasons for the rejection of requests for financing were:
 the lack of creditworthiness or poor credit history,
 the insufficient limits granted by endorsing banks to local African issuing banks,
 the small size of the balance sheets of African banks, and
 insufficient US dollar liquidity.

Some of these constraints are structural, and can only be addressed in the medium to long term. The retreat of global banks from Africa, and from other poor countries, is one such issue."

From a tax perspective, the landscape facing companies operating on the continent is also constantly changing. The debate around Base Erosion and Profit Shifting (BEOS) is gaining momentum, and a large number of countries have, in the last three years, introduced stringent anti-avoidance and anti-tax haven rules. The last five years have shown a reduction in corporate income tax rates from 30.6 % in 2009, to 28,6% in 2014.The UN has however set a target for African countries to achieve tax collections of at least 20% of GDP. Not surprisingly, Zimbabwe currently tops the list of tax collections as a percentage of GDP, at 49%. South Africa has achieved 27%, whilst Kenia is at 18%, and Nigeria and Angola are lagging at only 6%. With the fall in oil revenues however, tax revenue collection has received considerably more government attention in these countries.

The WTO estimates that the value of unmet demand for trade finance in Africa is between $110 and $120 billion.

Notably, as tax systems are becoming more sophisticated, Revenue Authorities are becoming more aggressive. The Africa Tax Administration Forum (ATAF) is now 38 countries strong, and mechanisms have been put in place to promote mutual cooperation between countries, and improve efficiencies in tax collection. The Forum also allows member countries to freely exchange tax payer information, improving enforcement of tax laws across the continent. International organisations like the World Bank, IMF and UK DFID are providing funding to Revenue Authorities to improve collection capacity, and broaden the tax base. In a survey recently conducted by KPMG within the CFO community, respondents have listed the Capacity, capability and accessibility of the Revenue Authorities on the continent as being the biggest challenge of doing business in Africa.

All things considered, these are indeed interesting and exciting times to be doing business on our continent!