“I was so happy to be here today because it has given me the confidence that we have capable financial skills here in South Africa,” said Dr Ivan Meyer, minister for finance in the Western Cape after attending the CFO South Africa event Risk, Compliance & Control Forum at the Cape Town Club on Thursday night. “This CFO forum confirmed to me that the CFOs in the public and private sectors are very capable.”

Meyer was initially muted on the country's ability to provide the skills needed to fulfil the objectives of National Development Plan (NDP) - a state program aimed at restructuring the South African economy. After attending the CFO South Africa event, including a breakaway session on public finance, he sounded more upbeat. He said one of the pillars of the NDP was to build a "capable state", which required solid financial managers. "In the current economic climate, you need financial resilience."

During his keynote speech Meyer warned the attendees that the current indicators for South Africa are not promising, something discussed in our most recent Editorial. The International Monetary Fund for instance, downgraded South Africa's GDP 2014 forecasts from 1.7 percent (July 2014) to 1.4 percent (in October 2014). "This was before what we heard about the problems at [power utility] Eskom and the strike in the Post Office," he noted. By comparison, emerging economies were expected to grow at 4.6 percent in 2014.

With the local economy in such a difficult state, it was clear that CFOs in both the private and public sector had to be on top of their game, said Meyer. He pointed out that in the public sector this was particularly difficult because there was seemingly a constant shift in personal. To prove his point, he asked the attending CFOs in the public sector how many have been in the job more than three years - only one person raised a hand. 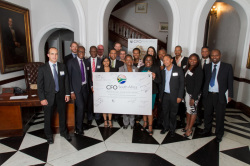 Besides the public finance round table, there was also a forum on economic development, led by Jonathan Lang, Practice Partner and Head of Africa at law firm Bowman Gilfillan. Dr Kerry Jenkins, director of advisory services at KPMG gave an impressive master class on risk, compliance and control, which addressed the difficulty of remaining complaint in an increasingly complex regulatory framework.

The evening was close off by Bob Head, acting CFO of South African Revenue Service, pitching Partners for Possibility, an organisation which matches schools with businesses managers in the hope they would provide support to the school's principal. He said being part of this program had changed his life he had become a close friend with, Jane Tsharane the principal of Makgatho Primary in Atteridgeville. It also taught him to be grateful for the opportunity that have come his way as well as to truly listen to people. "The session before this one, I was very, very quiet. And if it had not been for Partners for Possibility I would have been all over the bloody place."

To read about Bob Head's career and his love for Partners for Possibility, read the interview with him here.

See pictures of the event here