CFO South Africa chose to honour Simon Ridley (pictured), recently retired FD of Standard Bank and CFO of the Year 2014, as well as esteemed member of this year’s judging panel, by presenting him with a Lifetime Achievement Award at this year’s CFO Awards. Unfortunately, Simon was unable to accept the award in person and spend the evening celebrating with his peers, as he was touring Namibia on a motorbike at the time of the event. Simon’s colleague, Luvuyo Masinda, CFO Corporate and Investment Banking (CIB), accepted the award on his behalf. Masinda said:

"I'm sure Simon has interacted with a lot of people across the room here. He won one of the first CFO awards ever. There are a lot of us in this room who have worked with Simon as CFOs over the years. I'm sure he would be proud to receive this. We are certainly proud as the Standard Bank team to be here and to receive this award."

"As CFOs we need to be trusted advisors, rather than critics," says Simon, widely regarded as one of South Africa's most respected finance leaders thanks to a quarter of a century of CFO experience at Absa and Standard Bank. Over the last decades, Simon has seen the role of CAs change - but he emphasises that the basics still need to be in place. "CFOs and CAs need to switch from number crunchers to analysts to business partners. That doesn't mean just being a friend to other executives. It is crucial that we are myth busters," he says. "Often businesses believe in certain conventions, but assumptions or beliefs can be wrong and it is our job to test and challenge them." 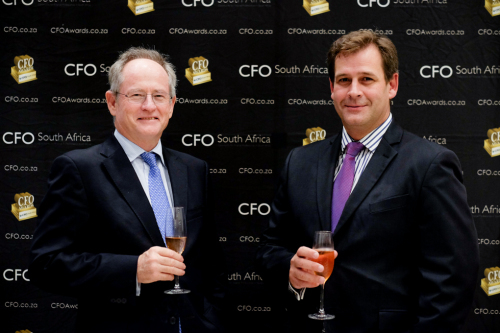 In his interview with the CFO Awards 2014 jury, Simon described himself as a "career CFO" who tries being an "absolute partner" to the CEOs without "usurping responsibilities". Simon was CFO at Absa from 1989 until 1999, when he joined Standard Bank as Director of Finance and Operations. He held the position of Group Financial Director from 2009 to 2016, retiring in April this year. Due to his longevity with the company, Simon played a pivotal role in numerous successful international acquisitions as well as disposals, sometimes of the same companies or assets.

Asked what tips he would give to ambitious CAs who wants to scale the corporate ladder, Simon emphasises the need for well-considered career choices. "I always tell our youngsters, 'Be honest with yourself about what you like and what you don't like to do. Otherwise there will be issues later'," he says. "The people that get to the position of CFO quickest are the most curious people. Never being satisfied with one answer and an irritating sense of curiosity are great assets for a finance leader. It is also important to work for someone who adds value to you. Don't make a career jump for money if you don't respect your prospective boss."

Watch a video from this year's CFO Awards evening.