Guests at the seventh annual CFO Awards were greeted by the sounds of a marimba band and a green expanse of polo fields under summer skies at the Polo Room at the Inanda Club. South Africa’s top CFOs enjoyed cocktails and conversations before the start of the awards ceremony, also known as the “Oscars of the finance community.”

The night was a much-needed celebration of “world-class finance in action” as the CFO South Africa community gathered for the first and last time this year, more than a half a year after the CFO Awards event was initially scheduled. The year 2020 will be remembered for Covid-19 turbulence during which finance leaders needed to step up as the financial stewards of their organisations.
CFOs donning slick tuxedos and gorgeous gowns were treated to sushi canapes and bubbly before entering the ballroom. The room was decked out in black and white accented with daylilies, succulents and candles. The three-course menu was curated by leading Johannesburg caterers Word of Mouth. 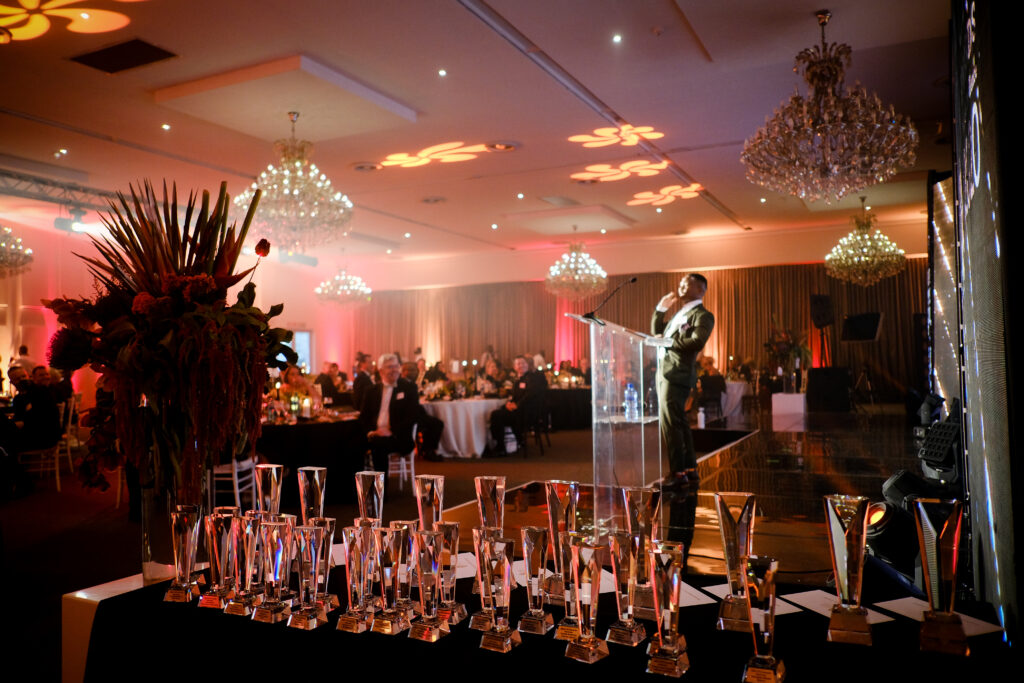 World-renowned comedian Loyiso Madinga, the South African correspondent for the Daily Show with Trevor Noah, kicked off the event as the master of ceremonies. He quipped that the best thing about 2020 is masks – allowing all South Africans to show off their beautiful eyes. He kept the crowd entertained with a steady stream of jokes and surprisingly good karaoke. 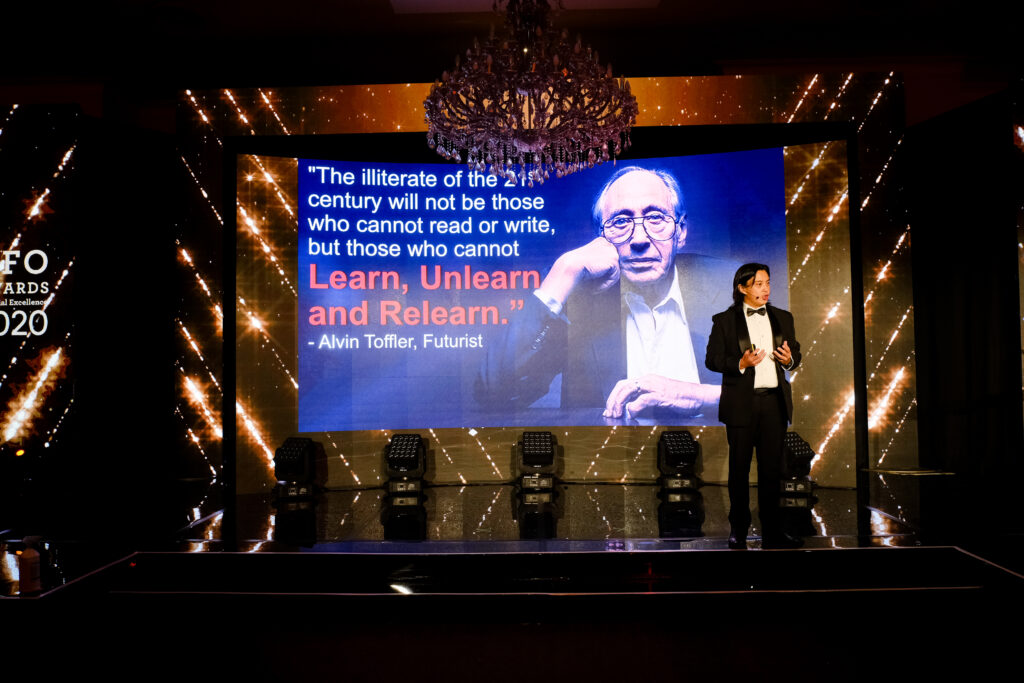 Craig Wing, futurist and partner at FutureWorld International, was the night’s keynote speaker. The title of his talk was ‘Stepping into the future’ and he spoke about technologies that will impact the world in the coming years. These include artificial intelligence, which according to Craig, will have a more profound effect on humanity than the discovery of fire. 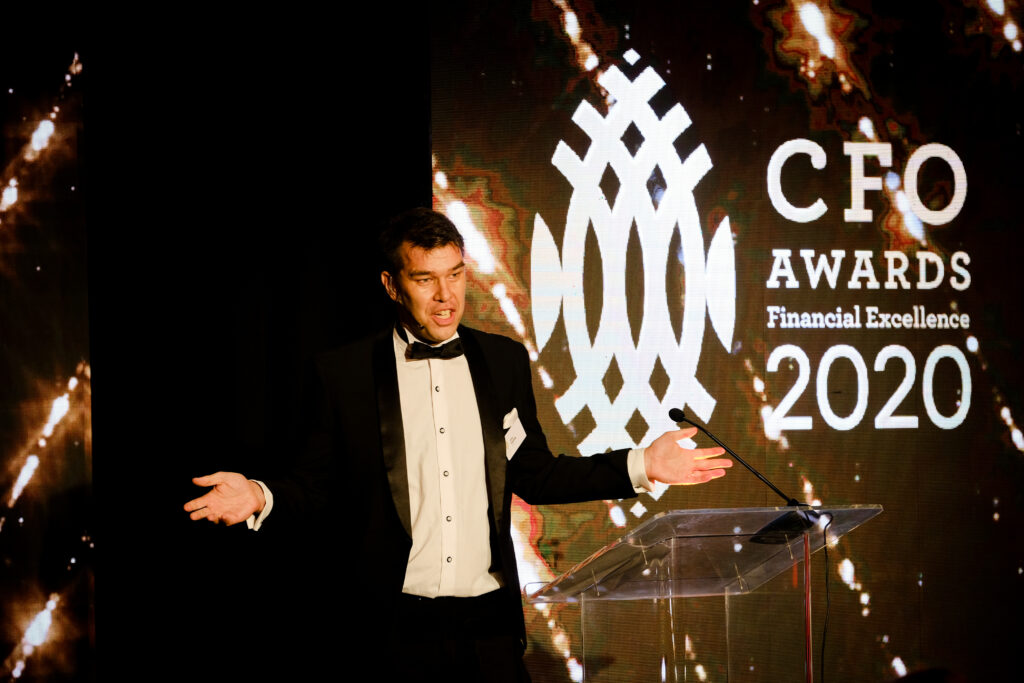 This year there were 25 nominees, a record number for the awards, from a range of listed, private and public sector companies. Highlighting the importance of these awards, the MD of CFO South Africa, Joël Roerig said that the event was a salute to notable achievement in the finance industry:

“This year has been a defining year for CFO South Africa. We have provided value throughout the year through regular online engagements. Tonight is a celebration not just of our exceptional nominees, but also of South Africa’s finance professionals as a whole. You continue to demonstrate that our professionals can stand shoulder to shoulder with those who are driving and supporting business around the world.”

He acknowledged the panel of judges for their invaluable time and effort in giving the CFO Awards the prestige it deserves. Joël also thanked the many companies who made the CFO Awards possible. Principal sponsor Deloitte has headlined the awards for the fourth year in row. Award sponsors include CaseWare Africa, a division of AdaptIT, PwC, SAP Concur, Standard Bank and Workday. The CFO Awards associate partners include Coupa and Jaguar Land Rover. 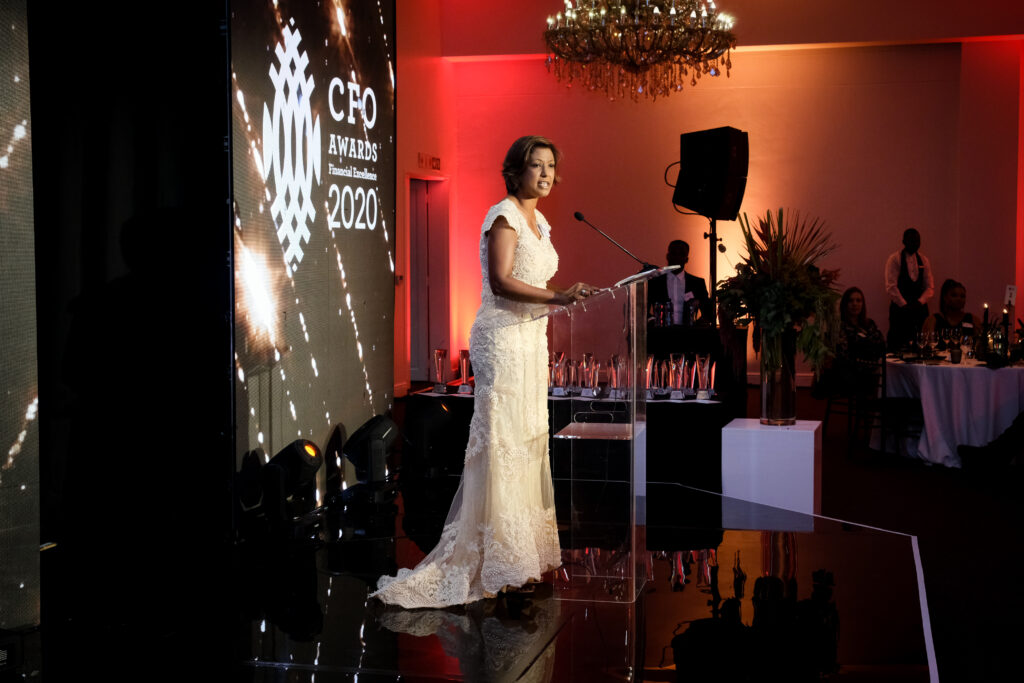 Ruwayda Redfearn, the new Deloitte Africa Board Chair, speaking in the opening address, underlined Deloitte’s continued support of the award as a sign of the firm’s commitment to South Africa’s finance community.

“Remember when we thought that 2019 was a hard year? I have missed the collective energy of some of the smartest minds in finance. We are here to celebrate you. I am really impressed by how the role of the CFO has evolved. CFOs play a role in driving the company’s strategy in South Africa and beyond our borders. They’re also involved in the digital transformation of their organisations. CFOs are no longer bean counters, but rather bean planters who watch their ventures grow. The CFO Awards are an important moment to celebrate excellence.” 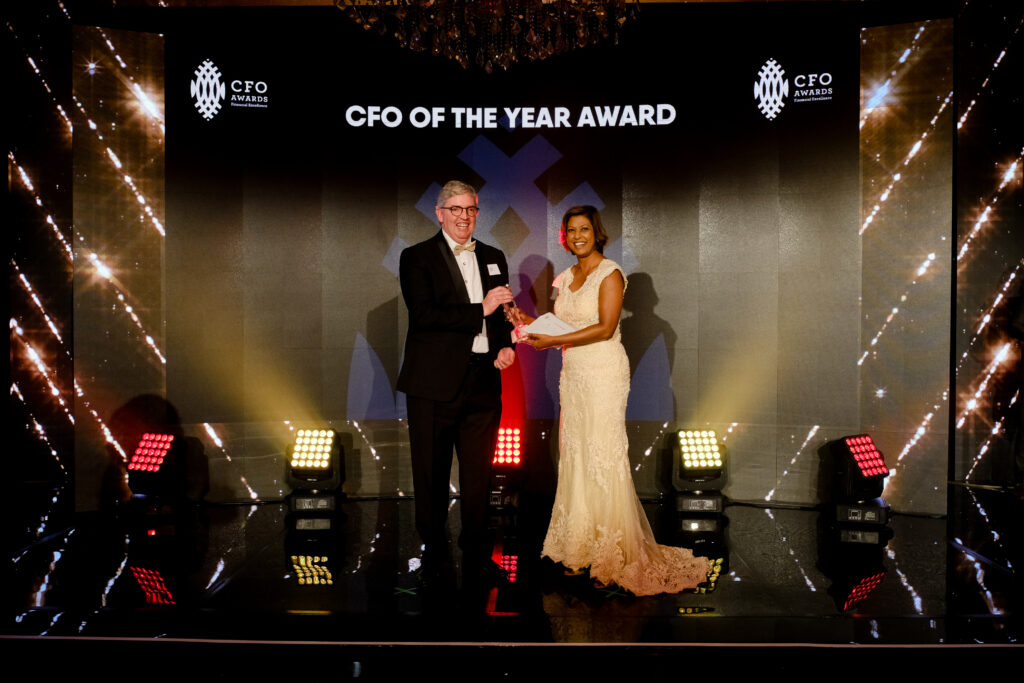 Winners
The big winner of the night was Jason Quinn, the group finance director of Absa, who walked away with the prestigious CFO of the Year Award. He scooped up three of the ten prizes, also winning the Strategy Executive Award and Moving into Africa Award.

“I am truly humbled to receive this award. Thank you to Joël and the team at CFO South Africa. I’d also like to thank my team at Absa as well as my wife and kids,” said Jason.

Jason has been the group finance director of Absa for the past four years, having been the head of finance for two years before that. He played an instrumental role in the separation of Absa from Barclays, a $1 billion multi-year programme. 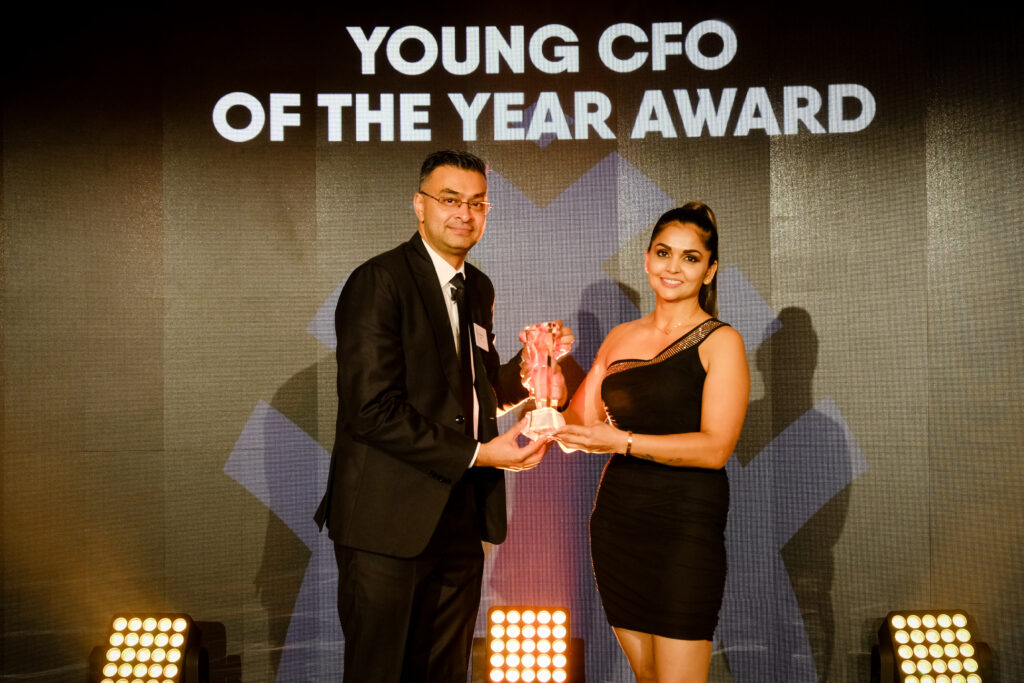 Shabeer Khan, the CFO at the Department of Trade and Industry, was also a big winner. He received the Young CFO of the Year Award, the Public Sector CFO Award and Compliance & Governance Award. He acknowledged his finance team and the minster for the support that enables him to succeed.

“It is such an honour to be recognised by the finance community. It’s especially amazing to win the Public Sector CFO Award, especially in such a difficult year. Thank you to CFO South Africa for recognising public sector CFOs and public servants in general.” 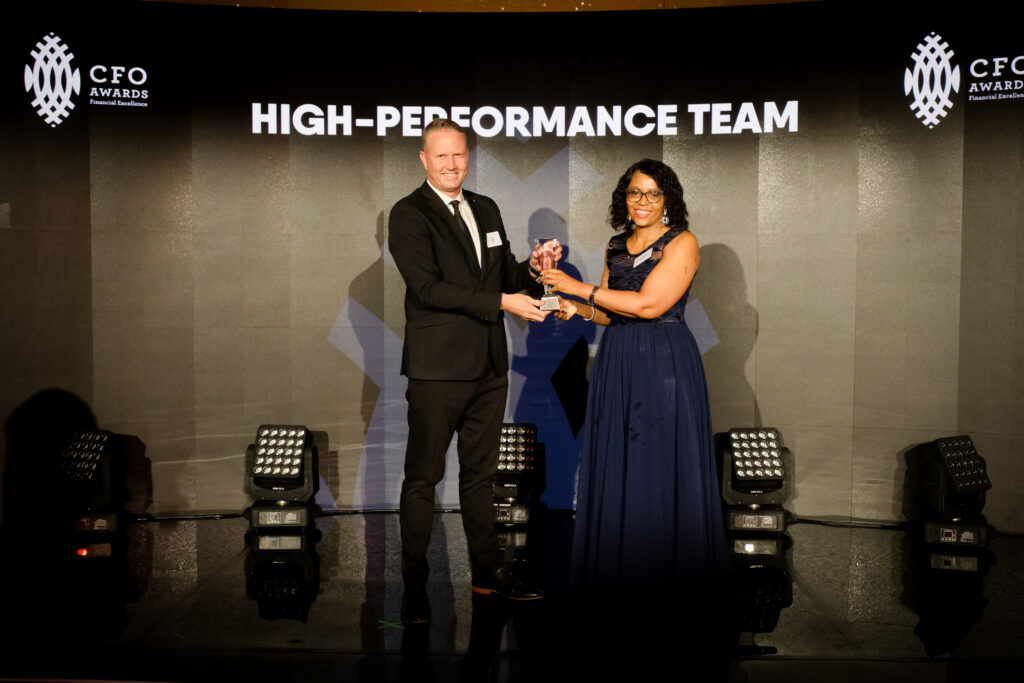 “Thank you to CFO South Africa for keeping us interested through our community conversations. Thank you to my team, I certainly wouldn’t have done it without them. When I recruit, I always look for people who are better for me.” 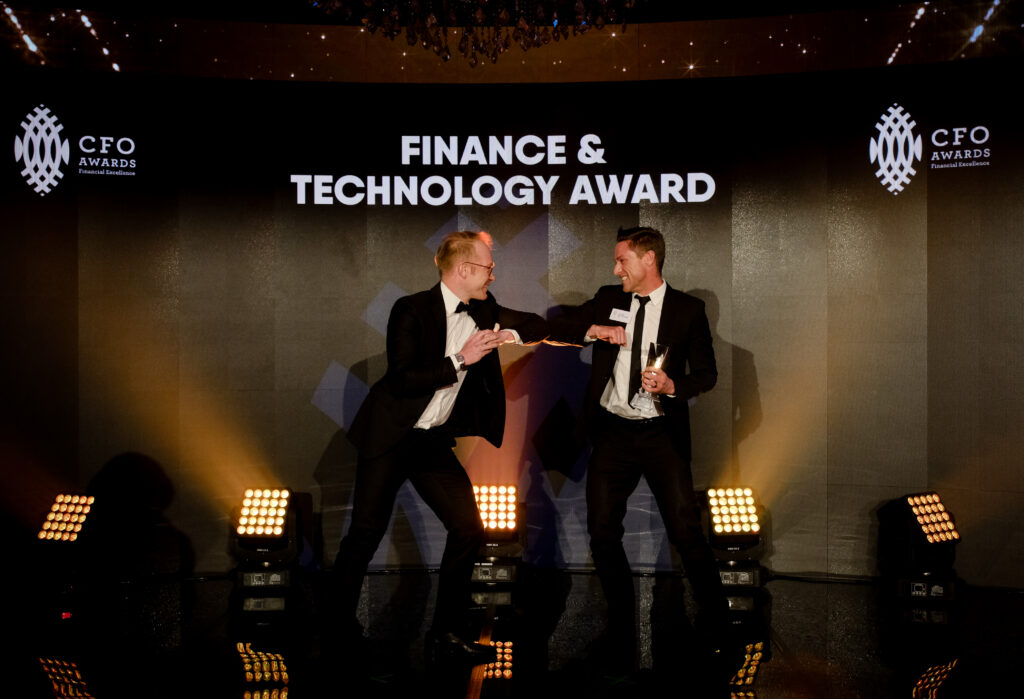 The CFOs in attendance were delighted to have spent an evening in the company of their community, celebrating the achievements of their peers. As the only in-person community event held this year, the CFO Awards delivered.